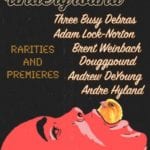 While there is truth that “beauty is in the eye of beholder”, perhaps that there is too much truth in that for Adam Lustick of Havard Sailing Team.

See for yourself in their new sketch here.

Lo and Behold, There Is a New Video/Sketch/Short/Offering from Stella

David Wain, Michael Showalter, and Michael Ian Black reunited for the most recent SF Sketchfest to give us and the whole world a new piece from Stella, their renowned sketch troupe.

We could you give more description/explanation, but we’re betting that you’re already watching it rather than reading this, so we won’t waste anymore of your time and just allow you to watch the new “Rip Van Winkle” from Stella.

Max Azulay, Alex Mullen, and James Corbett or, together, Insecure Morons, offer up their latest video that sums up why party small talk usually sounds way better in your head than it does when it comes out of your mouth and makes whoever your talking to very ill at ease.

Los Angeles’ own highly touted LA Film Festival is coming up in June 2016 and they’re now taking submissions. While they have traditional categories of feature films, short films, and documentaries, they’re also be accepting, with some caveats, various web videos/series/digital content that we’re sure you all have.

Get details and submit here.

Women Comedy Continuing To Run Round The Whole Internet and Are Now at CC:Studios

Women Comedy continue to spread their much needed brand of comedy at every corner of the web.

First it was just their YouTube channel, then IFC, then Funny or Die, and now, Dave/Jake/Allen/Pat are at Comedy Central’s CC:Studios.

Your browser does not support iframes.

Already, they’ve got a pretty good thing going with:

In those videos, you’ll see that Internet Action Force works with a lot of other funny folks including Team Submarine, Subhah Agarwal, Anna Drezen, Robert Dean, Sabrina Jalees, and more.

So, spend some time getting to know Internet Action Force as they seem pretty cool.

The Star Wars Force Awakens trailer has got pretty much all of us excited about a galaxy far, far away again, especially since there are all these brand new developments.

Hush Money Shows Why Bars Are The New Tower of Babel

Most bars are way too loud from the music blasting from the speakers at an unreasonable volume and the collective voices of dozens of people trying to shout over said music.

That’s why talking at most bars are not great for actually communicating any sort of information. In fact, it might just be like the Tower of Babel when everyone was speaking a different language as Hush Money clearly illustrates here.

Don’t Stay Too Late at The Offices of Good Cop, Great Cop

With the hilarious NYC based Good Cop Great Cop, there is no telling what goes on after hours in whatever offices they work at.

Well, there was no telling until they made a video “documenting” it and it turns you that you probably don’t want to stay too long after clocking out.

We all know finding someone to open up to in a relationship is a scary thing and, often times, we hold back more than a fair share of revealing information for fear of scaring the other person away. While that instinct should sometimes be minded, holding back too much information can be way more awkward.

It’s either that or Matt Ingebretson has way too many secrets. Watch this great short with Wendy McColm, directed by Johnny Izzo and see for yourself if we or Matt are being too secretive.

Grant Pardee Thought He Wasn’t in An Internet Sketch…

You probably watch so many internet sketches, web videos, etc. that it’s feasible that your whole reality has been altered and you wouldn’t know the difference.