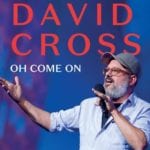 You might have heard that David Cross is going on a massive Oh Come On Tour across North America.

Well, while you might have a bunch of chances to see him live this year (that flyer has 46 cities listed), don’t be surprised to see tickets get snatched up quick.

The LA stop of the tour will be at The Orpheum Theatre in DTLA on Saturday, August, 18th with tickets at $39. Go get them here now.

Not only will many of those get to see Nathan Fielder present season 4 of Nathan For You right before it premieres, but he’ll be taking your questions (and we’re sure you have plenty) all throughout North America starting next week.

Chris Gethard Started a Petition to Change the Name of “Washington, D.C.” to “Washington, Marvel” at Comic-Con

This weekend, Chris Gethard and The Chris Gethard Show made a trip to The San Diego Comic-Con with an important mission: convince people that the name of our nation’s capital, Washington, D.C., to Washington Marvel.

Gethard and company started a petition and went on the Comic-Con floor to see if they could get signatures. Watch what happened here.

If you want to join the cause, you can sign the petition here.

The last of this week’s plethora of comedy releases that you need to shell out for is definitely something you’ve probably haven’t seen or heard in comedy. The very funny Ryan Conner went ahead and recorded his comedy album Johnny Cash style by going to an old prison to perform.

Live From an Old Prison was recorded at Lorton Prison near Washington D.C. To our knowledge, while many comedians have served time in a correctional facility and have even gone back to perform for others that have been jailed, we don’t know of any that actually recorded an album or taped a special in one.

On top of that, Ryan Conner’s got one hell of a life story that you should hear about in his comedy.

So, get his album on iTunes, CD Baby, or pay what you want starting at $1 at Gumroad.

Though you might have not heard from Tig Notaro as of late, trust that she’s been busy at work behind the scenes. Not only has she been working on her stand up quietly as well as her Showtime series doing shows at people’s houses, but she’s also curating a comedy festival for BrightestYoungThings.com called the Bentzen Ball Festival to be held in our nation’s capital Washington D.C Oct. 10th-13th.

So far, there will be Jon Dore, Doug Benson, Wyatt Cenac, Everything Is Terrible, and Ira Glass slated to perform much much more to be announced and there are limited tickets on sale.

You might not want to miss this if you’re anywhere along the Eastern seaboard.