Sure we all know and loathe Internet trolls, but the anonymity of the Internet keeps their actual day-to-day lives largely a mystery (though it’s hard to imagine that it’s anything all that desirable).

So, Henry Zebrowski (Last Podcast on the Left, Your Pretty Face Is Going to Hell) along with Natalie Jean and Seena Ghaznavi had created a 5 ep. web mini-series called Trollville that imagines the sort of life that someone who spends much of their day obsessing over ruining everyone else’s day online.

From the looks of the trailer, Zebrowski seems to play an Internet troll perfectly.

If you’re digging it, you can buy/rent eps. of Trollville on Vimeo on Demand right now.

Sure we all know and loathe Internet trolls, but the anonymity of the Internet keeps their actual day-to-day lives largely a mystery (though it’s hard to imagine that it’s anything all that desirable).

So, Henry Zebrowski (Last Podcast on the Left, Your Pretty Face Is Going to Hell) along with Natalie Jean and Seena Ghaznavi had created a 5 ep. web mini-series called Trollville that imagines the sort of life that someone who spends much of their day obsessing over ruining everyone else’s day online.

From the looks of the trailer, Zebrowski seems to play an Internet troll perfectly.

If you’re digging it, you can buy/rent eps. of Trollville on Vimeo on Demand right now.

Fresh from Megan Koester and Joshua Turek comes Mommy to Brayden, a sharply satirical short film that’s as “tapped into the Zeitgeist” as can be while also unapologetically poking at such a notion at the same time.

Throwing Shade, the popular podcast and TV series as opposed to just the act, are adding a documentary following a recent live tour that they embarked across North America.

The hosts, Erin Gibson and Bryan Safi, are the driving force behind Throwing Shade’s success. As such, catching them on and off stage is worth a whole documentary from director Michael Blieden.

Get a taste of what that’s like (as well as what it’s like to tour as a podcast these days) in this trailer.

Then, look for Throwing Shade Live to stream on Vimeo-on-Demand for $2.99 this Thursday, June 8th.

Dark, surreal, and altogether hilarious, 555 is absolutely worth the $3.99 price tag for five short films/mini-series episodes.

The comedic triumvirate of Kate Berlant, John Early, and Andrew DeYoung do not disappoint and have satisfying echoes of Todd Solondz throughout each short/episode.

Get 555 on Vimeo on Demand right now, right here. 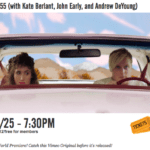 Kate Berlant, John Early, and Andrew DeYoung are giving a special sneak preview of their upcoming Vimeo web series, 555, next Wednesday at Cinefamily.

It’s a collection of short films that fall under the umbrella of the surreal that is Hollywood starring Berlant and Early, two comedians that tangle with the surreal with abandon.

Vimeo continues to be on brand with their high-minded picks in comedy.

John Early and Kate Berlant are working on their own short form series that will be released exclusively on Vimeo, which doesn’t need any more details to get you intrigued. You’ve probably seen them do work solo on Netflix’s Characters and together in such works as Dinner Party.

While Trevor Noah is making waves as the host of The Daily Show, South Africa has another comedy export coming our way in the form of a stand up special from another one of their biggest comedians, Loyiso Gola. Set to tape next week on Wednesday, September 28th at House of Yes in Brooklyn. Tickets available here.

Finally, the world now has a Henry Phillips special at its finger tips. For years, we’ve enjoyed Henry’s sly hijinks-laden humor and in Neither Here Nor There, directed by Steve Feinartz, that wonderfully mischievous spirit has been crafted into a very solid hour of stand-up and musical comedy.

Do yourself a favor and spend either $7.99 to stream and download Neither Here Nor There or $4.99 to stream over a 48 hour period right over at Vimeo on Demand.

Vimeo-On-Demand has just made Trying To Be Special, a comedy special that follows Riki and Kate trying to make a special, available to rent or buy.

Also, as you can see from this opening title sequence/dance number, Anthony Jeselnik is also featured.

Intrigued? More than intrigued? Already intrigued before you read any of this

Good. Get Trying To Be Special here.

For something that’s entitled Trying to be Special and features a lot of supposed behind-the-curtain action as well as some roasting from Anthony Jeselnik, Garfunkel and Oates’ very first special actually does look quite special.

See for yourself what Riki Lindhome and Kate Micucci in the trailer.

When that has you hooked, you can pre-order the special on Vimeo for $8.99 before its release on Thursday, May 5th.

Garfunkel and Oates To Do Their First Comedy Special at Vimeo

Riki Lindhome and Kate Micucci of Garfunkel and Oates are finally getting their first comedy special. After nearly doing everything else (albums, tours, TV series, etc.), Vimeo will be releasing a special where the duo will cleverly be doing a fundraiser that would supposedly raise the money for the special that they’ve wanted to be doing all along.

Look for Garfunkel & Oates’ Trying To Be Special to start streaming on Vimeo in May.

Amidst the din of online content, Vimeo, where High Maintenance got found, is getting its content wheels turning.

SNL’s Aidy Bryant will be writing and starring in a surreal short film where she works in a fabric store and is dreaming of finding love.  Drag queen and comedian Bianca Del Rio is also getting a stand-up special, which will be a first for Vimeo as well.

Given the company’s penchant for top shelf content, we’re really curious to see what they got cooking.

There’s no more appropriate place and time to unveil the trailer for a web series that’s about going to fan conventions than when the San Diego Comic-Con is happening.

So, Alan Tudyk has released the trailer for his amazingly crowdfunded web series Con Man that follows the life of a once great sci-fi TV star and the fan convention circuit that he travels around in years after the show was cancelled.

From the looks of it, we’re thinking this could be The Comeback for the nerd world.

You can pre-order it now before its release of Vimeo on Demand on Sept. 30th.

There have been a number of iterations of a JASH variety show now known as Rubberhead over the last year including the period of time it was a show for XBox.

After jumping through, in, and out of hoops, JASH’s Rubberhead with Sarah Silverman as the host is now available to watch for $5 over at Vimeo.

The beloved riff fest between robots and humans over the worst movies of all time in Mystery Science Theater 3000 is coming all to Vimeo. You are now able to buy or rent the 80 digitally available episodes of MST3K. The other 118 are awaiting clearance for digital distribution, but will also be available at Vimeo when they do indeed clear.

So, the $300 for the series and whatever becomes available on Vimeo will be a popular gift this Christmas.