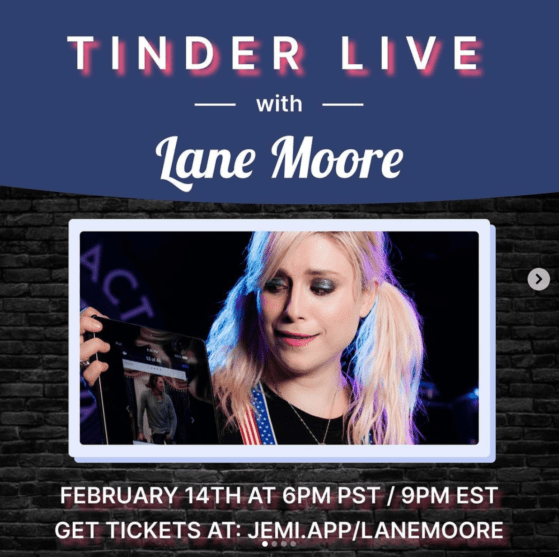 Pick of the Day: Tinder Live with Lane Moore on Valentine’s Day

For all the feels that Valentine’s Day brings up normally (that are especially amplified by the isolation), one of the perfect shows for this particular lockdown tinged edition of Valentine’s Day is Lane Moore‘s wildly fun Tinder Live!

If you’re unfamiliar, Lane makes a show out of navigating through Tinder, matching and messaging folks of all kinds and following wherever those rabbit holes lead, narrating the whole way through. It was one of the most fun things to see before the pandemic and we think it’ll be one of the best livestreams to catch on Valentine’s no matter what you’re situation is (i.e. quarantining with or without someone).

This round of Tinder Live! is set for Sun. Feb. 14th at 6PM PT/9PM ET. Tickets/live-stream access are $20 and you very much should go snag them here. 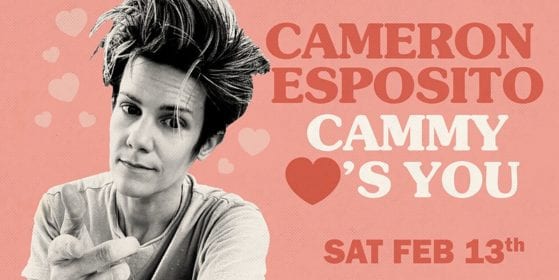 The warmth and candor of Cameron Esposito, for our money, is pretty unmatched in all of comedy. Truly, an evening with Cameron Esposito that she shares stories/stand-up/etc. is one that you should most certainly take.

So, despite a card company popularizing Valentine’s Day, sanitizing it from its dark past, and forcing the world to go through perfunctory acts of affection, Valentine’s Day weekend could be just actually lovely with a special live-stream with Cameron Esposito via Dynasty Typewriter. 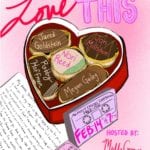 You’re Gonna Love This might be the perfect comedy show to go see on Valentine’s Day?

You’re Gonna Love This, presented by Maddie Connors & Katy Fishell, has female/queer comedians present all the sorts of things that their significant others tried oh so hard to get them into (whether it’s the sort of thing that they would love or not).

It’s a tribute to loves past, but also a justified dissection of a perhaps ridiculous thing that they had to “go along with”.

For this special, Valentine’s Day edition, they have a wondrous line-up Megan Gailey, Jared Goldstein, Robby Hoffman, Nori Reed, and Jon Millstein who we’re sure have some hysterical things about the things that they were forced into liking.

Tickets are $10 (and they usually sell out). So, go get your tickets right here, right now.

The fine folks at Big Mouth will be delivering a Valentine’s Day special a week before Valentine’s, specifically Feb. 8th, called Big Mouth: My Furry Valentine.

As is the prerogative of the show, we’re sure it’s going to show you what Valentine’s is like for pre-teens, warts and all. Whether you love or hate the holiday, there should be something that hits close to home for how ridiculous that day is. Get a taste of it here. 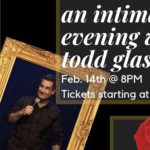 When it comes to setting the mood in comedy, few pay as much attention to detail as Todd Glass (there’s a whole mini-doc about it).

Thus, he might be the perfect choice for a Valentine’s Day comedy show, which, thankfully for you, is happening at the world famous Hollywood Improv. In fact, whether you’re in a relationship or not, we’ll bet that Todd will make it a great night.

Chris Fleming made us all feel a little less lonely with this video.

Enjoy and follow(?) these Valentine’s tips for a specific romantic issue from Fleming.

We thought, as it is Valentine’s Day, that it would only be appropriate to share this fantastic story from Comedy Central’s This Is Not Happening of how love twisted Louiz Katz inside out and produced a more hardened, embittered soul after it spat him out.

In a way, this story just shows how powerful love is. 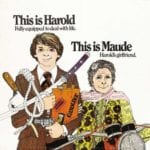 Watching Harold and Maude in a theater seems like the perfect compromise between couples celebrating the corporate invented Valentine’s Day and bitter single people that spend most of the holiday angrily muttering under their breath. 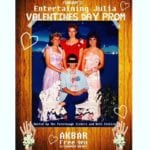 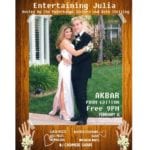 If you have bad memories of prom or Valentine’s Day*, let the Puterbaugh Sisters and Beth Stelling fix that right up for you with a Valentine’s Day Prom edition of Entertaining Julia at Akbar.

There will be a great comedy show and a Valentine’s Day Prom dance party right after. Best of all, the whole shindig is free to attend. 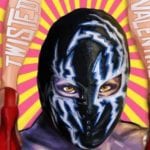 Lucha VaVoom’s first show of 2017 will be a “Twisted Valentine” combining, as always, Mexican masked wrestling, burlesque, and comedy.

Between their two shows on February 8th and 9th at The Mayan, you’ll get Ron Funches and Dan Harmon will join hosts Blaine Capatch and Jeff Davies on top of all the crazy, high flying action that will be going down.

Get your tickets fast as Lucha VaVoom tends to sell out. Tickets are going for $40-$55 here.

On The Horizon: “Harold and Maude” Screenings 2/14 (Valentine’s Day)

What better way to observe Valentine’s Day than to watch Hal Ashby’s 1971 classic Harold and Maude in a theater?

It’s screening at both The Egyptian Theatre in Hollywood and the Sunnyside Cemetery in Long Beach at 7:30PM. Tickets are $11 and $12 in adv./$15 at door respectively.

For full LA comedy listings, check the calendars and maps at www.thecomedybureau.com

On The Horizon: Tomorrow! with Ron Lynch presents A Special Valentine’s/Anniversary Hook-Up!

One of LA’s longest running midnight comedy shows hosted by one of LA’s comedy treasures, Ron Lynch, does a delightfully mutated version of The Dating Game in Hook-Up!

Whether you’re into Valentine’s Day or believe that it’s a corporate mandated holiday that constricts us all into the idea of monogamy, it’s great to see a dating game that pits someone looking for love around a bunch of crazy people.

Here is another fantastic Conan O’Brien remote segment where he actually delivers flowers to a fan who almost loves Conan more than her husband. 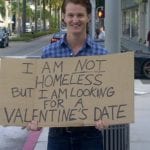 I feel better now, especially since I heard that this guy hits the streets of LA EVERY VALENTINE’S DAY! (via Johnny Gold)

Misery is a Self Centered Wanna-Be: A Cautionary Tale to Comics on Valentine’s Day

Part of the ongoing series “I Know What You’re Thinking… (No, You Don’t)”

I hate this day.

There are several reasons as to my loathing to this particular day designated as one where couples far and wide are reminded to pronounce or rekindle their love with the significant other they so luckily have.

1) I’ve never had a girlfriend.

2) I’m already a bitter person. EX. In high school, a girl during Honors Algebra 2, doodled a representation of my being as a sad bunny stabbing itself beneath a rain cloud.

3) Most of I’ve ever gotten out of women: You’re a really good friend.

Almost needless to say, I’ve never had someone “be my Valentine” and have always chosen to deal with fleeting demonstrations of deep public affection between people for the duration of Valentine’s Day by purposely being alone like it was some badge of honor, though I’d grumble about the whole ordeal like the bitter old man that uses his cane to shush younger people living above or below him that I sometimes think that I am.

This behavior was magnified probably 10-fold since becoming a comic as a large component of comedy is finding the accepted inconsistencies within society and then essentially complaining about them.  Thus, I’ve become even more prone to being critical of the happiness of people in relationships.  EX. I’ve made such proclamations on stage that I’d simply like to yell at people holding hands and that there is no such thing as love; there’s only settling.

Last Thursday, I saw the lovely, talented, and hilarious musical duo of Garfunkel and Oates at Largo and heard their song “I Would Never (Have Sex with You)”, which is about how being “just" friends between men and women will never amount to anything.  This is basically every extended amount of interaction I’ve ever had with women and, as such, you might think that I was horribly offended by such a song.  Though it was painful hearing the lyrics, "Remember the time we went to Dave and Busters and played Dance Dance Revolution until we won a keychain?  Let’s do it again… but there is a bigger problem… I would have never sex with you,” I laughed so hard that I nearly broke into tears (emphasis on nearly).

It wouldn’t be fair to say that I’ve turned a new leaf completely as I’m probably going to end up eating pancakes and tweeting in some 24 hours diner tonight, but instead of perpetuating my own misery in single-dom, I’m now looking to “take the high road” and trying to eschew my own negativity (emphasis on trying), wishing the best to those in love.  I realized that spreading contempt, even ironically, in the end, only comes back to the person originating and the happy couple will just move on.

So to those comics out there spending Valentine’s Day alone in this vast disconnected metropolis, I’d urge you to hold off from knocking back a tall boy with your eggs and watching 500 Days of Summer after watching the lesser known dark romantic comedy Dedication (NOTE: I’ve only done these things on separate occasions) because it’s only going to make you lose followers on Twitter and leave you still feeling miserable flirting with suicide. Instead, if a pair that seems particularly beaming after they just finished engaging in arduous embrace makes eye contact with you, just smile.

With all of that being said, I still hate this day.