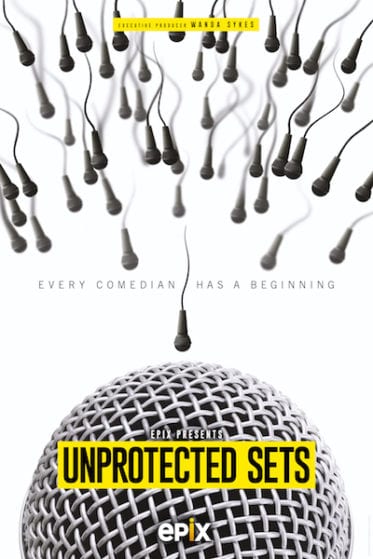 Whatever rules we all had for everything at the beginning of 2020 are most certainly thrown far, far out the window. With TV, there seems to be a new precedent set new every day and that certainly includes the planned transformation of a TV series into a podcast as is the case with Unprotected Sets.

With Wanda Sykes attached as EP, this was Epix’s stand-up comedy showcase series that highlighted names that you ought to know as they were coming up through the ranks in comedy. Now, as the challenges of going into TV and film production in a pandemic are challenging in a way that no one here in America has had to deal with before, Epix has indeed opted to make the series into a 12 ep. podcast audio series.

There have been a handful of stand-up comedy podcasts as well as an entire channel or two on SIRIUS XM dedicated to stand-up comedy, but we’ll be highly curious to see how this audio series fares having formerly been a TV show. There’s currently no word on the line-up or exactly how it will be produced (i.e. over Zoom or something over live-stream method or socially distanced, outside in person or, maybe, just include best of clips from pre-pandemic times of their chosen comedians).

You won’t have to wait long to find out as the audio only version of Unprotected Sets will launch next week, Wed. Aug. 5th.

As Netflix has spent much of their cache in stand-up comedy on the biggest names around and stand-up seems to unfortunately be mostly an afterthought in late night, there is a growing window for other folks to tap into comedians that have yet to get their first break.

Epix is going in on this opportunity with 12 episodes of a stand-up showcase series called Unprotected Sets with Page Hurwitz showrunning and Wanda Sykes EP’ing focusing on comics on the rise.

It’s interesting to note that they won’t be shooting in America’s comedy hubs of LA, NYC, or even Chicago, but, instead, in Portland, San Diego, Washington D.C., Atlanta, and Minneapolis.

No word on who is on the show as of yet, but you’ll definitely know when the show premieres on Friday, October 5th on Epix.