Tonight, tune in at 10PM on TBS or 8PM PST on a Twitter livestream (with a 6PM PST red carpet) for Samantha Bee and Full Frontal doing their own White House roast, The Not The White House Correspondents Dinner.

Nothing like this has been really done as other presidents, even Bush, show up to the White House Correspondents Dinner and make that spectacle enough for the weekend.

It would be great to see if the ratings for both Sam Bee’s Not The White House Correspondents Dinner and the actual WHCD with host Hasan Minhaj got “fantastic ratings”, partially because Trump wasn’t there.

Vine App Discontinued and Has Now Become the Vine Camera

Vine App Discontinued and Has Now Become the Vine Camera

“On January 17 the Vine app will become the Vine Camera. We will notify you through the app before this happens. The Vine Camera will allow you to make 6.5 second looping videos and post them to Twitter, or save them to your camera roll in a logged out state. You will not be able to do any of the other things you can currently do with the Vine app. Once the Vine Camera is live, you will no longer be able to download your Vines from the app. “

Maintaining the looping video function, but then forcing it to be fed through Twitter to be shared is Twitter’s way of catching up with Instagram and Snapchat, right? Snapchat already has exclusive comedy content through their app, including a few series from Comedy Central, leaving a lot of ground to cover for a Vine Camera + Twitter combo.

We’ll just have to wait and see if the hardcore Vine users will stick with this new format or if they’ve already jumped ship to other apps and will keep it that way.

Slightly rolling back on their announcement that Vine will be closing up shop, Twitter has now announced a glimmer of hope for the app pending a decision to sell the app off.

The likelihood of this is happening is up in the air, but keeping Vine around without having to maintain the app on their end should prove beneficial to Twitter.

If it does get sold off, it will be intriguing to see it compete with the likes of Snapchat or Instagram Stories or any number of other apps for short form videos after Twitter announcing its final days had been numbered.

That does technically mean you could still have a chance to be a Vine star.

Vine Will Be Discontinued as Part of Twitter Restructuring

Vine Will Be Discontinued as Part of Twitter Restructuring

For now, you can still watch your favorite Vine videos. How long that will last has yet to be determined.

Vine, the platform that allowed six second videos to be made, uploaded, and shared spawned a whole new subgenre of comedy, allowing for what could be considered “visual one-liners”. However, the arrival of Snapchat, Instagram Stories, Periscope, etc. must have made it difficult for Vine to be as popular as it once was.

So, Vine is getting a pink slip though the app and all of the Vines, as mentioned above, are currently still online.

We have no doubt that many of the most celebrated Vines will live on in .gifs and Vine compilations, but we’re not sure about the likelihood that something exactly like it will take it’s place in the near future.

For comedians of any ilk, Twitter offers a platform for tweeting joke premises or jokes. Sometimes, they even establish a different off-shoot of their comedy altogether that involve something like RT’ing corporations that offer well wishes on 9/11 like Joe Mande. It has given a whole new generation of comedy a different way to be funny and has helped get people like Megan Amram and Rob Delaney notoriety that circumvented many industry gatekeepers.

With a potential 10,000 feature that might come up for the microblogging giant that simultaneously would allow much longer jokes, entire stories, rants, much longer lists, even more complicated emoji messages, etc. The effect, whether positive or negative, which might take away from the brevity that is at the core of Twitter’s brand, would have to be seen if Twitter opts to go forward with this move.

Just to give you some perspective, this whole post is 829 characters.

Jun. 23rd, the day that Another Period premieres on Comedy Central isn’t that far away.

To gear up for it, you can start familiarizing yourself with The Bellacourts, the old money family that Another Period follows.

The last few weeks have seen a few new social media innovations that might make being plugged into watching your favorite sketch group or listening to your favorite podcast while scrolling through your timeline.

Twitter has just introduced an “Audio Card” that will allow you to listen to embedded audio, just via SoundCloud for now, while combing through your favorite tweets or possibly tweeting yourself (perhaps, live tweeting a podcast if you have way too much free time on your hands, perhaps?).

Weeks ago, Yahoo’s Marissa Mayer announced that the Tumblr video player would get an overhaul. Their first version of the new Tumblr video player has arrived and it does indeed work better than previous versions and allows for easy embedding of Instagram and Vine videos. You can also loop the video player, again, if you have way too much free time on your hands. The video player will also pop out to the side of your Dashboard, though we’re guessing you’re not going to do that while watching various comedy videos.

Well, let’s see how much more you’re glued to your smartphone because of these innovations and that’ll be a good gauge of how well these two upgrades to Twitter and Tumblr are.

So, in that time before you watch 20 minutes of trailers, your tweets and vines might just be featured at your local multiplex.

For comedians, this will be a prime opportunity to tell their parents that they made it to the big screen and didn’t even have to audition.

ABC, Fox, and More On Board For Comcast/Twitter “SEEiT” Initiative

ABC, Fox, and More On Board For Comcast/Twitter “SEEiT” Initiative

The newly developed Twitter function that will take people to watching certain TV shows when tweeting about them has gotten more partners like ABC and Fox.

As Nielsen now, somehow, figures tweeting into ratings, SEEiT, if it catches on, might be a way to inflate ratings for a show. Then, maybe tweeting about a show could, in theory, save shows from getting cancelled like Enlightened?

Definitely, @midnight will benefit from this if Comedy Central/Viacom joins in.

TV Everywhere and Comcast are developing a Twitter specific button/app that will allow users access to an embeddable link to whatever show/content they’re tweeting about.

Could this have saved Totally Biased with W. Kamau Bell or Nikki & Sara Live? We will never know, but this is the sort of thing, especially given Nielsen’s new inclusion of Twitter chatter into ratings, that might have helped.

If you’re stuck watching the Emmys/are excited for your Emmys party coming up, you might be able to cope/enhance your experience by following many of the funniest people on Twitter tweeting about the awards ceremony.

This is especially helpful if you want to read a lot of jokes tonight, since Twitter stops loading tweets after about 700 or so in your timeline. Yes, we found that out the hard way.

Check it at the link if you’re into this at 4PM PST tonight.

August 1, 2013
Uncategorized
jack more, modern seinfeld, twitter, us and them

Jack Moore, the guy behind @seinfeldtoday getting a sitcom writing job isn’t an unprecedented phenomenon, though, still something definitely worth noting. Megan Amram, Kelly Oxford, Rob Delaney, Shit My Dad Says, Dadboner, and more names you might recognized from the Twitter-verse have gotten jobs, offers, deals, etc. from writing consistently funny stuff in 140 characters or less (in addition to their much longer form stuff).

In finding out about this story, we do wonder if the show that Moore is writing on was pitched or discussed at some point as a modern day Seinfeld.

Jenny Johnson is one of those rare people that have figured out Twitter comedy-wise on their terms and have built quite the following. As both Megan Amram and Kelly Oxford are writing/have written published books, we’re glad the trend to prove that funny things can be brought out of tweeting and thus rewarded is continuing. 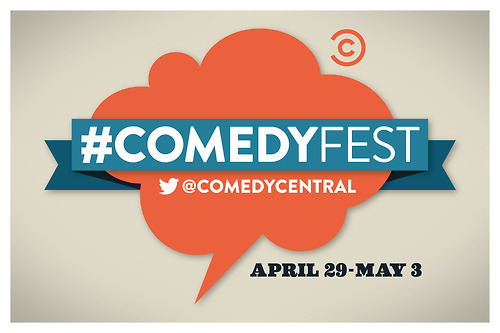 In case you’re one of the stalwarts holding out on Twitter, what we were trying to say with the headline is that Comedy Central is starting their first comedy festival just on Twitter, aptly named #ComedyFest. Next Monday, they’ll have all sorts of shenanigans limited to 140 characters like Mel Brooks joining Twitter, dining with Steve Agee through Vine, live tweeting day time drinking with the comedians of Comedy Central’s Half Hour, a live roasting with Jeff Ross, and much much more.

Sounds fun, huh? Then, get over your digital prejudice and follow @ComedyCentral on Twitter for #ComedyFest next week.

Whether or not you know that famed Twitter account @dadboner is actually written by comedian Mike Burns, you should absolutely watch this great mini-documentary that Vice made about Mike, trying to make it as a comedian in LA/in general, and his coming up with and rise to Internet fame as Karl Welzein.