We were actually wondering what would happen to this sort of segment in stand-up comedy as Netflix is currently in the business of doling out hours for comedy’s biggest stars and then giving who they think are up-and-comers (but are somewhat established, certainly enough for an hour special) 30 min. or 15 min. specials. Our hunch was that Amazon and other streaming services/networks like HBO Max would fill in this niche and it is certainly coming to pass. Amazon’s already put out hours from Alice Wetterlund and I Mom So Hard and, from the looks of this announcement, HBO is getting in while the getting is good.

This week, TBS officially renews the genre-bending Search Party for a third season and pulls the trigger quickly on another season of the Jordan Peele/John Carcieri created, Tracy Morgan starrer, The Last O.G.

We’re doubling up on our ticket giveaways this week as you could win either see another rollicking line-up of Hot Tub with Kurt & Kristen featuring Scott Thompson, Sabrina Jalees, Brooks Wheelan, and more OR Tracy Morgan at the Novo in DTLA next Friday, Apr. 27th. 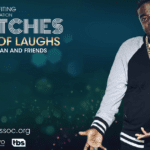 The one and only Tracy Morgan will be doing a special one night only benefit for the Hydrocephalus Association (Hydrocephalus [HI’DRO-SEF’ A -LUS]: an excess accumulation of fluid in the brain that can only be treated with brain surgery with no current cure.) at The Novo at L.A. Live in DTLA later this month.

Joining Morgan for this special charity benefit will be Ardie Fuqua, Tracey Ashley, Ruperto Vanderpool, Marc Theobald. You’ll be backing a great cause and seeing Morgan hot on the heels of his new series The Last O.G.

You can find out more about the Hydrocephalus Association and donate here.

We also happen to have a pair of tickets for you to win. Just enter here:  http://dola.com/events/2018/4/27/in-stitches-an-evening-of-laughs-with-tracy-morgan-and-friends

This premieres marks Tracy Morgan’s return to being a sitcom star following that long break from a near fatal car accident, Jordan Peele’s delving back into comedy as co-creator, TBS’ latest scripted series, and another milestone in Tiffany Haddish’s continuing meteoric rise from 2017.

Your curiosity has got to be peaked at the very least.

The Last O.G. is yet another highly anticipated series up TBS’ sleeve as it not only marks the return of Tracy Morgan to a being TV series star, but it’s a series that’s co-created by Jordan Peele and features Tiffany Haddish as the co-star.

The show’s premise is simple enough with contrasting the Brooklyn of yesteryear to the Brooklyn of 2018 through Morgan’s character of a former prison inmate. Peele, Morgan, and Haddish together should have plenty of fun espousing their sensibilities within this comedic framework. This series could have been a multi-cam, but we are thankful that it’s not as that will open up the series to so much more possibility.

The Last O.G. premieres on Tues. April 3rd on TBS.

Tracy Morgan goes full 70s with his attire in this latest special “Staying Alive” and wears it pretty damn well.

After a near death experience, Morgan seems back to being a tireless goofball, but with a new outlook on life. See for yourself in this teaser.

You can live stream it on Facebook Live at the link above as well as donate to the ACLU here.

This might be a more fun roast than many of the high profile celebrity roasts over the last few years as Snoop isn’t widely annoyed by a bunch of people and plenty of friends will be roasting him.

Fusion, Russell Simmons’ All Def Digital, and Merry Jane are teaming up to put a roast of the one and only Snoop Dogg cleverly called Snoop Dogg Smokeout.

From the press release: The Roast and Birthday Celebration Will be Hosted by Mike Epps and Feature a Lineup of Celebrities and Special Appearances Including T.I., Terry Crews, Martha Stewart, Sanaa Lathan, French Montana, LL Cool J, Seth Rogen, Tracy Morgan and More

The special event is set to be televised this Saturday, December 10th at 10PM. Here’s a fun promo that gets actually gets mogul Simmons in on the fun.

Take a look at that TBS programming line-up again and you just might be surprised (again) with what they’ve done this year.

Originally at FX, Tracy Morgan was set to star in this comedy that would have him star as a man released from prison after serving 15 years, then have to adapt to a Brooklyn that’s much different than he remembers. FX passed on this show from Jordan Peele and Vice Principals co-executive producer and writer, John Carcieri, but TBS made a sure to get a series order before the show landed somewhere else.

Remember when the only thing that you probably watched on TBS was Conan? TBS looks like they’re doing a pretty good job in making sure that doesn’t happen again.

Over the last couple of years, Eddie Murphy has publicly mulled over a return to stand-up, but would always add the caveat of not knowing exactly what he would do since comedy has changed so much since he last took the mic.

Yet, this dead-on impression of Tracy Morgan that he did during his recent appearance of Kimmel might be a good place to start.

It would seem Tracy Morgan has made a full recovery after being involved in terrifying car crash.

On last night’s Tonight Show, Morgan went to his comedic well with claiming to date people that he hasn’t dated and making loud non-sensical proclamations.

That being said, Morgan did have a brief moment of personal vulnerability when talking about how his daughter and wife brought him back from a coma.

This is a pretty great way for Tracy Morgan to make a comeback.

The latest addition to FX’s comedy development slate comes in a pilot that seems tailor made for its star Tracy Morgan. Written by Jordan Peele and Eastbound & Down’s John Carcieri, Morgan will play a recently released convict after over a decade and a half of incarceration that has to adjust to normal society.

If this gets picked up (which, on paper, it sounds like it should), we’ll be curious to see if it falls in line more with FX or FXx.

Good call on Saturday Night Live’s part by having one of comedy’s currently brightest stars and one SNL alum that has made a miraculous recovery after a near fatal accident to host the beginning of SNL’s 41st season.

Kicking off on October, Amy Schumer will host on Oct. 10th, then Tracy Morgan will host the week after on Oct. 17th. The season premiere will be hosted by Miley Cyrus, which should prove for three big weeks for the long running sketch variety show.

FX Supports Tracy Morgan, Says “His Show Will Be Waiting For Him” When He Recovers

FX Supports Tracy Morgan, Says “His Show Will Be Waiting For Him” When He Recovers

Despite Tracy Morgan’s severe injuries and long recovery ahead from a horrific car accident this past weekend, FX will still move ahead with his show set to premiere on FXx when Morgan feels ready he can go back to work.

Tracy is currently in stable condition, but the show’s schedule is probably going to be pushed back a few months, if not several.

On the first week of its return, Totally Biased with W. Kamau Bell appropriately had some pretty amazing segments, a good sign for the new episodes in their new daily format to come.

One of them was Totally Biased writer Janine Brito competing in a Tracy Morgan impression contest against none other than Tracy Morgan. It’s as amazing as it sounds, so go watch it right now here.

2) It’s official, Funny or Die & Earwolf have joined forces today to bring comedy to the online masses on the video and audio fronts. There’s even a “How Podcasts are Made” FoD exclusive to commemorate the event. Unfortunately, according to sources, will not be going by Funny Ear and/or Die Wolf.

Where Do Podcasts Come From? – watch more funny videos

3) In case you haven’t noticed, we’ve done a little housekeeping in updating both our calendars at the top of our main page as well as our comedy venue calendar list. Now, you can have ready knowledge of what’s happening comedy wise throughout the current month in LA as well as ready links to the Comedy Sportz LA Theater, Dangerfield’s 2, and Good Time Comedy Club. Or you could just check the Morning Debriefing everyday… your choice?

4) This new episode of Henry’s Kitchen makes me want Henry Phillips to have a restaurant.

5) Patton Oswalt didn’t go to the Toronto International Film Festival and started a hashtag on Twitter #FakeTIFF2011Films and then hilarity insued.

6) In case you had a pool going, here’s the comedy winners at the Creative Arts Emmys.

7) Jena Friedman, who now writes for Letterman, posted a new episode of her hilarious series Ted & Gracie that everyone should watch.

12) I’m not sure what it means that I saw more people tweet, update their facebook statuses, blog, etc. about the series finale of Entourage than 9/11.

2) If you’re staying in tonight, you will be watching Futurama on Comedy Central 10PM and Louie on FX 10:30PM, then Nick Kroll on Conan 11PM TBS.

3) Best part of Thursday? Taco Eating Contest on the Compatish

6) So Ron Howard is making a live action Spy vs. Spy happen… [via Deadline]

7) If you’ve never been to Tony Sam’s Persona, you need to go. It’s groundbreaking and hilarious, but why have us tell you with words when you can see a video?

8) FYF Fest is giving away tickets!!! (it’s mostly music, but as they’ve advertised at the bottom right hand corner of their flyer, there is stand-up comedy scheduled)

9) For the entirety of next week, the whole Bureau will be up in Portland, OR on “vacation” (interpret that how you will).  Do not worry as we will continue posting and tweeting during our stay, but we won’t be able to circle our Twitter feed like a vulture with nothing better to do to find all the great bits of comedy news and shows, etc. that you’re all probably used to.  If you have a tip for a story, something to be possibly posted here, or a possible mention/plug of a show, e-mail thecomedybureau@gmail.com or tweet us @thecomedybureau.

14) It took five (or ten, not really sure) cups of coffee to get through this post.  You’re all welcome.