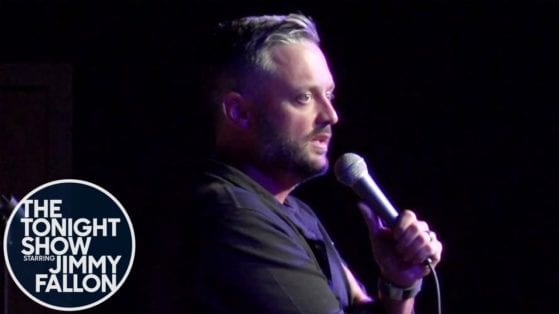 Since lockdown started, late night talk shows have been holding on any which they could to keep going, though they have had to experiment with every facet of their format to do so. Not being able to have guests in studio with them or even being in studio has hindered a lot of what late night used to be, especially when it comes to featuring stand-up comedy.

Stand-up comedy, as it was traditionally done, especially on late night is one of the last things that will get to return to “normal” if that even is in the cards post-pandemic. Still, that doesn’t mean it won’t ever happen again or that it can’t be reimagined or done differently to keep the art form, and its performers that are bound to it, going.

Just this past week, the delightful Nate Bargatze got to perform stand-up on The Tonight Show, the first set in all of late night since March before everything shut down. Bargatze was in another venue altogether and not even anywhere near NYC, back in studio where Fallon was broadcasting from. Bargatze was in Huntsville, Alabama at Stand-Up Live with a limited capacity, socially distanced audience.

Not much is seen of the crowd in the set, but this does seem a far cry from that unfortunate set by D.L. Hughley at Zanies Nashville where he fainted on set. This set up isn’t too dissimilar from how Jimmy Kimmel Live was featuring stand-up by taping sets in Vegas at Kimmel’s comedy club before COVID-19 (maybe he’ll do that again?)

Nate doesn’t miss a step with his signature cool, calm, collected observations about the minutia of life right now, which is more impressive with a deadly virus still holding its grasp firmly on the world’s population. As far as a first late night stand-up set during this pandemic to set a tone, a benchmark, it’s pretty damn good. It underscores the importance of comedy in processing tragedy and horror in not only giving catharsis to folks on collectively shared tension, but connecting us on such common ground at a time that we’ve all been as divided and isolated as we’ve ever been.

“See Jo Firestone” should be an additional definition to the word “delightful” in any and all dictionaries.

Firestone got to return to the Tonight Show stage for her second set in front of Fallon. You can’t help but smile and laugh at as well as really consider the true demographic of women’s clothing company Ann Taylor.

Last Friday, Carmen Lynch showed yet again that she can really craft and deliver a hilarious classic late night set on The Tonight Show Starring Jimmy Fallon. Callbacks, misdirection, and overall great joke structure and delivery are all on display here in addition to the charm of Carmen’s low-key persona and incredibly expressive eyes (used marvelously to comedic effect).

Man oh man, the many voices and asides (literal asides from herself to herself) from Jessica Kirson are such a delight in this set from this late night set on last week’s Tonight Show Starring Jimmy Fallon. It’s the perfect preview for her special Talking to Myself premiering on Comedy Central on Dec. 6th at midnight.

Megan Gailey just released a great album this week, My Dad Paid For This and offered a more fine comedy wares with her set on The Tonight Show from last night.

This set is a pretty great bookend to the album as Megan demands that she be engaged on her album by the time of its release and is now, in fact, engaged. Gailey’s just a few steps ahead always.

In a slick silver suit, on The Tonight Show, and executing a flawless delivery on very well crafted 5 min. set, Ryan Hamilton almost seems a throwback to the Johnny Carson’s days on the Tonight Show.

That being said, the set itself has a certain timeless quality and probably would have killed in the 70s too. See Ryan’s set from last night’s Tonight Show for yourself here.

Julio Torres has been having quite the 2019 with Los Espookys, writing on SNL, and his own stand-up.

Perhaps, his own upcoming comedy special, My Favorite Shapes, set to premiere on HBO this Sat. Aug. 10th at 10:30PM will be the biggest splash for Julio this year as he is doing an entire special where he, as the title suggests, presents his most favorite shapes.

You’ve seen a bit of what he has in store in the My Favorite Shapes trailer, but Julio gave an extended preview of what to expect on last night’s Tonight Show and it was pretty glorious.

In fact, Julio might have just brought the avant garde to prop comedy.

It’s undeniable that Jess Salomon’s smile and energy is infectious (would it surprise you to know that she’s Canadian?). On top of that, she has a wildly fascinating life story (we don’t want to ruin it, but where she came from to comedy and the woman she married could make for a pretty enticing memoir), which makes her debut on The Tonight Show, pretty memorable.

Jo Firestone, always one to eschew from convention, prefaced her set on the last Tonight Show this past week with some “praise” for Mamma Mia 2. Then, she went into her set with her signature charming offbeat style for a great set that makes you want to hear Jo kind of talk about anything and everything.

Behind the sweet face of Jaboukie Young-White is a clever, mischievous (yet, also still sweet) sense of humor. It’s the thing that has carried him to a big following online, TV writing gigs,  and this second set on the Tonight Show from last week.

For us, the closer on this set is stellar.

So, It Looks Like Hannah Gadsby Won’t Be Quitting Comedy

Hannah Gadsby, the voice behind the groundbreaking special Nanette (wherein she shockingly stated that she had to quit comedy), made it pretty clear during her appearance on last night’s Tonight Show that she will not be leaving comedy.

So, we’re not quite sure what, when, where Gadsby’s next work will be, but you can look forward to something from her in the future.

Also, enjoy Hannah setting and maintaining her signature tone/presence during this interview aside the always giddy Jimmy Fallon.

We’ve said it before and we’ll say it again. Mark Normand’s style, writing, cadence, persona, etc. are kind of perfect for the demanding nature of doing stand-up on a late night talk show.

His tight writing, structure, and transitions (and the fact that he dons a suit) calls back to a sort of a classic tight 5 on Carson (this set just happens to be a bit over 5 min. FYI).

In any case, you should enjoy Normand’s set here.

Not only does Nikki Glaser deliver a flawless late night set on last Friday’s Tonight Show, but does so while giving love yet another chance (perhaps, one after a few too many?).

Whatever the case may be, Glaser delivery, timing, writing, etc. are all on point on top of the material being perfectly threaded together.

Nate Bargatze is the perfect combination of a keen comedic observer and a folksy storyteller and this latest set on The Tonight Show is a perfect example of that.

Simply, we love that one, Jacqueline Novak, used the platform that a late night stand-up set on The Tonight Show provides to lay down the law when it comes to sharing fries when going out.

Also, we love the unexpected, but wholly wonderful twirling that happens during this set on last week’s Fallon.

Always balancing a bouncy, spirited energy with a bit of cynicism, Bonnie McFarlane proved once again that she is one of our favorite people to watch do stand-up on late night with her set on The Tonight Show Starring Jimmy Fallon.

If you’re in the NYC, LA, or Chicago comedy scene, you’ve might have caught wind of the name Jaboukie Young-White (especially after this Vulture list).

Well, here’s to more than just hearing his name at various comedy showcases as Jaboukie just landed his first televised stand-up set on The Tonight Show, which aired last night. Seeing him for ourselves, we won’t be surprised to see him making the rounds more regularly on TV next year.

No matter what holiday you’re celebrating/observing this season, Kate Berlant and John Early show us the true meaning of it all in their bit on The Tonight Show.

After the announced shuddering of Seeso, the fate of the Paul Reiser and David Gordon Green-produced series, There’s… Johnny really seemed to hang in the balance.

Fortunately, Hulu stepped in and will be streaming the show on their platform starting Thursday, November 16th.

There’s… Johnny focuses on the behind the scenes happenings at The Tonight Show Starring Johnny Carson and even uses actual Tonight Show footage. If you’ve been on board for I’m Dying Up Here, this will be another look into comedy in the 70s that you might enjoy.

See for yourself with the first full trailer here.

In case you didn’t know, Nate Bargatze is one of the Tonight Show’s absolute favorite comedians.

This set is a yet another example of why Nate keeps getting asked back. Also, this is the first time that we can remember that Nate, or really anyone in recent memory for that matter, has opened up with a story of murder on a family friendly late night talk show. Of course, it being Nate, it went pretty swell.

As we’ve said before, there are a few comics out there that are built to do sets on late night.

Nikki Glaser is one of the comics and, again, showed why on her recent set from The Tonight Show.

She also made one of the most enjoyable impressions we’ve seen of Jennifer Aniston yet.

For decades now, one of the best guests in the whole world of late night is Norm Macdonald.

You can lose a whole afternoon, evening, and more going down a rabbit hole looking up all of his appearances on Conan, Letterman, etc.

This latest appearance on The Tonight Show Starring Jimmy Fallon is just another nice milestone in just this one particular facet of his monumental comedy career.

Watch Joe Zimmerman Do a Tight Set on the Tonight Show and Then, Share One of the More Insane Hell Gig Stories We’ve Heard

Joe Zimmerman is, and has been for years, a delight to watch and proves that with his latest late night set from last week’s Tonight Show.

In addition to this notch on what is sure to be one of many more instances of his stand-up making its way to TV, Joe Zimmerman shared a Dante’s-Inferno-esque hell gig story that has so many layers of absurdity that you almost can’t believe that he stuck it through to find his way to where he is now.

It’s a great example of the ridiculous amount of dedication that comedy demands.

We’re not going to give away too much here, so we’ll just say that NYC’s Josh Johnson had his late night stand-up debut on last night’s Tonight Show and there was a bit of a surprise that was some lovely icing on the cake.

Together, John Early and Kate Berlant are a force to be reckoned with.

Their late night debut from last night’s Fallon is a perfect showcase of just that.