Pick of the Day: The Comedy Store Family Fund Benefit

Within comedy, some of the financially hardest hit groups by the COVID-19 pandemic include comedians making the majority of their money by touring and the venue staff at comedy clubs and venues.

To that point, one of LA’s biggest, oldest, most renown comedy institutions, The Comedy Store, will be holding a special, exclusive benefit for its staff and their paid regulars that have been out of work with the club having to go dark for several weeks. The Comedy Store Family Fund Benefit is set for this Tues. Apr. 21st at 5PM PT/8PM ET and will span 3 hours of many of the biggest names that regularly play the hallowed stages of The Comedy Store including Bill Burr, Tom Segura, and Whitney Cummings.

“It will air live as three separate 1 hour episodes on YouTube, Twitch and www.thecomedystore.com, followed by an “on demand” broadcast through The Comedy Store Channel on Apple TV, Amazon Fire, Roku and Xbox.”

Here’s a promo for The Comedy Store Family Fund for more details.

We cannot wait for Tuesday and #TCSBenefit Three hours of amazing comedians, hilarious podcasts, and showing love to our Comedy Store Family! Tuesdays are our favourite day, even during quarantine ? #thecomedystore #storetuesdays #tcsfamily #paidregular #comedicallyyours #covid19

Tom Segura Set For Two Netflix Comedy Specials, One in English and One in Spanish

Tom Segura Set For Two Netflix Comedy Specials, One in English and One in Spanish

Arguably, doing comedy in another language other than your native tongue could be the highest mark of fluency in that language. Not only do you have to understand speech, grammar, pronunciation, slang, idioms, etc., but you have to be able to play with them in a way that’s particularly obtuse for comedy (oh yeah, you already have to be funny too).

This is happening more and more these days with the likes of Gad Emaleh, Rafi Bastos, Carmen Lynch, and, of course, Eddie Izzard (he’s done some of his hours in at least three different languages if not more)

Tom Segura is indeed already one of the funniest comedians working today and has been bilingual for pretty much his whole life. So, it stands to reason that, in addition to a brand new English language stand-up special, that he would eventually do one in Spanish, which he is currently crafting right at this very moment.

The English special is set for Netflix streaming on Mar. 24th and the Spanish one will come out later this year. We’re so curious as to what that might be, sound like, feel like (though we’re sure Segura’s cutting observational humor will still shine through).

Tom Segura and Christina Pazsitzky, both very funny stand-ups in their own right (go watch the four Netflix specials between the both of them in case you’re not familiar), are now in development for making a sitcom based on their lives married to each other and raising kids.

Fans of their hit podcast Your Mom’s House ought to be especially excited as there is a decent chance you might get to see them together on screen in a scripted series as opposed to just a recording studio.

Also, we’ll be curious to see what they’ll be able to do/get away with over at CBS (or maybe CBS is getting set to be a tad bit more edgy with their sitcoms?).

Arguably, Tom Segura was one of the first comedians to really get catapulted into success (and rightfully so we might add) because of Netflix.

Even though Netflix has been chasing down the biggest names in comedy over the last couple of years, it is nice to see that they’re sticking by Tom as you can see in the trailer for this latest special, Disgraceful.

Look for Disgraceful to start streaming on Netflix on Friday, Jan. 12th. 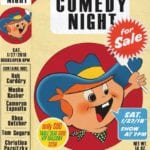 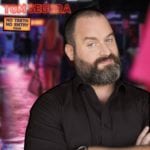 Tom Segura is playing The Wiltern as a stop on his No Teeth No Entry Tour on Saturday, November 25th at 8PM.

You ought to know that Tom is one of the best comedic storytellers around and his observations that accompany that are so damn funny. Tickets are going for $25-$35 and you can (and should) get them here.

Nikki Glaser takes real life, hilarious comedian couple Tom Segura and Christina Pazsitzky and join in on a crash course on how to properly “peg” (the sex act, not what you do with jeans).

This is definitely NSFW if you had any doubts. Also, it’s more fantastic work from Not Safe with Nikki Glaser that you should be watching as soon as you can.

We swear that Tom Segura can make a great story out of almost anything.

Watch him recount a rare sort of an encounter with Mike Tyson from this week’s Conan.

We really like that Netflix chose Tom Segura for their first comedy special release of 2016.

Netflix announced that they’re going global and expanding their content far beyond what they even did last year. So, they’ve got the hysterical Tom Segura and his latest hour special Mostly Stories starting off what’s sure to be another trailblazing, landmark year for Netflix.

Honestly, Tom Segura should get much more accolades for how damn funny he is. We can’t wait for that to happen when his new hour stand-up special Mostly Stories starts streaming this Fri. on Jan. 8th at Netflix.

Get a taste of it with this trailer.

A New Tom Segura Special is Due Out in January

Add this to your list of 2016 releases that you’re excited about.

Tom Segura came out with his last special, Completely Normal, over a year ago on Netflix. According to this tweet from Comedy Dynamics, his next special is due out next month.

Though we don’t know the exact date or even what it’s going to be called, Tom put forth one of our favorite late night sets over the last few years and our ears perk up with any new album, special, set etc. he’s gearing up for.

In addition to the early renewal of Those Who Can’t yesterday, TruTV is continuing to bulk up their brand with the additions of a pilot deal and script from Tom Segura and Melissa Hunter, respectively. Segura is a great stand-up and you probably know Hunter better as Adult Wednesday Addams.

TruTV has Tom developing a medical comedy and Melissa working on a project centered on a “amateur vigilante squad”. There aren’t details beyond that, but we’ll be watching these and the rest of what TruTV has cooking because, from where we’re standing, it smells pretty good so far.

Their portion of this year’s Upfronts consisted of an intriguing slate that includes a series order of Adam Conover’s Adam Ruins Everything, which should bring an air of funny bittersweetness to us all with Adam’s explanation of things we unfortunately take for granted, and a pilot from stand-up comedians and real life husband and wife Tom Segura and Christina Pazsitzky.

Along with Those Who Can’t and gaining Billy On The Street, TruTV’s line-up becomes more enticing everyday.