Over the course of two movies, Adam Sandler, David Spade, Chris Rock, and Kevin James have gotten to effectively hang out and celebrate the good ol’ times together in both a diegetic and non-diegetic sense.

The wily old Tom Scharpling had a bit of fun imagining what a third installment to the film franchise would be like and penned an entire script as a loving stunt to the Grown Ups and the “SandlerVerse”. What resulted is a very satisfyingly meta, twist-and-turn filled short script (only 51 pages).

FYI, tickets for the live reading of Grown-Ups 3 on Jan. 28th at the Bootleg are still available. 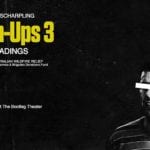 The well of comedy gold that flows from the imagination of Tom Scharpling (The Best Show on WFMU) never ends and never ceases to amaze. Just for the hell of it, he made an irreverent script for what he thought could be the third installment in the Grown-Ups franchise, the Adam Sandler and friends broad comedies that is pretty much just premised on reuniting old friends for some hijinks.

This Grown-Ups 3 will be live read later this month (Tues. Jan. 28th 8:30PM) at the Bootleg by what we’re sure will be a stellar cast in order to raise money in support of Australian Wildfire relief.

Tickets are starting at $15. Go get them for this special, one-off that supports a very, very good cause here.

The Best Show’s Tom Scharpling and Jon Wurster got to sit down and chat with Seth Meyers about the history of The Best Show.

This includes fake and real callers to their show and how Tom will handle them or just hang up.

After this appearance, we’re curious what sort of callers The Best Show will get now and how weird they’ll be.

The Best Show Returns Both Live Tonight And As a Podcast

All you need to know is that The Best Show with Tom Scharpling will make an independent triumphant return tonight live at 6PM PST at TheBestShow.net and then released later as a podcast.

Tom Scharpling and Jon Wurster Present the Newbridge Tourism Board

Enjoy your Saturday morning with a tour of Tom Scharpling and Jon Wurster’s Newbridge from The Best Show as presented by The Newbridge Tourism Board.

Trust us, you won’t want to go anywhere else.

While you’re waiting for The Best Show to return, there’s something to make that wait even more enticing than it already is.

The Best Show’s Tom Scharpling and Jon Wurster are coming out with a 16 CD boxed set “culled from the vaults of WFMU—the world’s most acclaimed free-form radio station—comes over 20 hours of mind-bending, hilarious phone calls between the renowned comedy duo of Tom Scharpling & Jon Wurster”.

There’s also “a 108-page hardcover book with cover art by Joe Matt that features essays by Patton Oswalt, Julie Klausner, Damian Abraham (lead singer of F*cked Up) and Best Show associate producer Michael Lisk (aka A.P. Mike), a definitive interview with Scharpling & Wurster by Jake Fogelnest, notes on the evolution and inspiration behind each bit written by Scharpling & Wurster, a USB drive with all of the calls plus 4 hours of bonus material, a fold-out map of Newbridge, Philly Boy Roy & Timmy von Trimble Paper Dolls, postcards, and temporary tattoos with The Best Show catch-phrases.”

If you pre-order from Numero Group, you’ll get a piece of a smashed phone that Wurster used to make the first Rock, Rot & Rule call along with a certificate of authenticity.

Don’t think this is all real? See Scharpling and Wurster all explain it themselves and smash the phone.

Then, put your pre-order in at Numero Group that ships out March of 2015 because you know you want this and that piece of the phone.

‘The Best Show with Tom Scharpling’ Is Coming Back

If reboots and revivals are the order of the day, why not have something of the likes of The Best Show with Tom Scharpling return into all of our lives?

If you’ve been obsessively asking that question, then you’re answer this morning came in the form that you were hoping as Tom Scharpling tweeted out “Tell your friends. Scream it in the streets. Because THE BEST SHOW IS COMING BACK."

It’s not entirely clear where the return will happen especially since The Goddamn Dave Hill Show has taken and settled quite nicely at The Best Show’s slot. However, Scharpling wants to make sure that everything is coming back just like you remember it.

Tom Scharpling and Real Estate could almost do an entire musical special comprised of music videos.

Here is the latest evidence featuring Andy Daly, vampire skateboarders, and lots of pottery. Lots of it.

The Best Show on WFMU with Tom Scharpling Ends Tonight

The Best Show on WFMU with Tom Scharpling Ends Tonight

At 6PM PST tonignt, the final episode of The Best Show on WFMU with Tom Scharpling will bow and the end of era will pass.

Make sure to tune in/stream here.

Don’t get too sad though as the one and only Dave Hill is going to be filling in this slot soon.

For those, especially you comedy fans, distraught over the impending end of Tom Scharpling’s Best Show on WFMU, worry not. The amazing Dave Hill is going to take over the time slot from Scharpling with his very own show.

Whether it’s a mix of all of Dave’s big bag of talents as a comedian, writer, host, TV personality, and more or just a few of those things, we’re confident it’s going to be pretty great.

1) Once again, congratulations to James Adomian landing a role on an NBC pilot!

3) Not sure where he’s going with this story/novel, but perhaps comedian Steven Wright is purposely playing against type. Follow him @stevenwright and find out.

5) On Monday Mar. 7th, there was the Battle of 1739 (Public House), here’s some video of comedian Sean Green murdering one of the hecklers, if you can only imagine just being there…

8) On cracking jokes about the Tsunami in Japan-RT @joshcomers When tragedy strikes, jokes on Twitter feel like weird tumbleweeds.