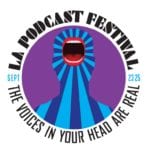 For years now, The LA Podcast Festival has been growing exponentially right along with the medium of podcasting itself.

As you can clearly see with the line-up on the flyer above, not only are there dozens of the biggest podcasts around, but they’re doing pay-per-view this year.

You can and should get your passes, tickets, and accommodations for this year’s LA Podcast Festival, still at The Sofitel in Beverly Hills, ASAP right here.

Last year, Todd Glass got a chance to take make a TV pilot out of his wondrous podcast known as The Todd Glass Show.

Unfortunately, It didn’t get picked up.

We’re not quite sure why as Glass really made his free-wheeling format fly with a plethora of bits and bits within bits and bits about running away from bits, Eddie Pepitone living in a van, sweaty karaoke, James Adomian voicing a more sinister Dr. Phil, and more.

Luckily, we get to see a short version of the pilot thanks to Jake Adams runs the sound effects, a very intergral part of the show, on The Todd Glass Show.

Todd Glass Did Shoot a Pilot for “The Todd Glass Show” This Weekend and, As We Guessed, Todd Did Whatever He Wanted To Do

A source revealed to us some details about the mysterious pilot for The Todd Glass Show.

Here are some key points revealed to us by our source:

-This pilot is an extension of the podcast in that it’s a playground for Todd to do any bit that he wants.
–James Adomian was the show’s guest
–Eddie Pepitone resided in a VW Van parked on the set
–David Spade dropped by to tell everyone that he was “not available to do the show”
-The audience sat in lawn chairs
-There is a house band that does bits with Todd
-The show had a house dog
-The pilot hasn’t been picked up yet, but will be shopped around

So, basically, if you’ve ever seen The Todd Glass Show at LA Podcast Festival or elsewhere, you might get an idea of the delightful craziness that Todd potentially has in store for us.

So, There Was Some Sort of “Todd Glass Show” Pilot Taping Over the Weekend

The nothing but multi-layered fun podcast that is The Todd Glass Show seems like it had a pilot taping with a full set and Eddie Pepitone and James Adomian as guests.

We don’t have any more details about the taping at this time, but given that Todd does basically whatever he wants on his show (and that really runs the gamut of anything that strikes his fancy), we’re guessing that he also did whatever he wanted in this supposed pilot taping, which probably included wonderful bits within bits within bits like Eddie yelling about dancing.

If you just thought listening to the audio of the Todd Glass Show was amazing, just look at the shenanigans that happen in the studio with toupees and dancing and Eddie Pepitone when coupled with video.

Todd Glass and company almost seem like they’re having so much fun that someone is going to tell them to keep it down, but, luckily, it’s Todd and that isn’t going to happen.