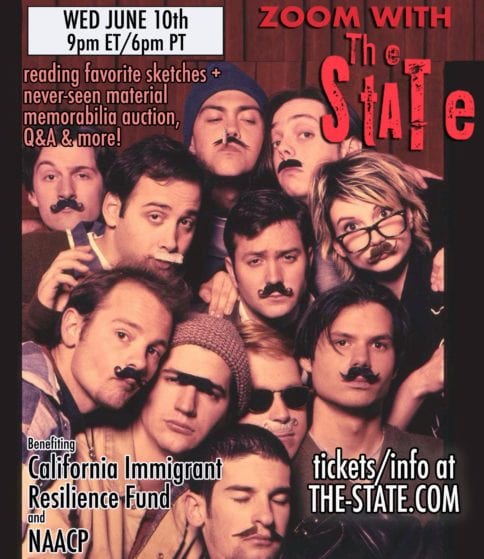 You don’t need to stay up ‘til 3AM to see it because it’s now on YouTube.

“The Union of The State”, An Oral History of the Famed Sketch Group Coming Out in May

January 14, 2016
Uncategorized
oral history, the state, union of the state

This’ll be a must read for comedy fans/lovers/aficionados/nerds/etc.

It’s called The Union of The State and it’s set for release on May 3rd. The release coincides with the group’s reunion after 25 years since their inception.

Whether you’re aware of it or not, Comedy Central is on a roll. Drunk History, Nathan For You, Broad City, “@midnight”, Kroll Show, seem to all be solid in so many respects and thus, it shouldn’t be a surprise that their 1900s scripted comedy Another Period starring Riki Lindhome and Natasha Leggero has just added a stellar supporting/guest cast.

The State Reunited on “@midnight”

Though only Michael Showalter, Kerri Kenney, and Michael Ian Black were playing on “@midnight with Chris Hardwick” last night, The State indeed did come together, even if they were only slightly aware of it.

Legendary sketch group, The State, is re releasing their book State by State with The State: An Uninformed, Poorly Researched Guide to Traveling the United States

as an e-book Nov. 5th, which is on pre-order right now. You can still buy a physical copy, which begs the question about why is it a big deal about releasing as a e-book?

Well, making this promo with all the members of The State is a good enough reason as far as we’re concerned.