Even after years of being off the air, the American version of The Office still endures as millions of people’s favorite comedy that they will rewatch again and again.

So, the idea that The Office stars Angela Kinsey and Jenna Fischer would want to recap the series and share insider details seems like a home run. Indeed, Office Ladies, their recently launched podcast on Earwolf, does just that. They’ve just dropped their first episode recapping the pilot and, from listening to it, it’s clear that if you love The Office at all, you’ll very easily want to subscribe and so many already have. The love that Kinsey and Fischer have for the show (and for each other) makes for a sort of warm, nostalgic, quilted blanket that features so many details that you might have not noticed until they told you about it.

So, get into Office Ladies here or wherever you listen to your favorite podcasts.

Beginning on Oct. 16th, Fischer and Kinsey will co-host a podcast that will revisit The Office, the very sitcom that brought them into the hearts and minds of the world.

Available via Earwolf, Office Ladies will have Jenna and Angela go episode by episode, an already proven podcast format, giving insight to their experiences on one of the most beloved sitcoms this side of the millennium.

Essentially, it’ll be a premium version of DVD commentary of The Office.

Season 2 of the U.S. version of The Office saw Pam Beesly get 86′d from all Chili’s worldwide for drinking other people’s cocktails after she had been cut off during “The Dundies” that Michael Scott was holding for his Dunder Mifflin Scranton employees.

All these years later, well after the series finale, Jenna Fischer posted a pic outside of a Chili’s pondering whether should she go in. In the zeitgeist of opposing bans, Chili’s responded and issued a real press release that nixes the ban on Pam Beesly Halpert from any Chili’s establishments.

It may only be a ban on a fictional character from a series that ended awhile ago that has been lifted, but we’ll take any good news that we can get right now.

Finland to Get Local Version of ‘The Office’

Finland to Get Local Version of ‘The Office’

If you’re keeping score, this will be the 9th version of The Office joining the original from the UK, the U.S. version, and versions from France, Quebec, Chile, Israel, Germany, and Sweden.

As far as British comedy being translated to territories around the globe that’s a pretty singular feat. Eddie Izzard has not even learned to do stand-up in that many languages yet. 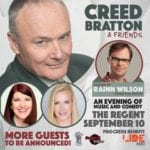 America! You can watch #LifeOnTheRoad exclusively on @Netflix next year. Or you can fly to The UK to watch in movie theatres this August 🙂

The movie spin-off of the British version of The Office that follows David Brent’s forced music career will come across the pond via Netflix exclusively. In the ongoing and growing streaming service rivalries, this is a pretty big get for Netflix

There isn’t a set release date yet, but Netflix will have plenty of stuff between now and then to binge watch.

Before his name was tied with ruffling the feathers of some celebrities at The Golden Globes, Ricky Gervais made a name for himself in America with the name David Brent off of the UK version of The Office.

The rock mockumentary following David Brent’s leap into music (that has been in the works over the last couple of years) not only has a release date of Aug. 19th, but there will be an album and live tour as well for Life on the Road.

You can get in on the experiment here.

Comedy specials from Rory Scovel and Matt Besser, Kids in the Hall, SNL, Garth Marenghi’s Dark Place, Before the Morning After, A Bit of Fry & Laurie, 30 Rock, The Office, The World of Alan Partridge, Funny as Hell, Brazil, Fletch, Monty Python (series and films), The UCB Show, and oh so much more are now available at the convenience of some keystrokes, some clicking, and $3.99 a month now that Seeso, NBC’s exclusive comedy streaming service has officially launched.

In case you weren’t already enticed, you can sign-up for Seeso here.

NBC is really going out there in trying an exclusively comedy subscription service in Seeso. Fortunately, they’re letting us all have a trial run come Dec. 3rd where we can stream Seeso for free for the rest of December.

What does that mean exactly? You’ll be able to stream their new shows including Harmonquest, Hidden America with Jonah Ray, live stand-up, and The UCB Show as well as archives of Monty Python’s Flying Circus, The Office (including the British version), 30 Rock SNL, and so much more.

Don’t take our word for it. Let Seeso show you itself.

NBC’s New Comedy Subscription Service, Seeso, Might Just Be The Shot in the Arm That NBC Comedy Needed

Starting in January, NBC will be officially launching Seeso, which will not only offer ad free access to all seasons of The Office, Parks and Recreation, Kids in the Hall, Monty Python’s Flying Circus, The Mighty Boosh, SNL, and more, but also feature boat loads of new content and shows exclusive to Seeso.

It would almost seem that the whole of all of this represents the comedy that has been missing from NBC’s line-up for awhile.

They’ll also be bringing a curated collection of movies and series into the Seeso fold as well.

Sound good? Good. Well, make sure you start saving $3.99 a month after Christmas then.

NBC isn’t kidding around with comedy this pilot season.

Powerless is the latest comedy pilot ordered by NBC from Ben Queen that will follow the lives of the insurance company employees set in the DC Comics universe. Undoubtedly, an insurance company would fittingly have an ungodly workload in a world full of superheroes and supervillains.

Being referenced as The Office with a DC Comics backdrop, would their be an actually sinister Dwight?

Greg Daniels Is Developing a Sci-Fi Rom Com at HBO

Jim and Pam in space?

Greg Daniels, the man behind the U.S. version of The Office, is on to his latest project which seems like it will center on the same sort of day-to-day and romantic tensions that Daniels has beautifully orchestrated in the past, but will now be set up in the sci-fi genre over at HBO.

There is no word on talent being attached or more details on the premise, but perhaps, if this gets picked up we’ll all have something to follow up Other Space with.

NBC must be taking cues from how well comedy does online with the dedicated fan bases of The Office, Parks and Recreation, and Community as they’re now developing a subscription online service targeted for comedy. It’s not clear how this service will work specifically, but if it’s more like HBO GO, then that’s probably a step in the right direction.

NBC is saying episodes of The Tonight Show and Saturday Night Live will be available, we’re more curious about the fates of the aforementioned Office, Parks and Rec, etc. and whether they will be taken off of Hulu and Netflix to live exclusively at this NBC streaming service.

Also, more content will be developed for this service, which, we hope means that they will be putting more backing behind certain pilots like Adam Scott and Joe Mande’s dispensary comedy.

Over several years, Rainn Wilson made a name for himself as well as the character he played on the U.S. version of The Office, Dwight Schrute.

Wilson gets into the nitty gritty about playing Dwight as well as jumping almost immediately into what might be a character of Dwight’s dreams, Backstrom with Speakeasy with Paul F. Tompkins.