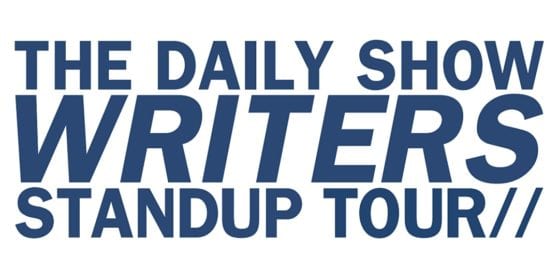 Pick of the Day: The Daily Show Writers Standup Tour 8/12

From the get go of lockdown, The Daily Show with Trevor Noah has been on the ball with doing their show remotely and very quickly figuring out how to translate their format to work in such a fashion. Undoubtedly, the writers of The Daily Show have a lot to do with that.

Thus, an entire show featuring stand-up from said Daily Show writers would be worth catching. Lucky for you, they are doing such a show next month as part of a virtual edition of The Daily Show Writers Standup Tour. Via live-stream, the critically acclaimed writing team of Kat Radley, Randall Otis, Devin Delliquanti, and Joseph Opio will be performing an exclusive night of stand-up comedy (presented by Nowhere Comedy Club).

This Daily Show Writers Standup Tour is set for Wed. Aug. 12th at 6PM PT/9PM ET and tickets are only $10. Go get them here before they sell out.

Trevor Noah to Host The Daily Show Through 2022

Trevor Noah to Host The Daily Show Through 2022

Many late night hosts have their future secured up until 2020 and Comedy Central is more than doubling down on their current Daily Show host, Trevor Noah, who did win a Creative Arts Emmy.

No one else in late night is currently renewed that far in the future (Fallon is re-upped to 2021), which will see Trevor far past the next presidential election. It’s hard to say how exactly it’ll look, but we have no doubt that late night will have gone through many more changes by the time 2022 rolls around. Suffice it to say that Comedy Central has a whole lot of faith in Noah.

“We were the destroyers of men and creators of empires. I think that generally is satire’s role and has always been: the rise and fall of civilization at our whim,” Stewart said facetiously, jokingly adding, “I would have probably allowed Hillary to come a little closer in the Rust Belt, but I still think I would have given Michigan to Trump. I had a little something going on where I was going to give [Al] Gore Florida. There was a bit we had planned that was going to hand Florida to Gore.”

But in all seriousness, Stewart says he doesn’t think satire has that much influence, something he hopes the book [The Daily Show (The Book) An Oral History as Told by Jon Stewart, the Correspondents, Staff and Guests] illustrates.

At a NY Times discussion on the recently released Daily Show oral history, Jon Stewart tried to inject some reality and hope in talking about Trump’s win. Stewart heartily believes that this isn’t the end of America and that it is still the same country with the same people as it was before the election.

Along those lines, Stewart explains, as seen above, that the idea of him staying on as host of The Daily Show wouldn’t have changed the outcome despite some people’s finger-pointing saying otherwise.

Jon also went on to precisely dissect the media coverage, which was always a central focus of his run at The Daily Show, of the election and their obsession with the ratings grabbing headlines and failing to focusing on the actual policy issues.

All of this should inform Jon Stewart’s upcoming animated cable news parody on HBO, which will be more relevant than ever when it premieres.

In case you need an immediate palate cleanser, just wait an hour (give or take a few or more extra hours depending on what side of the country you live on).

In order to get the very first jokes on TV about the first 2016 presidential debate, three late night programs will be going live after the debates.

For the East Coast, these will actually be live as opposed to West Coast delay, so if you have access to an the EST feed of CBS, Comedy Central and NBC, try and watch it at 8PM PDT.

Also, keep in mind that Full Frontal with Samantha Bee is airing on Wednesday this week in order to fully soak in the debate for their episode. #CUNW

There ought to be one hell of a memorable montage of Ms. Williams’ fine work while at The Daily Show.

This Thursday’s episode of The Daily Show with Trevor Noah will be her last as she will be on to writing, producing, and starring in her very own pilot at Comedy Central afterwards. As with so many stellar correspondents before her, it was only a matter of time before bigger opportunities (i.e. potentially her own show) were going to come along.

The pilot, as she describes, is “…about somebody in their 20s who has all these social ideas, but still does not have it together. [Pauses] And she’s, like, goofy and silly and funny!”

While still just a pilot, we have a hard time imagining Comedy Central not moving forward with it in order to keep as much talent from The Daily Show on their network as possible.

The two week trip should be a nice reset button for Noah and company.

The chaos that’s bound to happen should provide for a fortnight of highlight worthy Daily Show.

You can actually get tickets to both the DNC and RNC tapings now.

Neal Brennan Breaks Down Hillary’s Appeal to the Black Vote, Depression, and His “3 Mics” Show

From last night’s The Daily Show, here’s what is probably one of Neal Brennan’s most earnest interviews.

Though he is only mic’d with one mic, it’s a pretty good display of the range he has on his much talked about Three Mics show.

The former host of The Daily Show, Jon Stewart, did indeed make a return to said Daily Show last night. He wasn’t filling in for Trevor, as his t-shirt and jeans might suggest, or there to promote some book or movie he was working on. Stewart only sought the platform to make sure that the Zadroga Bill, which ensures proper health care for 9/11 first responders, will be renewed.

As longtime fans of The Daily Show know, Stewart is at his most affecting when he’s fired up about the issue and he did so in the two segments he got last night.

David Rees Shows Trevor Noah How to Pet a Dog

David Rees gave Trevor Noah, The Daily Show, and, really, all of us a taste of how great Going Deep with David Rees is by demonstrating to Trevor how exactly to pet a dog.

As well as being entertained by Rees’ paper mache dog, we’re guessing that you’ll learn something as well.

Rejoice as this means John Oliver and Jon Stewart are going to be on the same network again.

So, HBO has snatched up Jon Stewart to produced web videos for HBO platforms and then get his movie and TV projects on their desk first. This should allow the flexibility that Stewart couldn’t get at The Daily Show as well as the rest of us getting more of the Jon Stewart that we probably already miss too much.

Jon Stewart is now a couple months out of being the host of The Daily Show and has found a great new balance in home life and writing.

CBS This Morning was chatting with his wife, Tracey Stewart, and ended up shooting the breeze with a very relaxed Jon leaning on the fence outlining their farm.

Watch how Stewart’s adjusted quite nicely after all those years of being a cultural focal point here.

The era of The Daily Show with Trevor Noah is just now settling in as Trevor has gotten a few shows under his belt and the new correspondents are making themselves known.

Hailing from Australia, Ronny Chieng furthers, along with Trevor, The Daily Show’s great inclusion of comedians from outside of our borders.

It’s back to work for The Daily Show as no shortage of nonsensical BS has taken place and/or been reported poorly in the media in the hiatus between Jon Stewart leaving and Trevor Noah taking over last night.

Noah took a nice moment to express his gratitude for this gig, thanking Jon, and then, quickly went back to business. It looks as though Trevor should grow in just fine behind The Daily Show desk.

At the stroke of 11PM, it’ll be hard to miss the new Daily Show.

The restart of one of Comedy Central’s pillars, The Daily Show, comes tonight as the show’s third host, Trevor Noah sits behind the desk that millions watch Jon Stewart night in and night out for well over a decade.

As this is such a momentous occasion, Viacom, which owns Comedy Central, is going to have the premiere air across all their networks including MTV and VH1.

While that’s certainly going to boost their ratings, there will undoubtedly be a whole bunch of folks that watch the episode online afterwards.

Still, if you’re looking to watch the premiere live, tune into Comedy Central at 11PM for the inaugural episode of The Daily Show with Trevor Noah.