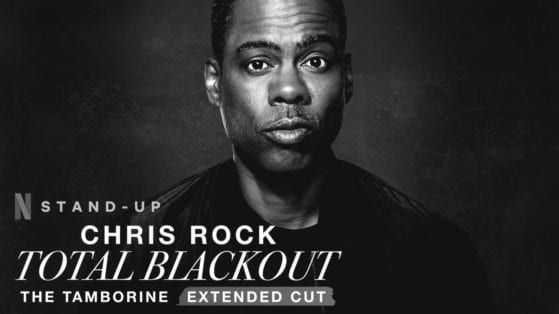 Netflix to Release Extended/Remixed Version of Chris Rock’s Tamborine (Because Maybe They Don’t Have Very Many New Specials on Deck?)

Next Tuesday, we’ll get a new Netflix stand-up special.

Well, we will kind of get a new one.

Announced today, Chris Rock’s great 2018 special Tamborine will be getting a special extended cut to be released on Netflix. It’ll be called TOTAL BLACKOUT: The Tamborine Extended Cut and it’ll indeed feature jokes that were cut from the original special. For that alone, we are indeed looking forward to it (though it’s release is a curious case).

In fact, Rock himself describes it as a first-of-its-kind remixed special. That somewhat begs the question as to why Netflix and Rock are doing an extended version of a special from over two years ago. Tamborine was pretty well received (we loved it and kudos to Bo Burnham giving it a cinematic flair), but we suspect a “remixed” release is one of many tactics that streaming services and networks will be employing to keep producing content while having production on new specials/shows cancelled/paused/etc.

Also, as the pandemic rages on, the pace at which Netflix has been releasing comedy specials has ticked down very noticeably. At one point, you could almost count on two new comedy specials a week to drop on Netflix versus Natalie Palamides: NATE and London Hughes: To Catch a D*ck being the two that we remember coming out last month. Netflix did chop up their specials and churned out “Best of Stand Up 2020”, but there’s nothing new in there.

So, we can all look forward to TOTAL BLACKOUT: The Tamborine Extended Cut on Jan. 12th on Netflix and you can potentially look to more reimagining by Netflix and others on how they’ll keeping their place in stand-up comedy secure.

TOTAL BLACK OUT: The Tamborine Extended Cut is coming to Netflix on January 12th. @NetflixIsAJoke pic.twitter.com/QKsYtKCAZD

Finally, we have gotten a special from a comedy legend (that hasn’t done a comedy special in a very long time) that can live up to the hype.

Tamborine both satisfies the long-held, unsatisfied craving that you’ve probably had for a new hour of stand-up from Chris Rock and offers a more mature, vulnerable, introspective Rock. For instance, he not only hushes the crowd immediately to get to a joke about police brutality and racial inequality without any sort of greeting, but Rock opens up about his divorce and raising his kids in a way that you might have not imagined Chris Rock would ever do. In short, Rock doesn’t disappoint at a time when heroes of all kinds have been disappointing right and left.

Also, one should take note that Rock tapped Bo Burnham (who has directed two of his own specials and Jerrod Carmichael’s 8) to direct his latest special and the result looks subtly slick and very personal (i.e. this special has some of the most extreme close-ups ever used in a comedy special).

When the next awards season comes around, it’d be surprising to not see Rock’s new hour be heavily favorited wherever it can be nominated.

Chris Rock: Tamborine is now streaming on Netflix. So, go watch it (or watch it again) already.

We’re going to go ahead and say that no one came close to guessing that Chris Rock’s first stand-up special in several years was what behind Netflix’s mysterious tamborine announcement a few days ago.

In any case, Chris Rock: Tamborine will drop at midnight on Netflix and, we guess, be Rock’s Valentine’s gift to us all?