Under the Guy Branum’s watch, late night will always be kept on its toes.

This Thursday, Feb. 1st, Talk Show the Game Show will return to TruTV at 10:30PM and you’ll get the pleasure of watching such things as Charles Barkley attempting to hurl meatballs into the mouth of a giant Shaq face.

See for yourself here and make sure to watch Branum and company put celebrities through the late night talk show gauntlet tomorrow night.

See a bit of what Guy and company have in store in this promo and look forward to Talk Show the Game Show’s return on Thursday, February 1st on TruTV. 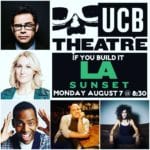 Monday nights have a new weekly stand-up show for you to catch in LA.

If You Build It with Kara Klenk will be happening every Monday starting August 7th at UCB Sunset and they’re kicking it off with one hell of a line-up including Dana Gould, Nikki Glaser, Baron Vaughn, Guy Branum, and Marcella Arguello.

Tickets are $7 and you can (and really should) get them here.

One of SF’s big festivals, Outside Lands, returns for its 2017 edition on Friday, August 11th-Sunday, August 13th.

As you can see above, they have a pretty swell line-up for their Barbary Comedy Tent.

On top of that, music acts will include, but certainly not limited to, headliners such as The Who, Gorillaz, Lorde, Tribe Called Quest, and Queens of the Stone Age.

You can get tickets/passes here.

Talk Show the Game Show is bringing talk show games to a whole other level as evidenced by these clips of Maria Bamford having to use her voice talents to bring pictures of realtors to life and James Adomian going head-to-head with Guy Branum in an arm wrestling match (with a spectacular finish we might add).

Also, unlike the majority of other talk show and late night games, the points and winners do matter and have a whole set of judges that keep them accountable to being the most entertaining guest throughout the evening. Again, we hope this revolutionizes playing games with celebrities on television going forward.

By the way, there’s a new episode of Talk Show the Game Show with Guy Branum tonight on TruTV at 10PM.

We highly recommend you watch it and see talk show guests be whipped into shape when every single detail of their appearances gets judged on a thorough point system. Hopefully, you’ll want all talk show appearances to be conducted like this after watching it.

The talk show, nay, the televised interview might just get revolutionized as being a dull guest does not cut it at Guy Branum’s Talk Show the Game Show.

We’ve loved Guy’s show for years and we can now really show how the competitive talk show works and why we’re thrilled it’s getting a shot on television.

See for yourself with this preview and look for the series premiere on TruTV next week on Wednesday, April 5th at 10PM.

Guy Branum’s competitive talk show, Talk Show the Game Show, is going to be a full-fledged TV series on TruTV next month.

For the uninitiated, Guy created a brilliant show format where guests have to compete to be the most interesting talk show guest, complete with a panel of judges. It’s been one of our favorite things to see in LA for years.

Going from live show to TV show, Talk Show the Game Show is now being kicked into high gear with more exciting bells and whistles as shown in this trailer.

The first season will have the following folks go head-to-head in trying to edge out each other in being more interesting, witty, fun, etc.:

Guy Branum’s Talk Show the Game Show has its series premiere on Wednesday, April 5th at 10PM on TruTV.

Many of you don’t even know the greatness that’s about to come with Guy Branum’s Talk Show the Game Show being made into a TV show, but, hopefully, you’ll know soon enough thanks to TruTV.

Today, via press release, TruTV announced its upcoming slate of programming and development that happened to have plenty of things that have us excited for the network in 2017.

With a Trump Administration looming, Adam Conover and his ‘bigly’ tendency to ruin things will be very nice to have for a sixteen episode second season of Adam Ruins Everything.

Guy Branum’s Talk Show the Game Show is a competitive talk show where guests have to compete to be the best, most interesting guest dealing with the sharp wit of host Guy Branum. It’s a gem here in LA that we’ve enjoyed for years and we can’t wait for the rest of the country to see what happens when guests can just rely on the story of their weird ride to the airport to get through a late night segment.

Sketch duo Austin Martinez got to incubate on Rachel Dratch’s Late Night Snack on TruTV and will now get upgraded to developing a series of their own. An animated family marijuana dispensary comedy from Martin Starr and Matt Bush is also in development.

In addition to that upcoming Bobcat Goldthwait anthology series, TruTV could have a pretty great 2017. 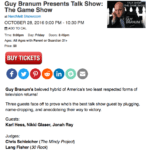