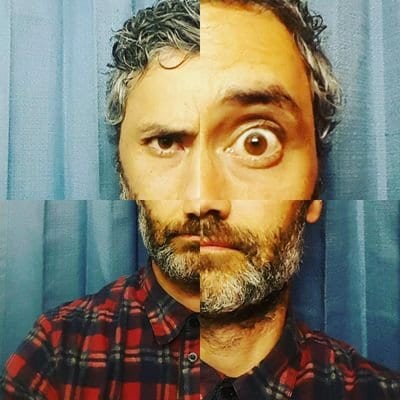 Taika Waititi to Direct and Co-Write a Star Wars Movie

This news almost seems inevitable as Taika Waititi has not only proven his worth in the billion dollar tentpole franchise realm with Thor: Ragnarok (on top of being a beloved indie comedy writer/director), but has also done right by the Star Wars universe with voicing a droid and being the season finale director of The Mandalorian.

So, Waititi will indeed putting his particular golden touch (that always seems to include his beloved off-beat sense of humor) with an entire Star Wars feature film by directing and co-writing with Krysty Wilson-Cairns (1917). It has yet to be even slightly detailed as to what Taika might be tackling in the Star Wars canon, but we do hope that, whatever it would end up being, that it would be the comedic jewel that Thor: Ragnarok is to the Marvel Cinematic Universe.

Maybe he’d take a stab at redoing/reviving/rebooting the Star Wars Holiday Special? We have full faith that he’d be able to do something truly magical with that. 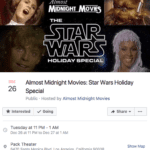 Honestly, all things considered, there probably has never been a better time to watch the infamous Star Wars Holiday Special than this 2017 holiday season.

So, catch it in an actual theater, The Pack Theater, with other folks the day after Christmas (kind of neat, belated Christmas present, right?).

On This Star Wars Day, Check Out What’s Happening Elsewhere a Galaxy Far, Far Away with “Outer Rim”

May 4, 2017
Uncategorized
fan film, may the fourth be with you, outer rim, parody, star wars, star wars day, thomas wood

The galaxy in which Star Wars takes place always seem to be at war with some sort of Empire-Rebellion dynamic.

Writer/director Thomas Wood and Dave Ross and Steve Hernandez gives us one of those stories just in time for Star Wars Day with Outer Rim. 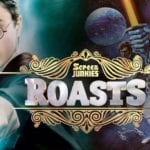 Screen Junkies are doing a taping of two more of their roasts that are for Screen Junkies Plus. One will be for Harry Potter and the other will be for Star Wars and it’ll take place on Thursday, October 27th in Los Angeles.

If you’d like to go, get more details and free tickets here.

It’s trips to Comic Con that brings out bits like this on Conan and we’re glad that we’re getting more of it.

Conan associate producer Jordan Schlansky nerds out on a pristine, life size replica of Darth Vader’s helmet and Conan O’Brien, as you can imagine, has a few, or a lot, of things to say to say about that.

Just think of Patton’s appearance on Conan from last night as three new tracks from an upcoming special or album.

1. Death comes with donuts
2. Falling off the wagon again for Star Wars
3. The My Little Pony expanded universe

Just like a Patton bit from an album or special, they’re worth repeat watches and listens.

The great Sam Simmons is setting the new standard for caroling at Christmas by walking in the middle of a busy London street at night and probably making something that some die hard Star Wars fans didn’t even think of.

Conan Has an Ewok Infestation in His Studio

Of all the Star Wars themed bits in late night over the last few weeks, this one on this week’s Conan is probably one of our favorites.

While Star Wars: The Force Awakens is poised to break every box office record known to man this weekend, it is still legal, as Amy Poehler and Tina Fey have been saying, to see both Sisters and Star Wars in the same weekend.

To hit that point home, the entire cast of Sisters including Ike Barinholtz, Rachel Dratch, and Maya Rudolph on top of Tina and Amy as well as writer Paula Pell went on Late Night with Seth Meyers and voiced various Star Wars action figures to say why you should go see Sisters.

Indeed, they do make a great case for seeing both.

Conan’s Jordan Schlansky Meets Harrison Ford and It Doesn’t Quite Go as Planned… or Does It?

Conan’s famous associate producer Jordan Schlansky has many obsessions that have been cataloged and systematically ridiculed by Conan O’Brien over the years. Aside from wine, coffee, water, and Italy, Jordan is a huge Star Wars fan.

As Conan had a Star Wars themed episode last night, they let Jordan geek out over meeting Harrison Ford and Star Wars: The Force Awakens director J.J. Abrams as well as get a pretty great bit out if.

In 2015, these aren’t just your kids’ Star Wars action figures and the ads for such merchandise should reflect that.

SNL did a pretty great job hitting all the target demos for Star Wars toys for this day and age.

On Dec. 18th, both Star Wars: The Force Awakens and the latest Tina Fey and Amy Poehler offering, Sisters, roll out into theaters nationwide. Fey and Poehler are obviously worried that an original film might not have the draw of the return of Star Wars, so they made this Star Wars-tinged featurette that encourages you to watch at least two movies that weekend before Christmas.

Actually, so many of the opening day tickets, over $50 million worth of them, for Star Wars have been sold out already. So, odds are that you probably have little conflict on what you want to see on the weekend of Dec. 18th.

Whether or not you’re caught up with the return of Star Wars or the late night juggernaut that is The Tonight Show Starring Jimmy Fallon, Harrison Ford’s stop by Fallon’s desk last night was pretty great. It was a call back of how fun a late night interview, on any late night talk show, should be.

Though not as spry as the Han Solo from the original Star Wars, Ford still has the same attitude that made him perfect for the role that clashed well with Fallon’s desire to not draw the ire of Harrison.

If you’ve been further wondering what Baron Vaughn as Tom Servo and Hampton Yount as Crow T. Robot might sound like when in action for the new Mystery Science Theater 3000, look no further than their “leaked auditions” for Star Wars: The Force Awakens on Funny or Die.

As we suspected, they look like they’re going to do just fine.

As of right now, there is still no female hosts in late night.

Come February 2016, that will all change once again when Samantha Bee takes up the mantle and push forward from where Chelsea Handler was at E!

So far, she’s off to a good start with this Star Wars-themed, complete with the voice of Darth Vader, promo.

With how big the return of Star Wars is going to be, Screen Junkies does their second Honest Teaser in their Honest Trailers series ever for Star Wars: Episode VII The Force Awakens.

We don’t know how they do it, but Screen Junkies tap into the collective unconscious and really voice what we’re mostly all thinking when watching the various Star Wars teasers and trailers.

The latest stand-up performance on Conan comes from Jerry Rocha who defies your expectations as someone who is Mexican, but kind of doesn’t look the stereotypical part.

The Star Wars Force Awakens trailer has got pretty much all of us excited about a galaxy far, far away again, especially since there are all these brand new developments.

MTV Other’s Door Boys from Good Cop Great Cop have a lot of time on their hands, so, it would be reasonable to assume that they would get the order of movies in The Star Wars franchise mixed up.

It’s not confusing to the rest of us that IV is first and I is fourth, right? Even if it is, just watch the latest episode of Door Boys here.

Tina Fey on Handling Her Youngest Daughter, Her Nude Celebrity Photos, and Her and Amy Poehler’s Movie vs. Star Wars

Last night on The Late Show with David Letterman, Tina Fey sat down and chatted with Dave about the havoc that her youngest daughter is currently wreaking. Fey also discussed a fool proof plan for nude photos in the event that they were stolen from her and leaked to the Internet.

On top of all of that, she found out that the movie that her and Amy Poehler are starring in, The Nest, might be going up against Star Wars Episode VII in theaters next Christmas.

Needless to say, Fey isn’t worried about it all about handling her crazed daughter, taking down Star Wars on opening weekend and outsmarting celebrity photo thieves.

We posted a clip from Wits with John Moe earlier today and, if you liked that, you’ll probably like his book of letters “written” by pop culture’s biggest figures from one to the other, Dear Luke, We Need To Talk. Darth. As the title suggests, there are letters like Darth Vader writing a letter to Luke Skywalker about something important that he wants to tell him.

So, it’s like all those books of war letters, but made perfectly for the pop culture obsessed 21st century and that’s why we think you should give it a read.

There Will Be a Phineas and Ferb Star Wars Special

There Will Be a Phineas and Ferb Star Wars Special

One of The Disney Channel’s most entertaining shows might just be Phineas and Ferb, which may be why they’re getting a big special episode that’s a crossover with The Star Wars universe.

Leading up to the release of Episode VII, there is sure to be more Star Wars themed everything, but, for now, we’re glad to see that on July 26th, when this premieres, there will be another Star Wars cartoon special in addition to the ones from Family Guy and Robot Chicken.

In a preview clip of this latest season of Comedy Bang! Bang!, coming May 8th on IFC, Patton Oswalt and Scott Aukerman have some exciting news about the news Star Wars movie. In fact, it’s both news to them.

Last month, a video of Patton Oswalt completely improvising a filibuster on what the Star Wars sequel should be during shooting of an episode of Parks and Recreation was posted on YouTube. As Oswalt has admitted himself that “this was bound to happen”, an animated version of his amazing filibuster/pitch is now online with animation by Isaac Moores.

It’s pretty amazing and you should watch it now.