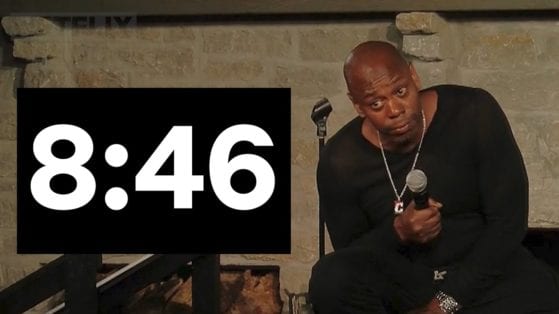 The moment we’re living in is one of extended, acute trauma. It’s everything happening all at the same time, bearing down on the entire globe.

So, what is comedy’s purpose in this time, especially when it has been already redefining itself as an art form under the COVID-19 pandemic? It’s a question that we have been pondering for weeks, especially since having the energy to attempt to be funny seems to be on short supply.

Cue Dave Chappelle and his nearly half-hour special 8:46 that was recorded only last week (outside with a socially distanced crowd in face masks) and released last night. Chappelle has never shied away from talking about crucial issues in his stand-up, sometimes in a controversial way, but he has gotten lengthier in his analysis of them in these years, especially when he released his first special after leaving Chappelle’s Show.

8:46, of course, denotes the amount of time that Derek Chauvin had his knee on George Floyd’s neck murdering him in broad daylight with three other officers standing passively by him. That is the entire focus of the Chappelle’s set, which Dave notes is material that he’s working out. It is as raw as Chappelle has ever gotten and often it’s not necessarily hysterical, but that is sort of the point. The tension is clear and we’re all meant to sit in it as we have been to feel it together within a space that is normally reserved for well-crafted bits, jokes, and social satire met with laughter and applause.

However, it’s illuminating in a way that comedic thinking can often highlight contradictions. In 8:46, Dave makes a brilliant connection between the saga of Christopher Dorner and George Floyd and the global outcry for justice. Ironically, Chappelle even confesses that he shouldn’t even be the one speaking out as the streets are doing a much better job of that. Dave utilizes the platform of 8:46 as a “comedy special” to juxtapose, as comedy so expertly does, disparate things that, actually, may be not be so disparate for a salient point. For now, that’s definitely something comedy can do in this historical moment.

For a couple of years now, W. Kamau Bell has been primarily focused on his critically acclaimed CNN series United Shades of America. Just in case you forgot, Bell is a very fun stand-up to watch even though he’s a very overtly political comedian (having a warm, inviting demeanor might be a good place to start when doing effective political comedy these days).

His new hour Private School Negro is a great reminder how jubilant and jovial Kamau can be while delving into potentially divisive material and still make it all work. Even though he spends several minutes on a bit focused on Trump undeniably being a racist (and his supporters who say you can’t really call him a racist), it’s done up in such a playful way that those exhausted on Trump humor might still enjoy it.

Another way that Kamau deals with talking about politics and race so well in this special is that he brings humanity to it, specifically in sharing stories about raising his daughters who are biracial. It’s both sweet and offers perspective in what is, often times, mostly an ideological fight.

All in all, Kamau has made a political comedy special that is very much of the time, but, thankfully, has some legitimate hope in it.

In Hannah Gadsby’s Hour “Nanette”, Gadsby Reveals and Undoes the Seams of Comedy to Properly Tell Her Story of Sexual Assault

Much of 2018 is left, but we’re already thinking that Aussie comedian Hannah Gadsby and her new special Nanette, now streaming on Netflix as of this week, will be talked about for quite some time.

There are so many facets to it that, we think, demand such attention.

The contrast between the two angles lends to Gadsby also sharing her personal philosophy on how comedy exactly works, down to the very DNA of it. From this almost critical dissection of comedy, Gadbsy goes on to suggest that she might have to step away from comedy as she wants to present the truth, warts and all, no matter how uncomfortable it may be.

With this mix, Nanette is an hour that really is dramedy more than it is a simply labeled stand-up comedy special. There are funny, charming bits and passages that are incredibly intense and effective, both of which Hannah manages to weave in her expertise in art history as well.

So, we highly urge you to go see all this for yourself in Gadsby’s Nanette on Netflix.

Too much has gone on in the world during Samantha Bee’s hiatus, so thank goodness there is this special episode of Full Frontal coming this Wednesday at 10:30PM on TBS.

While you’re still waiting for Batman v. Superman: Dawn of Justice, something to watch in the DC Comics Universe will be the third Robot Chicken DC Comics special, premiering tonight.

With the New York Comic Con on hand, they’re continuing to tease the special as there is a great, brand new trailer.

Fortunately, this time around, we only have to wait a week until the premiere.

Finally, Conan O’Brien’s Remote Segments Are Getting Their Own Primetime Special

Almost a year ago, we wrote a piece about how Conan O’Brien’s remote segments throughout his tenure as a late night host are some of the funniest things to be done on TV and there should be an entire show dedicated to just that. That includes Conan visiting places around the world, dealing with Jordan Schlansky, Clueless Gamer, and more.

Well, it just so turns out that we spoke something into the ether (along with millions of other people most likely) and TBS will air an entire primetime special on Thurs. Dec. 18th at 10PM of the best of these remotes.

We don’t believe in the power of attraction necessarily, but this special happening doesn’t help our case.

DC Pierson Has Put Up His One Man Storytelling Show, DC Pierson Is Bad at Girls, Online for Free

In addition to the 30 min. of stand-up the very funny DC Pierson did live at Echoes Under Sunset, he also recorded his DC Pierson Is Bad at Girls show that very night. Suffice it to say that it was one hell of an evening.

Luckily, you can enjoy DC’s one man storytelling show for free too right here.

Well, mark your calendars for CK’s latest special as well as the inevitable and highly anticipated appearances on the late night circuit.

By then, maybe HBO will let you subscribe to HBOGO only?

1) Once again, congratulations to James Adomian landing a role on an NBC pilot!

3) Not sure where he’s going with this story/novel, but perhaps comedian Steven Wright is purposely playing against type. Follow him @stevenwright and find out.

5) On Monday Mar. 7th, there was the Battle of 1739 (Public House), here’s some video of comedian Sean Green murdering one of the hecklers, if you can only imagine just being there…

8) On cracking jokes about the Tsunami in Japan-RT @joshcomers When tragedy strikes, jokes on Twitter feel like weird tumbleweeds.

1) The Comedy Central Promo by Jay Larson for Jay Larson’s Half Hour Special this Fri. at 11:30PM… or is it?

2) Well, this doesn’t happen too often anymore, but it’s happening tonight… Patton Oswalt for free on the Comedy Palace at the Palace Restaurant.  Doors are at 8:30PM. Show starts at 9PM and I’m pretty sure it’s going to be packed to standing room only.  Or you can see him for the nominal fee of $25 at the Galaxy Theatre in Santa Ana at 8PM tomorrow.

3) [How to get rid of] Stains! by Megan Amram. Eat your heart out Billy Mays! [via Vice Magazine]

4) Garfunkel and Oates on Attack of the Show!!!

7) I found out that comedy is in fact more nerdy than video games as I had a girl intently interested in playing video games then blow me off once I brought up comedy to talk to a gay friend of mine.  Comedy is that nerdy.