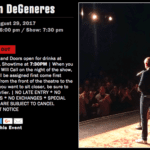 Within minutes of being announced, this Ellen DeGeneres show at Largo at the Coronet Theatre happening this Tuesday night is already sold out.

However, we’d urge you to keep a close watch on Largo’s calendar, maybe even sign-up for their mailing list as they just might release tickets at the last minute between today and tomorrow or, also, add another night from Ellen.

The rest of our listings for comedy shows, events, open mics, and more can be found at www.thecomedybureau.com. 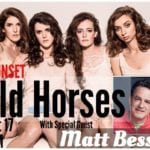 Wild Horses (that’s Erin Whitehead, Mary Holland, Stephanie Allynne, and Lauren Lapkus) are absolutely one of the best improv teams around. So, any chance you get see them “prance” is one you should take.

Their show on Thursday at UCB Sunset has been sold out for sometime and just happens to feature Matt Besser, one of the UCB 4, as the special guest.

If you still want to go, you might just be in luck as we’ve got tickets that you can win.

1) Date Rape Audience Monologist’s (from DCM ASSSSCAT) identity is revealed. Also, he left Facebook like that’s going to do something.

4) Did you know Jim Jefferies & Eddie Ifft had a podcast? Now you do.

5) Damn, we love The Midnight Show. Here’s their sketch about home invasion.

6) So the Internet convened yesterday and decided Joe Mande wrote the funniest thing (that just happened to be about Gilbert Arenas).  We agree.

7) Read how Jeff MacKinnon is having all the fun in Edinburgh at the Fringe Festival in his 12th and 13th parts of coverage for Laughspin.

8) Splitsider makes a solid list of podcasts that should exist. We could go on about adding more, but our first thought was that Joe Wengert should have a podcast called “Before Therapy”.

9) Mainstream comedy success? More like… I have no fucking idea what a large cross section of America wants in their comedy.

13) Because I couldn’t get up at an open mic on a college campus, I felt like Banksy in Exit Through the Gift Shop when he regrets encouraging everyone to be an artist.