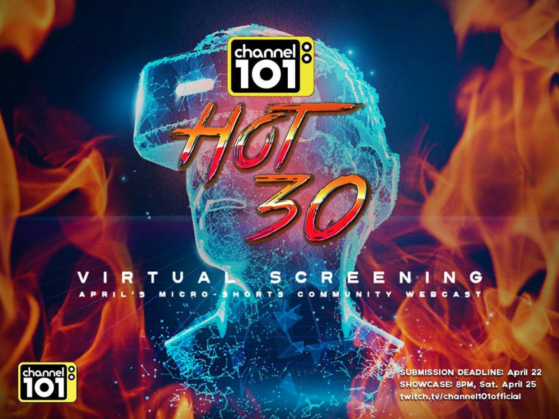 Channel 101 stands as kind of a local legend here in LA, the birthplace of such wonderfully weird cultural juggernauts as Rick & Morty. It is, and has been for several years, a competitive short form TV competition that has cultivated such an innovative and tightly knit community that makes some of the best, genre-bending, fiercely independent series that have ever been made.

Certainly, this is one of those things in LA that we’d very much like to keep around/going. As movie theaters are still very much closed right now, namely their home theater The Downtown Independent in DTLA, they can’t really go about business as usual.

So, instead of sourcing 5 minute pilots and shows that have been renewed from the previous month by vote, they’re doing a condensed version of Channel 101 that is look for 30 second shows to feature virtually for their Channel 101: Hot 30 Virtual Screening.

When it comes to awards for film, short films almost get overlooked despite having their own category in several major film festivals and awards ceremonies. No matter how acclaimed a short film is, it will likely never get to see the light of a movie projector onto a screen in your local theater.

Sundance is changing that by touring short films across the country and now plans, for this fall, to tour a curated selection of animated short films from coast to coast here in the U.S. Also, it almost goes without saying that animated shorts is one of a handful of categories where comedy gets a little recognition amidst primarily heavy dramatic fare.

So, hopefully, this becomes a trend and keeps going and some great animated comedic shorts (as well as live action ones) that would usually find a home online will make it to a theater screen near you.

We’d put money on the hilarious Andre Hyland interviewing himself as a character in promotion of his short film Funnel screening at The Sundance  Film Festival better than most interviews at Sundance.

Unfortunately, I don’t think there are any bookies that would take a bet like that.

Did You Know That There Was a Whole YouTube Channel For Disney Short Films?

Did You Know That There Was a Whole YouTube Channel For Disney Short Films?

It includes shorts from Pixar, some Schoolhouse Rock, and some lesser known works that you should check out. Perhaps, this’ll be a nice, sweet thing to follow 4/20 with?