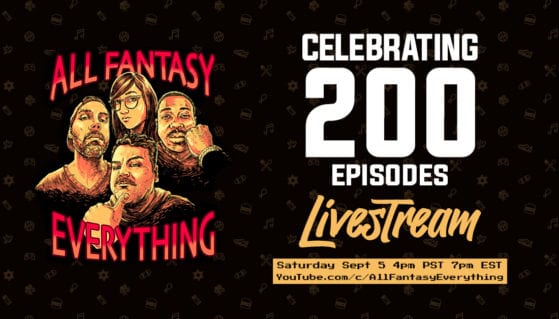 Pick of the Day: All Fantasy Everything Celebrating 200 Episodes Livestream 9/5

Positivity is so hard to come by these days, but you can rest assured that the All Fantasy Everything podcast is predicated on host Ian Karmel along with Sean Jordan, David Gborie, and a plethora of recurring and special guests fantasy drafting the things that they love.

On the verge of 200 episodes, The Good Vibes Gang is going to do something special via a live-stream celebration (we’re betting that they would have done a big live show if there weren’t a pandemic). Join in loving the podcast that’s about loving the very specific things that people love (with a little bit of fun bickering) this coming weekend on Sat. Sept. 5th at 4PM PT/7PM ET on YouTube right here.

Just letting everyone know that our 200th episode will be live streamed on Saturday! Celebrate with us! Help us put something positive out into the world right now 🙂 pic.twitter.com/yqHCxyOj9T 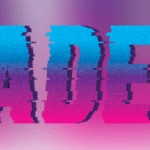 Faded, one of LA’s favorite indie stand-up shows, especially on Fridays, is back for 2020 with a whole new location. They started in the supply room of an art supplies story, then moved to a belly dancing studio, and now, are moving to their most “conventional” venue thus far, the speakeasy-ish The Lounge on Melrose (7551 Melrose Ave.).

So, join Mike Mulloy, David Gborie, Sean Jordan, Bri Pruett, and Zak Toscani and their always stacked secret line-ups for a nice price of $5 in advance (limited quantities available) and their normal cost of $10.

All Fantasy Everything’s Going on Tour

It would seem that more and more folks are coming to hear the beauty in the comedy fantasy-draft-of-anything podcast All Fantasy Everything like we have.

As such, Ian Karmel along with David Gborie and Sean Jordan AKA The Good Vibes Gang are embarking a nationwide Summer Breeze ‘19 Tour that will take them all across country.

That’ll include:
June 26 – Seattle – The Showbox

Tickets are on sale now and you best get them quick because we’re pretty sure that they’ll sell out quick.

It’s a hard feat within the realm of comedy to be both positive and being funny at the same time. The crux of so many jokes comes rely on a critical, yet pithy and/or clever angle of the world by the comedian/writer/humorist/etc.

Still, that doesn’t mean that being funny about something that’s good can’t be done. That’s where the podcast All Fantasy Everything comes in.

Wonderful comedian and writer Ian Karmel hosts a fantasy draft like you would for football, but, as the title suggests, for everything else. That includes: Taco Bell menu, moments in songs that give you chills, what you would do with a billion dollars, what fictional character you’d date, movie soundtracks and treating yourself just to name a few. The draft itself has a bit of drama kind of like an actual Fantasy Football draft, but nothing too heavy as the podcast is a round-robin of what and why one loves what they love in a certain category.

Karmel is often joined by David Gborie and Sean Jordan along with great guests who really swing for the fences with their pick. They’re 72 episodes in, and, just this past weekend, did a live episode at SXSW, which should give you plenty of reason to binge All Fantasy Everything. Do so here.

From what we saw, Denver has a good thing going in its comedy scene.

As you might imagine, we don’t get out of LA often or, really at all since there is so much to cover around the scene.

However, last month, we found our way to Denver, Colorado for the 3rd Annual High Plains Comedy Festival and we sure didn’t regret taking a week to explore the ins and outs of comedy in Denver. The Grawlix, which created the upcoming truTV series Those Who Can’t, rose to their current station from Denver and following in their stead is a great bunch of comics operating in what seems to be a well-balanced eco-system of comedy.

With the bureau’s budget, we could only send one person to Denver, so here’s the highlights of what they were physically able to catch at High Plains as well as bit of the local scene on the eve of the festival:

-Everything we’ve heard about Comedy Works in Downtown Denver being one of the best comedy clubs in the entire country, which comes from so many respected people that we and everyone know, is absolutely true. The set up of low ceilings and no tables and stadium seating eliminated any possible distraction from the person on stage. We got to see Ron Funches warm up for his album taping and it was electric.

–The Fine Gentlemen’s Club has established as another solid, rising grouping of stand-ups in Denver. Chris Charpentier, Sam Tallent, Bobby Crane, and Nathan Lund made quite the showing at their own weekly show at The Deer Pile as well as their High Plains show at Three Kings Tavern.

-The storytelling showcase The Narrators, created by The Grawlix’s own Andrew Orvedahl, ran the gamut of emotions from hysterical to sobering to hysterical again. They just branched out to San Diego FYI.

-The three primary venues for High Plains were The Hi-Dive, 3 Kings Tavern, and Mutiny Information Cafe, which were all about two blocks from each other. That’s always a big plus at any comedy festival.

–Sean Patton got to headline several shows throughout the festival, which is a real treat to see his rich and deeply colorful comedy for both fans and first timers alike.

-Hometown heroes The Grawlix (Adam Cayton-Holland, Andrew Orvedahl, and Ben Roy) got a rousing, rollicking homecoming when they headlined at 3 Kings. At one point, Roy lead almost half the crowd, pied piper like, up on stage and through the green room just for the hell of it.

-Recent LA transplants via Denver, Kristin Rand and Haley Driscoll put on a display of how spirited and charming they are several times at High Plains as well as at a few shows we caught before the festival.

–Mara Wiles and The Funky Brunch was one of our favorite shows at High Plains. It pitted stand-ups to do sets that had to finish with a funk/soul-inspired obstacle/restriction like literally being tied up with rope as a silky smooth love song is playing.

-One of the after parties featured German rock “group” Total Ghost where The Nix Brothers, highly regarded directing duo from Denver, pretending to play their instruments during a crazy multimedia light extravaganza. It was a pretty solid way to kick off an after party of a comedy festival.

–Ian Abramson’s 7 Minutes in Purgatory made yet another great festival appearance that took its concept of isolating performers from the audience with sound proof headphones and made them perform on the street with a whole other random crowd watching. The sheer number of levels of which of which you could enjoy the show on were pretty great.

-High Plains’ marquee show The Paramount Theater was a real sight to see with a near 2000 people in attendance to see Anthony Jeselnik headline. As Anthony himself noted, it was nice to see that he didn’t get too high like some folks have gotten at past years of High Plains.

-Denver’s own Aaron Urist was also on that big show at The Paramount and killed with his dark observational humor.

-On a live recording of Kevin O’Brien and Taylor Gonda’s These Things Matter podcast, we really enjoyed Jay Larson not having seen a good majority of the favorite movies and TV of the hosts and guests Ron Funches, Jonah Ray, and Karen Kilgariff, which each guest has to defend why it’s their favorite.

-Hailing from Portland, Wisconsin, and NYC respectively, Sean Jordan, Sammy Arechar, and Noah Gardenswartz gave Denver a great taste of their comedy brand with Sean and Sammy on the more silly side of the comedy spectrum and Noah on the sharper, precise side.

–Guy Branum proved why he’s an exquisite comedy force over the course of several shows on the festival as well as why he deserves to be on way more stages doing comedy than the many he is doing currently.

-The edgy competitive Madlibs adjacent game of Uncalled Four, birthed and grown in Denver, showed why it could become a game show for those looking for something a little darker/more blue/more fun than Steve Harvey’s reactions to answers on Family Feud.

-The absurdists Ron Lynch and Andrés du Bouchet had a ball at High Plains, making people double over while probably redefining their entire perception of the art form of comedy.

-Recently formed comedy music duo Drennon Davis and Karen Kilgariff have been making a case to rethink you possible prejudices against musical comedy so you can enjoy some of the funniest and best crafted songs, often made up almost entirely from Drennon’s loop pedal, to come along in the last several years. Their performances at the festival furthered that notion.

-We have to give a big hand to Andy Juett for being at the helm of High Plains as well as Sexpot Comedy, which he co-founded, being a big driving force behind the festival and making something that should become an institution in Denver comedy if it already isn’t one.