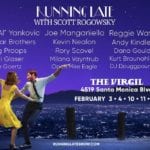 For five nights, he has the likes of Weird Al Yankovic, Reggie Watts, Greg Proops, Rory Scovel, Andy Kindler, Dana Gould, Open Mike Eagle, and so much more all as guests.

You might have seen NYC based Jo Firestone on Vulture’s recent 50 Comedians You Should Know in 2015 and that might have something to do with how she has let her imagination run amok and birth so many different, innovative, weird, and wonderful comedy shows like Punderdome 3000 or The NYC Inner Beauty Pageant.

NYC live late night talk show Running Late with Scott Rogowsky invited Firestone as a guest last month and went into detail about all of her crazy shows along with how she thinks they compare to a traditional format show like Running Late.

Despite what Jo self-deprecatingly said, they all sound pretty great including like the pun competition of Punderdome 3000 or Friends of Single People where friends of singles basically play The Dating Game for them.

She even introduced a new show/game with Bird, Murderer, or Birderer.

We’re not sure if anyone is keeping count, but Jo might have a world record for most comedy shows going at the same time and we hope that you can catch as many as you can soon.

Scott Rogowsky Uses His Own Talk Show To Interview Roommates

Scott Rogowsky has been hosting his own live late night talk show Running Late for years, but made history recently by using said talk show to find a roommate.

He made a listing for an open house, then notified people that there would be cameras documenting them for a “project on NYC housing”. He didn’t explain any further and had potential roommates walk into a talk show set in a living room complete with guests Gilbert Gottfried, Andrew WK, and music band leader The Gregory Bros.

He made a whole web series as a result of this experiment that you can watch right here.