If You’re Obsessing Over Rick and Morty’s “Pickle Rick”, Here’s a Whole “Ricking Morty” and a Behind The Scenes Featurette

If you haven’t, stream it (while you can) at Adult Swim here and be stunned at what might end up being one of the show’s most daring and ambitious episodes ever.

Then, watch the episode’s writer Jessica Gao, Kumail Nanjiani, and Brandon Johnson talk it out with Sam Jay on the latest Ricking Morty.

On top of that, here’s an inside look that went into what designing “Pickle Rick”, the rats, and more.

Hopefully, that’ll satiate you for now.

By the way, has anyone made a connection that “Pickle Rick” is literally about getting out of a pickle (other than the woman who points that out at the end of this Ricking Morty)? 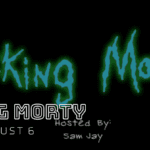 First off, take note of a few things to take away from the headline on the Rick and Morty after-show, Ricking Morty.

Rick and Morty is the first animated series and the first comedy series (outside of some late night bits and some sketches from sketch comedy shows) to get a legitimate (i.e. put on by the network) “after show” a la Walking Dead, Breaking Bad, Mr. Robot, Game of Thrones, etc.

Though not as serialized as all the other dramas we just name-checked, every episode of Rick and Morty has so much to unpack and analyze underneath the brightly colored, uber-clever, hilarious exterior, which makes room for plenty of discussion in an after show.

We can only hope that this is a recurring thing and not just a special one-off for the premiere only, especially since it’s billed as the Official Rick and Morty After-Show.

Also, you’ll note that the host is the very funny Sam Jay (and not Chris Hardwick or any other famous TV personality). We’re glad to see that whoever made the call gave Jay a shot that is well deserved.

Watch Ricking Morty here (after you watch the premiere of season 3 here).