This special will actually have Bret McKenzie and Jemaine Clement perform live in front of a big crowd in the UK that will air in May.

Details beyond that are sparse, but we can only hope that Kristen Schaal and Rhys Darby make some cameos as well. 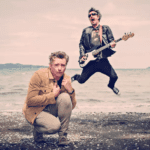 Fusion Has Two Whole Episodes of “No, You Shut Up!” on YouTube

So far, you can watch the two first episodes of this latest season of No, You Shut Up! with Paul F. Tompkins on YouTube.

We’re not sure if the whole season will be put on YouTube after it airs on Fusion, but, in either case, you should watch and guffaw at as much No, You Shut Up! as you can. Maybe then, it’ll go from second most Googled show in 2014 to first in 2015.

So, Billy Eichner and Rhys Darby Will Be Guest Starring in Season 2 of The Millers

CBS’ The Millers just got a lot more enticing with the addition of guest starring roles for Billy Eichner and Rhys Darby in their upcoming season. Eichner is set to play an ex-husband that has a crush on Will Arnett’s Nathan and Rhys Darby will play a sort of a fantasy novel series author/a George R.R. Martin type, perhaps.

So do be on the look out for that when it comes back Oct. 30th.

The amazing Rhys Darby is getting his own show on Netflix set for a release next month, specifically Apr. 3rd.

Short Poppies should be a good thing to queue up next in your binge watching list.

We’re thrilled at the facts that Rhys Darby got to do The Late Show with David Letterman for the first time this past Friday and did so without the seemingly mandatory suit and tie for comedians.

Whether you think wearing a suit might have an effect on the set or not, Rhys was great and you should watch his debut Letterman set now.

Rhys Darby who we hope you know from Flight of The Conchords just started a brand new web series at Nerdist’s YouTube Channel delving into the paranoia of the approaching post-apocalyptic dystopia inevitably creeping towards the present, but, of course, done with a goofy Rhys twist.

Really, the show should be called Reasons to Laugh Hard at Rhys Darby’s Reasons to Be Scared of the Future. Watch the first episode here.