1) Paul Scheer’s NTSF:SD:SUV was interviewed by AOL TV and there’s a preview available on iTunes!!! Don’t miss the premiere this Thurs. at 12:15AM!

2) Funny or Die and/or Earwolf-FOD and Earwolf join in partnership!

4) The Comic’s Comic pointed out yet another random joke stealing accusation today. Hey people excited to be whistleblowers only for the sake of being a whistleblower, realize that there are plenty of incredibly creative and imaginative people not just in comedy, but the entirety of the entertainment industry, and that the possibility of someone coming up with very similar to what someone else came up with is very likely.  In fact, it happens every single day.

If I had a nickel for every time I nearly had an aneurism when I read a log line for movie that just sold that’s basically what I’ve spend the better part of a year writing or hearing a similar joke that’s on an extremely esoteric topic to one that I have by a much more famous comedian than me, well, I would never ever work again.  There’s a reason several intellectual property cases get thrown out every year because they are baseless and more often than not, the accusers care less about what they’re creating and more about the end result of trying to get rich quick.

Our advice: Think very carefully before you throw around the label of a “joke thief” around because it’s very hard to get rid of even if has no foundation in fact.

6) Kurt Braunohler’s World Wide of Animals: Seahorses.  The funniest show about animal facts that did absolutely no fact checking whatsoever.

10) Don’t know what photobombing is? Here’s an almost too perfect example from Ken Jeong in GQ (or from model Kate Upton depending on how you look at it)

11) Lighten up people, dark comedy is STILL comedy-a piece we wrote for Laughspin.com

12) Jesse Miller has a new client!!! (it’s his brother, Troy Miller, and he’s hard as hell with a Bo Staff)

17) Was asked if I was human last night because of constantly overloading my plate with work by somehow finishing it?  To be honest, I had a moment of doubt of whether I was indeed human or not.  Even at this moment, there is a twinge of uncertainty only dismissed by the fact that it’s almost 1PM when I posting the Morning Debriefing.

1) In Portland, OR now for a week, technically on vacation. Just hope you all appreciate that we still haven’t missed a single day of posting since we started.

2) Watch out for this: @marcmaron Okay, I guess the cats out of the bag. There is a feature on me and the show in the new @EW. Dunno if its out on newsstands.

3) You can still submit something to RE:COM for a few more days. Get in by June 30th.  Don’t miss an opportunity to 1) to be a force/voice for comedy 2) see your name in print (that’s right it’s a print magazine).

4) Congratulations to Barbara Gray and her fantastic show One Two Punch getting written up in the LA Times.  Follow @BabsGray on Twitter to keep up to date when the next One Two Punch is as well as damn hilarious tweets.

5) Comedy Bang Bang has a blog about their podcast?!? Alternative comedy gone ever more self-reflexive…

6) Speaking of self-reflexive, this video by “comedy artist” by Charlotte Young was posted by the Daily What several days ago, but  who hasn’t thought they were bullshitting whatever they were saying at least once while on stage? Only the other week, I could have swore that I said on stage, “I have material that works, I swear."

10) Got a brand new off-brand moleskine notebook yesterday.  Let’s hope there are less pages of scribbling "Fuck” over whatever was already written this time around. 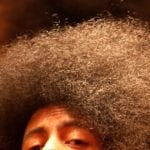 Sneak peek pic, Issue #3! Excited to send this one off all-damn-ready.

Watch out for the next issue of RE:COM! WATCH!!!