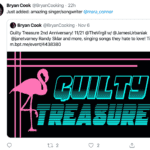 Andy Wood and Bryan Cook’s night of celebrating the best of the worst songs as chosen by very esteemed guests and has been one of our favorite shows to catch since its creation.

So, please join them to mark their Two Year Anniversary over at The Virgil later this month Thurs., Nov. 21st at 8PM with very special guests Janet Varney, Randy Sklar, and James Urbaniak.

Tickets are only $10 right now and you can (and should) get them here.

There’s no question that comedy, especially stand-up, is going through a boom right now. So much innovative, trailblazing funny content, whether it be podcasts, videos, albums, etc. is being thrown in and out everyday at such a blistering pace, it can be hard to know where to start if you’re not already a comedy nerd or aficionado. The Sklar Brothers’ latest album “Hendersons & Daughters” is both a wonderful starting point for those not so well-versed in the burgeoning comedy world as well as those who are zealous followers of it.

First off, both Randy and Jason Sklar are simply fun to listen to. Their almost indistinguishable voices,  comedic timing, and rhythm get jokes off quick and have punchlines, of which there are several, hit hard. As fast as any single one-liner comic, the Sklar Brothers explore their premises so extensively in order to wring out every last bit of funny to make for a comedic style that’s completely Sklar. Coupled with that are their hilarious, free-flowing, act outs (with farcical non-sequitur asides), which are so extensive and throughly funny, they could be full length sketches.

On Hendersons & Daughters, Randy & Jason offer up more than several examples of their comedic prowess that begs for repeated listens. Though they’re twins, as a testament to their dedication to setting themselves apart comedically (though not from each other), they have only two jokes referring to them being twins. That may not be impressive to the casual comedy fan, but any other twin comedy duo would absolutely resort that to being their whole act, not to mention to probably follow comedic duo model of the Smothers Brothers, which they dutifully manage to stay away from.

The Sklar Brothers on Conan

Another interesting feat on Hendersons is the Sklars’ original angle on topics that have been almost overdone in comedy and how they’ve made it organically funny. There are bits about Scharzeneggar, fairy tales, and even the comedy community’s favorite band to hate, Creed. Yet, Randy and Jason really dig for their sincere observations on said topics to not only come up with hysterical, original material, but also form the story of adapting to a life balancing being husbands with kids as well as their identity as the Sklar Brothers. Gleaning from their own life then comedically dissecting it as the Sklars so expertly do, they very well may have the best take on nursery rhymes in the last several years.

Though one can get lost in the constant barrage of comedy, The Sklar Brothers’ “Hendersons & Daughters” is an exemplary record for the craft of stand-up comedy and something that you should go buy or download right now. Limited edition, signed copies available at Earwolf.