The mind that brought you Wrong, Wrong Cops, and Deerskin is back with what looks to be another bonkers absurdist journey (that’s somewhat grounded in a certain type of reality). Quentin Dupieux has always been one to really wreak some fun havoc on the “deep end”, so to speak. So much of his filmography we’ve enjoyed for how brilliantly daft and wildly imaginative it is.

His latest piece, Mandibles, a French language comedy, follows two men who discover they have a giant fly in in the trunk of their car. While startling, everyone seems pretty cool about it and are wondering how to be chill about having the one of a kind giant fly (noticeably not like Jeff Goldblum as a fly) around or even what to do with it. We’re pretty certain that this trailer only scratches the surface on how magnificently weird Mandibles will get.

Mandibles just played the Venice Film Festival this past weekend. We’ll keep you in the loop if and when you’ll be able to see it/stream stateside.

When it comes to the realm of the truly absurd and wonderfully demented comedies in film, Quentin Dupieux is one of our favorites leading the charge with pretty much everything he does. His previous work including Wrong and Wrong Cops are so hysterically bonkers and yet, so stylized that we’ll never forget how much we were enraptured and tilting our head back from laughing so hard.

Dupieux’s latest Deerskin features two of France’s most revered actors in Jean Dujardin (The Artist) and Adele Haenel (Portrait of a Lady on Fire) embarking on a movie where a man gets kind of possessed by this super stylish jacket and driven to do some truly wild and bizarre things. The stature of the cast juxtaposed with Deerskin’s premise really has us on board to see it as soon as we can.

See for yourself in the Deerskin trailer here, then look for it to start hitting theaters on Mar. 20th.

Wrong from Quentin Dupieux is one of the most bonkers, hysterical, absurdist comedies that we’ve ever seen. To try to even sum up the insane, hilarious head trip the film takes you through would be a disservice. Just watch it knowing we busted up throughout.

So, only hearing that Jean Dujardin (Oscar winning star of The Artist) stars in Dupieux’s latest as a man whose life is changed by a “100% deerskin jacket” is enough for us to get on board with whatever’s being cooked up here.

We’ll get our chance soon as Deerskin just got picked up for U.S. distribution by Greenwich Entertainment in 2020 after a few more screenings on the festival circuit.

While certainly out there in the far reaches of the bizarre, we couldn’t help but double over in laughter all throughout Quentin Dupieux‘s Wrong and Wrong Cops.

So, naturally, we’re excited for his next film Reality, which has just been acquired by IFC Midnight, like Wrong Cops, for release.

Eric Wareheim, John Heder, Alain Chabat, Elodie Bouchez, “a mysterious VHS”, an “imaginary skin disease”, and more that are in “Reality” seems to be the ingredients for another mind-bending fun romp from Dupieux.

Watch a clip of it and see what we’re talking about here.

Quentin Dupieux’s “Wrong Cops” Is Out Next Week

One of our absolute favorite movies from last year was Quentin Dupieux’s absurdist delight Wrong. In how purely silly and non-sensical it is, Dupieux, for our money, brought substance out of unfiltered fun.

His follow up to Wrong, Wrong Cops is right along the same track in it’s dedication to a brilliantly ludicrous sensibility with the likes of Arden Myrin, Eric Wareheim, Steve Little, Marilyn Manson, and one hell of a performance from Mark Burnham as an asshole cop obsessed with cutting edge European techno.

Watch the trailer here and then make sure to go see it at Cinefamily or The Downtown Independent here in LA next week or at a location near you soon. 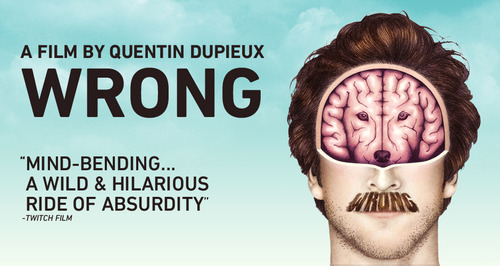 Somehow, hearing someone exclaiming how they couldn’t understand why people we’re laughing while walking out of the theater made the upcoming film ‘Wrong’ by Quentin Dupieux even funnier when we already think it’s one of the funniest movies we’ve seen this year. It’s absurdist comedy possibly at it’s best, somewhere between Charlie Kaufman, Jim Jarmusch, and a tinge of an episode of 30 Rock. Here’s the trailer to give you an idea, not to mention awesome performances all around from Jack Plotnick, William Fichtner, Steve Little, and more.