The Comedy Bureau “Tips Its Hat” this week to TONY SAM.

Any person involved in comedy that has respect for comedy as an art form will tell you, if you so ask, that one of the most important things for a comedian, or any artist really, is a unique “voice”.  There needs to be something distinguishing in the way a person is funny for them to be a truly great comedian.

The Puppy Calendar @ Comedy Carhole from Anthony Sam on Vimeo.

Tony Sam has “voice” in spades. One of the funniest people in the intensively competitive and crowded LA Comedy scene, Tony has managed to become of favorite of both audiences and comics with a brand of comedy that’s quirky, yet captivating. Through his stand-up, plethora of hysterical characters, and his actual physical voice, Sam leaves an indelible impression on anyone who sees and hears him perform.  Tony’s actual voice is so unique, drastically wandering up and down in frequency, that he makes some of the most unique characters such as Electroface and Reverend Boone Turde that are exceptionally hilarious and absolutely unforgettable.

The Reverend Boone Turde from Anthony Sam on Vimeo.

Truly, Tony Sam is part a new surge in comedy that presents the art form of comedy and where it can possibly can go.  Whether as one of his incredibly original characters (he even has one where he’s a country singer with a shark for an arm), just himself doing stand-up, or in a sketch or improv, Tony is deftly and skillfully pushing the bounds of comedy while managing to have crowds rolling in laughter.

As a result, Tony not only frequently performs around LA at some of the city’s best show, but has his own stellar show, Persona!, a character based comedy show, which has gotten stellar reviews from Punchline Magazine as well as here at the Comedy Bureau.  Taking place every month, Sam has himself and several of LA’s best comedians and they only perform as characters, which has made for quite a hit amongst a sea of fantastic comedy line-ups every night in Los Angeles.

Sam is also the head editor and writer/contributor at HahaJK.com, which, in short, is news the way you would want to hear it.  Daily, Sam posts news stories that are based on real news, but are funny just the way you would really want.

As of this week, Tony will be performing at the prestigious Just for Laughs Comedy Festival in Chicago this Tuesday and later this month he’ll be having his fantastic Persona! on June 30th at the Hollywood Improv Lab.  If that’s not enough for Tony for you, you can follow him on Twitter @toekneesam and check his website tonysam.com.  Really, any chance you get to catch Tony Sam and his many “voices” on stage should not be missed.

If you’ve been with us since the beginning, you’ve seen this one during previews month – but we made it extra special for you and combined all the parts into this beautiful twelve minute version.

There’s a reason for this extended version of A Drink With Dave w/Drew Droege. 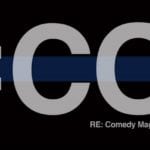 Amazing printed comedy magazine, RE:COM, is now taking submissions for their next issue.  They’re looking for anything in 600 words or less about “doing the work” as a comedian and enjoying success or starting to come up through the ranks.

The Comedy Bureau “Tips Its Hat” this week to PETE HOLMES.

Forget, only for a moment, about Pete Holmes killing it on Conan or John Oliver’s NY Stand Up Show on Comedy Central.  If you live in Portland or were so lucky to go there last month and got to catch him at the Bridgetown Comedy Festival just slaying audiences left and right like it was just another day at work, again, for a moment, forget all of that.

Comedian Pete Holmes is so funny that he can kill at breakfast.  Now, to some of you, that might not be all that impressive, but a breakfast amongst comedians and myself can be a pretty tough crowd.  Actually, one of the things I hate most is people trying to run bits or improv off each other after a show when I’m just trying to enjoy some late night breakfast.  I don’t need to hear, “What are you Willy Loman over here? Enjoying your last cup before finding you need to buy a new fridge?”

Yet, Holmes has gotten to a point where being funny isn’t a matter of switching it on or off.  The point is: he is just funny all the time.  Whatever the situation, Holmes brings the laughs.  I’ve seen him drop in on late shows where people are tired and want to go home, I’ve seen him follow complete wrecks, and I’ve even seen Pete perform in someone’s living room beneath a broken light and have the audience rolling in laughter.

Combining an uncanny likeability as soon as he takes the stage, incredibly clever writing, and a pure fun delivery, Holmes has more than earned praise from his contemporaries such as Kyle Kinane, in a recent interview with the Comedy Bureau, calling Pete his own “anti-depressant”.  Much of Holmes’ comedic genius is due to discipline in writing.  Every idea, premise, etc. that he has, he writes down, no matter where he is.  If he riffs on stage, you’ll be sure to find Holmes writing down notes right after the show about what worked.

That’s why, and now you can remember all those things I said to forget, Holmes is on TVs and stages across America, writes for the New Yorker and NBC, has a web series on Atom.com, Kid Farm, co-written with Jamie Lee, making people laugh.  Follow him on Twitter @peteholmez and check out his site www.peteholmes.com.  Also, you can catch him this Thursday May 19th at the always stupendous Super Serious Show at Smashbox Studios in Culver City 7PM; tickets here.

LA Times: Funny or Die on a mission to live large

LA Times: Funny or Die on a mission to live large

Every once in a while the LA Times steps away from Pulitzer Prize winning journalism and writes about comedy like they do here.  One question: Isn’t Funny or Die’s mission to live large implied in their name?

May 1, 2011
Uncategorized
comedian, funniest, profile, tip of the hat

Unlike a Tip of the Hat, you can actually suggest which comics are profiled on Crave Online.  Also, we don’t have sexual double entendres.

The Comedy Bureau “Tips Its Hat” this week to THE WALSH BROTHERS.

Even though I’ve been to their monthly show at the UCB Theatre a few times, both Chris and David Walsh never cease to amaze in what they come up with, which was, this time around, having 4 bass players vs. 1 bass player, an amateur karate demonstration, and enough audience plants to almost have an Inception-esque sketch fooling even the plants themselves.

While most comedic duos take the tried and true formula of having one “straight man” and one crazy, unrelenting, uncompromising character to play against each other, the Walsh Brothers take a drastically different approach.   They both, as real-life brothers, mix degrees of honesty with being completely absurd/out-of-left-field/zombies-on-a-weekday-afternoon (an actual thing that they did and taped) and, as a result, are just really their crazy selves with little compromise.

Even in while recounting stories in tandem, which comprises most of their hysterical stand-up, they will frequently interrupt each other, call each other out at certain points, go from an act out to off on a tangent where Chris will just try to sit in an “improvised air chair” and fall over, and then go back into the story.  Every act of the Walsh Brothers show is something that’s thoroughly hilarious as it’s always ripe with rich detailed absurdity, amazing depth in character, and, of course, pranks, some of which they gloriously act out.

One of my favorites is called “Personal Disco” where they kill the lights and have themselves and extremely random assortment of characters dance around one person to heavy techno music.   Though pranking the audience walks a fine line of alienating audience members, the Walsh Brothers handle every interaction with the audience with care in such a way that no one really feels unsafe in the way that a performance art piece does that no one can quite understand.

Throughout the course of all this seemingly unbridled fun chaos, unknown to the audience, Chris and David have an amazing, in-the-moment, sense of what’s working and what’s not and if it’s not, how to go about cutting to the next story/sketch/character.  I’ve seen David dance for several minutes at the top of a show as it was getting big room laughs and then softly segue into the next bit as he sensed his marching wildly around the stage had run its course. They basically know how to show a crowd a damn fine show time and again.

Though once called the “Pride of Boston” (their hometown) at a show here in LA, the Comedy Bureau is extremely glad that they’re based here as they perform their fantastic and, as one audience member shouted to me about it later, “mind blowing” show at UCB once a month and frequently at stages throughout Los Angeles.  So please check their website or Facebook page or Twitter feed or even back here at the Comedy Bureau for details on their next show or perhaps when Chris Walsh is literally “brushing my shoulders” off since I looked concerned/depressed at a bar (this really happened to me last Tuesday).