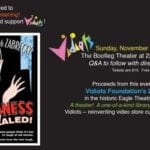 So, an actual Reefer-Madness-esque 1938 flick called Sex Madness gets a wonderful dollop of meta humor in Sex Madness Revealed! via Patton Oswalt and magician Rob Zabrecky playing a snarky film podcast host and grandson of the Sex Madness director respectively. Throughout this “tell-all” version of the film, the two have suspenseful conversation about Sex Madness.

Dreamt up, written, and directed by Tim Kirk, this film Sex Madness Revealed! will its LA premiere at the Bootleg Theater and have Kirk as well as Oswalt and Zabrecky on hand for a Q&A. Also, this evening will serve as a benefit for the brand new Vidiots coming to Eagle Rock in 2020.

There are so many great reasons to go to this and tickets are only $15. Go get them here now.

James Adomian to Launch His Own Podcast The Underculture This Week

If you are a comedy podcast fan, the chances that you’ve enjoy James Adomian’s characters and voices are very high. Between Comedy Bang! Bang!, Chapo Trap House, and a plethora of other shows, Adomian has been part of some of the best bits of comedy podcasting ever for several years.

So, it stands to reason that Adomian should have his very own podcast where he can do his characters and feature his personal favorite comedians with their characters and otherwise.

That time has finally come as The Underculture, which is such a podcast as described, is set to premiere on Forever Dog this Thurs. May 9th. Get a taste with a trailer here, then go ahead and subscribe like you know you want to.

At 9PM EST/6PM PST tonight, Fat Tony, Sandy Honig, Zack Fox, and Marie Faustin will embark on launching VICE Live, the nightly, two-hour, late night variety talk show that will be done completely live (instead of live-to-tape). We’re as curious you if they pull it off and, more importantly, what they’re going to do fill two hours. every night (every other late night show is an hour with a few half-hour stragglers here and there).

Oh, you know that, as it is a 100% millennial driven show, you’ll be able to stream it too right here.

To go back to what they’re going to do, well, we’ll let the hosts speak for themselves in this promo.

At 11PM tonight, Showtime will be stepping into the late night arena and the arena itself will get a fresh, new spark introduced to it. Desus Nice and Kid Mero already made quite the splash with their own unique take on late night over at Viceland that emphasized riffing and a more down-to-earth vibe than all the other glossier late night talk shows.

Now, Desus and Mero have got an upgrade in moving to Showtime (even an actual set with a live audience versus a conference room at Vice). From the looks of this remote segment, they have hit the ground running.

Check ‘em out at 11PM on Showtime (or, more likely, on their YouTube page tomorrow here).

It has been an entire year since we first got to marvel at the dark comedy wunderkind from Jake Weisman, Matt Ingebretson, and Pat Bishop known as Corporate on Comedy Central. It’s among the darkest workplace comedies to ever make it to TV (if not the darkest), but it has been all the better for it. In fact, we’ve been jonesing for new episodes since season 1 ended and it did make our year end top 100 list.

We got to preview the second season and it absolutely delivers the catharsis you need for the times we live in.

So, please treat yourself and catch the Corporate season 2 premiere tonight at 10:30PM on Comedy Central.

Tonight, Ed Helms return to his Daily Show roots by doing an entire fake news special that, thus far, seems to have nothing to do with The Daily Show with Trevor Noah or The Opposition with Jordan Klepper.

The Fake News with Ted Nelms premieres tonight at 10PM on Comedy Central.

Just so you know what’s coming, here’s a clip of breaking down a pressing issue: “trolls”.

However, that doesn’t mean the demons haunting Stan and company in Stan Against Evil are taking several months off.

Tonight, they’re just getting back into the groove of things as season 2 kicks off at 10PM on IFC.

With revenge seeming to be the theme of this season of Crazy Ex-Girlfriend (just look at the banner above), it seems like the series might take some of its darkest (but possibly most fun) twists and turns yet.

Remember, this was originally billed as as dark romantic comedy musical and what a perfect time to live up to that label.

By the way, you can get a taste of what’s to come as EW has an exclusive on the opening of season 3.

Season 4 of Nathan For You Premieres Tonight

Season 4 of Nathan For You Premieres Tonight

So, pull a Clockwork Orange style screening of the season 4 premiere of Nathan For You?

Bracing the eyelids of a loved one open or not, just watch Nathan Fielder do what he does best.

The Second and Final Season of Vice Principals Premieres Tonight

The Emmys will be on live at 5PM PST and will be done well before 10:30PM when Vice Principals’ 2nd season kicks off on HBO.

Even if you’re on the East Coast where the Emmys telecast might overlap, you can just check your phone every so often or something to get awards updates and enjoy Gamby/Danny McBride attempting to get revenge.

Season 3 of The Chris Gethard Show, The Guest Book, and What Would Diplo Do? All Premiere Tonight

Tonight, you have Gethard’s revered version of a talk show that defies pretty much any and all conventions, a single camera sitcom from Greg Garcia that focuses on the guests of one hotel, and a series sending-up EDM mogul Diplo, starring James Van Der Beek as Diplo.

Sounds like a pretty fun night to us if you decide to stay in.

At 10:30PM, you can continue to see how the various alien agendas continue to work their way into an endearing sitcom with the season 2 premiere of People of Earth on TBS.

Hannibal Buress Hired a Fan, Who Doesn’t Even Really Look or Sound Like Him, To Go as Hannibal to the Premiere of Spider-Man Homecoming

Hannibal Buress Hired a Fan, Who Doesn’t Even Really Look or Sound Like Him, To Go as Hannibal to the Premiere of Spider-Man Homecoming

Apparently, everyone, including people working the red carpet, just went along with the fact the guy said he was famous comedian and actor Hannibal Buress.

We can only hope that this prank is the start of a rabbit hole that Hannibal will dive much further into.

If you didn’t get a chance to catch it at UCB or Off-Broadway in NYC, tonight is your chance to see Chris Gethard’s Career Suicide solo show as an HBO special.

Specifically, it airs at 10PM on HBO tonight.

Before then, here’s Chris giving you some backstory of how he got here with this show and what it has meant to a lot of the audiences that have seen it.