TV Land will be the latest network to enter the late night foray with their TV adaptation of the popular current events podcast Throwing Shade with hosts Bryan Safi and Erin Gibson.

Take note that their arrival does mean that late night is still getting more diverse and, as can be seen in this promo, it’s happening for the better.

Throwing Shade has its series premiere next week on Thursday, January 17th at 10:30PM on TV Land. 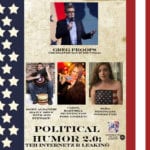 Please vote for our SXSW panel. The future of the country is at stake!

In an election year that is as divisive as any in recent memory, a snarky, slightly jaded and unflinching group of funny folk are taking action and making an impact on the political scene. Learn how the internet empowered comedians and comedy writers and how funny folk are wielding their online prowess to affect some real-world change. Join comedians and staff from The Daily Show, Huffington Post,and Wonkette in an in-depth discussion that may very well save the world!

Much of what we feature and write about here at the Comedy Bureau often takes place in a out of the way bars, coffee shops, garages, or even someone’s living room, in a few cases, as those are the places where we go to find our particular taste in comedy (also, most of the shows are free, which is a great incentive).  Yet, I understand that might be an intimidating notion for some people to go to a show where there is no stage, where the couch that you’re sitting on is perhaps where someone sleeps or where “the magic happens”.   Perhaps, you might think that it’s just a bunch of no-talent open mic’ers doing their own show on their “own turf”.  Rest assured that is not the case as plenty of comics on “those” line-ups are regularly on TV, paid to perform on the road, and are a part of an ultra-competitive comedy scene.

Thanks to both Jamie Flam, the new manager of the Hollywood Improv Lab, and Chris Hardwick, Jonah Ray, Matt Mira, and everyone else over at the Nerdist podcast for slowly, but surely revamping the back room of Meltdown Comics in Hollywood into the Nerdist Theatre, this really unique and specific problem has been now solved.

Over the past month and in the month to come, there has been a nice streak of shows popping up at both venues.  First off, brilliant comedians Eddie Pepitone and Glenn Wool did their own special shows at the Improv Lab and while the back room of Meltdown Comics has had the fantastic Meltdown with Jonah Ray and Kumail Nanjiani (recently profiled on Last Call with Carson Daly) for awhile, the Nerdist Podcast has taken to sponsoring several comedy events from a special screening of Black Dynamite, a comedy art show, and a special night of Pop and Politics with comedian Jimmy Dore.

Not too long ago, the awareness of both rooms was largely peripheral as shows and events, especially the kind featured here at the Comedy Bureau, would take place sporadically.  Being at the Improv Lab and the back room of Meltdown was largely viewed by a number of people as sort of an abstract idea, almost as if it was weird to put on a show there.  Last year, I heard a show producer at the Improv say, “Wait, we’re not at the Lab, right?  If we are, we’re screwed.  No one’s going to come.”  At that time, approximately two years earlier, there would be, in a given week, only one or two shows at the Lab and maybe zero happening at Meltdown Comics.  In a city where a line-up at the South by Southwest Arts Festival is a typical Monday night, anyone from normal people who love to laugh and comedy fans didn’t think much of a show taking place at either venue.

Now, the legitimacy for the two institutions keeps growing as solid establishments for live comedy as many of their shows and line-ups are not unlike those of the Upright Citizens Brigade Theatre considered by many to be one of the most popular venues in LA.  Instead of the occasional stand up comedy showcase that used to rarely take place, the Improv Lab is now having variety shows, interview shows, sketch and improv shows, and one show where some of LA’s best do their first five minutes they’ve ever written. The Nerdist Theatre might even have a weekly open mic in the works hosted by their very own Matt Mira (details to come as the Comedy Bureau receives them) in the coming months.  According to the Comedy Bureau “standards and practices”, those are bona fide comedy theatre that need to be attended regularly, not only to keep their doors open, but also because where you can see, in this humble blog’s/site’s opinion, where live comedy is going.