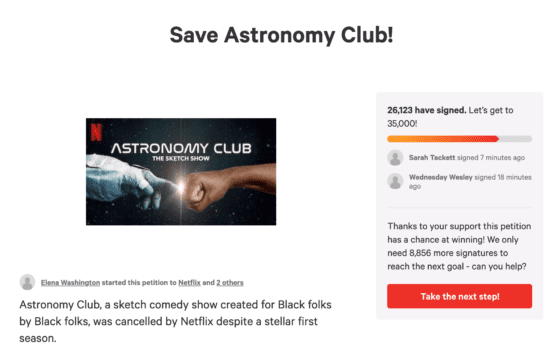 So far, much of the race to be president, especially in regards to the GOP candidates, has resembled a one-man circus.

With such a circus going on, many feel there’s only one such person to wrangle it all in, however they can, and that person is Jon Stewart.

A petition at Change.org has been started for Stewart to moderate debates and, as shown above, they are getting closer and closer to a 150,000 signature goal. The petition should meet that number soon.

We don’t know if the petition will make Stewart the moderator, but, at the very least, his name is in the conversation.

Apparently, Jane Fonda and Lily Tomlin, who play the titular stars of “Grace and Frankie” are paid as much as male supporting cast members Sam Waterston and Martin Sheen.

While the pay is equal here, the simple matter of fact is that Fonda and Tomlin are the top-billed stars of the show, which should warrant the most pay. However, it’s not the case and there doesn’t seem to be any apparent good reason for it.

Do Waterston and Sheen have a pricy rate for online streaming series these days? Even if they are, Fonda and Tomlin are just as established and that should bring back the difference in pay back to who is higher on the cast member totem pole.

It’s very similar to a sports team paying their star players as much as the rest of the team, even though they’re the stat sheet leaders night after night.

The Super Bowl Half Time Show is up there in terms of the biggest stage to perform on. Thus, only the biggest acts get to play it like Beyonce, Prince, Bruce Springsteen, etc.

With a new album debuting at #1 on Billboard, Weird Al Yankovic might just be a great candidate to play that very same half time show, which is the purpose of a petition that has started by Weird Al’s fans.

We sincerely hope this happens to not only have Yankovic’s name mentioned in the same sentence with Super Bowl Half Time alums, but we’re sure it will be one hell of a show.

A petition has been signed by enough people to address a joke during segment on Jimmy Kimmel Live that was apparently offensive to Chinese people.

The White House will now have to take a little, but still precious time away from solving The Affordable Health Care Act or other foreign policy debacles we shouldn’t be involved in just to deal with something that the Internet can just argue over until both sides get tired and further entrenched.

Challenge Against Podcasting Patent Troll Taken to USPTO by EFF

Challenge Against Podcasting Patent Troll Taken to USPTO by EFF

If you’re not at all familiar, the world of podcasting is in potential danger by what is known as “patent trolls”, people trying to obtain licensing fees off of a patent while they themselves do not enact or produce any such services or products from the very patent they’re trying to profit from.

Luckily, podcasters have banded together, specifically the Electronic Frontier Foundation and are taking it to straight to the United States Patent and Trademark Office. Hopefully, this will be resolved soon, so we can go back to listen comedians get deep with no worry.