Sara Schaefer, whose comedy we hope you enjoyed on her excellent album Chrysalis, has lined up an impressive span of dates which have her hopping around North America all summer long and finishing the off tour with a month long run at the famous Edinburgh Fringe Festival.

So, it’s a global tour that you ought to catch at one stop or another.

Get tickets for a show near you here.

The 10th Annual Bridgetown Comedy Festival will have a stacked line-up of:

As you can see, you won’t want to miss Bridgetown if you’re in or around Portland, OR next month.

The 2017 Bridgetown Comedy Festival is set for this May 4-7 and you can now get some early discounts on festival passes for Portland’s annual comedy extravaganza.

So far, Janeane Garofalo, Karen Kilgariff, Baron Vaughn, Jackie Kashian, Laurie Kilmartin, Nico Santos, and Dave Hill are all confirmed for the festival and dozens and dozens more acts will be announced next month.

If you’re going to be in or around Portland and in case you didn’t know already, do not miss out on Bridgetown. 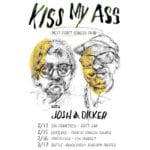 Josh Fadem & Dicker Troy (Johnny Pemberton as a truck driver/DJ/wiseman with a modulated voice) is one of the funniest things going on in LA right now (you can catch them at the end of the month in LA at The Satellite).

So, if you’re in SF, Portland, Vancouver or Seattle in February, do not miss a show that’s equal parts whimsy, chaos, tomfoolery, alternate dimensions, slapstick, and jokes.

Kurt Braunohler indeed is taping an hour long stand-up special for Comedy Central. Called Trust Me, he’ll be taping it in Portland, OR at Revolution Hall on Saturday, September 24th.

Given his skywriting, jet skiing, driving a giant butt cross country, and other such large scale acts of absurdity, we personally can’t wait to see what Kurt does with an hour of stand-up on national television.

If you can go, you should go and you can get free tickets here.

The 2016 Bridgetown Comedy Festival Is Happening Next Week

We’ve got the line-up for you here and, per usual, it’s a doozy.

Below, we have the full line-up (subject to change, of course) of performers and shows. After taking several moments to take all of that in, you can buy your passes and tickets here.

If you’re looking to do a comedy festival, this a pretty darn good one to try to get into.

Portland’s annual Bridgetown Comedy Festival is coming up, specifically on May 11th-15th. They’re taking submissions for individual performers as well as shows to come out to Oregon and delight the wonderful folks of Portland.

We sincerely hope that you have a pretty big budget for traveling to comedy festivals this year. Already Moontower and SXSW look pretty amazing in Austin, TX.

The always great Bridgetown Comedy Festival is also coming up and they just announced their line-up.

Not that you needed another reason beyond the coffee, beer, weirdness, etc. to visit Portland, but this is a pretty great one. Get your passes, mark your calendar from May 7th-10th, and do whatever else you need to do to go Bridgetown in just over two months.

2) On the final episode of Lopez Tonight, Auggie Smith will not be making a well deserved appearance.  Instead you can watch him at the Comedy Palace or if you insist on staying at home you can watch something else like the 2 slated episodes of Louie, one of which features Doug Stanhope (FX 10:30PM), Paul Scheer being on both Children’s Hospital and NTSF:SD:SUV (Adult Swim 12AM/12:15AM), and the Green Room with Paul Provenza featuring Richard Lewis, Kumail Nanjiani, and more (Showtime 11PM).

3) Was Aziz Ansari in the Zookeeper?

6) Ben Stiller’s Red Hour is going to make a series of fake trailers.

7) Huffington Post made a list of comedians that could replace the slot that George Lopez will vacate tonight. Our first thought: You’re damn right Paul F. Tompkins is on there.  Also, glad that Reggie Watts, Jimmy Pardo, Marc Maron, Andy Richter, Julie Klausner, and more are included.

8) So, Brody Stevens/@allthingsbrody hasn’t had something tweeted or retweeted in his feed for almost an entire day, right around when this Laughspin article we wrote about Brody was posted.

9) Chuck Klosterman’s piece on Louie for Grantland makes ours for Laughspin look like a “nice try”.

10) Nick Kroll interviews Always Sunny in Philadelphia’s Rob McElhenney about getting fat for the show.

15) Hey people that try to differentiate between alt and mainstream comedy, CAN WE JUST GET BACK TO JUST WHAT’S FUNNY?

2) Congrats to Melissa Villasenor on moving onto the semifinals of America’s Got Talent and actually proving the show’s title right.

6) While it’s enticing to hear that there is going to be a series, Laughing Stock, where Steve Carell interviews comedians, please read Steve Heisler’s post about what makes a ‘definitive’ interview with comedians. [via CleftClips]

11) Man, being famous at open mics really isn’t all it’s cracked up to be.