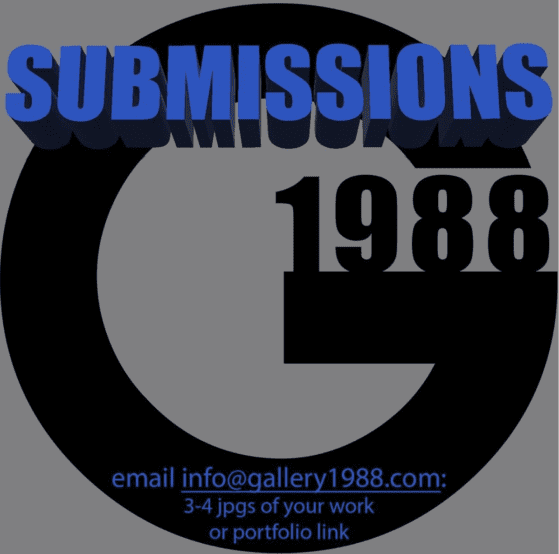 One of our favorite art galleries in all of LA (and what might be the preeminent pop culture art gallery in the U.S.) is Gallery 1988 as it is one of a handful of places where art and comedy very directly intersect. They’ve hosted exhibitions of art dedicated to anything from The Simpsons to SNL to It’s Always Sunny in Philadelphia to classic stand-up comedy and so much more.

Now, in these times, they’re taking a big leap by announcing an open call for submissions for the next few shows coming up. Just send 3-4 JPEGs or link to site to info@gallery1988.com and if they dig your stuff, they’ll reach out to you within four weeks.

If you have a penchant for making wonderful, curious, amazing art that’s very likely inspired by something in pop culture, you really ought to submit.

We’ve only done this a few times in 17 year history – but we’re calling for submissions! We know more artists are home creating than ever before and we have some great shows coming up. Please send 3-4 JPEGs or a link to a website to info@gallery1988.com (no theme needed). We can’t respond to everyone, but if your work fits for an upcoming exhibit – you’ll hear from us within 4 weeks. THANKS!! 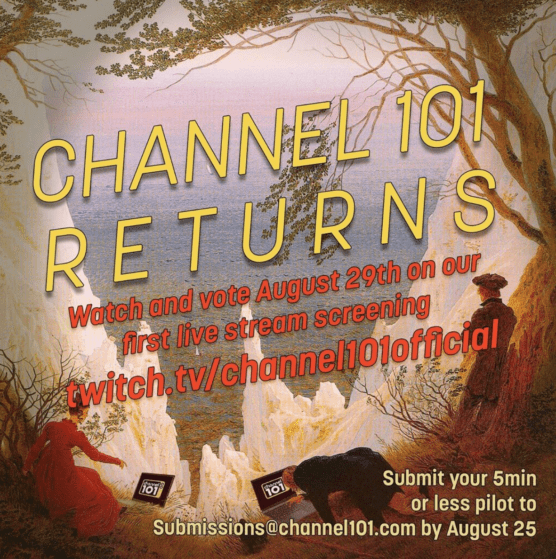 The mighty indie short form TV institution known as Channel 101 (pretty much the birthplace of Rick & Morty FYI) has kept themselves going throughout lockdown, despite not being able to have their renowned monthly screenings. They’ve screened entire series from their archives, taken up audio pilots, and even done micro versions of a normal Channel 101 program via Twitch.

Now, with several months having passed in quarantine, they’re now ready to take on doing a full-length, virtual Channel 101, which means that they’ll be accepting brand new 5 minute or less pilots to enter the Channel 101 fray.

The deadline to submit is by Aug. 25th at submissions@channel101.com. The screening will take place only a few days later on Sat. Aug. 29th. Find out more about Channel 101 at channel101.com .

With the power of the internet we're BACK! Channel 101 will have it's first live stream screening Saturday, August 29th on our twitch channel (twitch.tv/channel101official) Submit your 5min or less pilot to submissions@channel101.com by August 25th and check out the current Prime Time line up at channel101.com 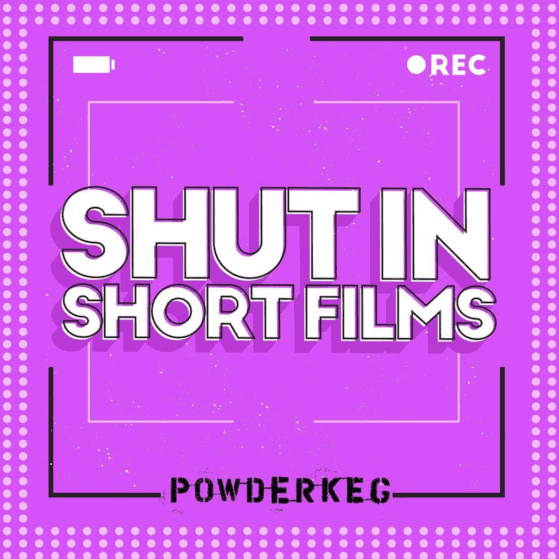 They’re gearing up for their 2020 run and are now taking submissions for stand-up comedy here.

Deadlines and fees are as follows:

Their picks for the festival will be announced Mar. 9th, 2020. Go get all the info and submit for The 2020 Laughing Skull Comedy Festival here.

Finally, someone is giving another shot at throwing a legit comedy festival in LA.

The Southland Comedy Festival, set to debut Jan. 7th-11th, 2020, will feature the best stand-up they can find in and throughout the LA scene at comedy clubs, bars, underground venues, and more. For specific showcases, they’re really try to go out of their way for industry execs and reps to be see bright, shiny, new stand-up talent that ought to be elevated.

Get more details in general about the first Southland Comedy Festival here.

Stand Up NBC Returns to Find Stand-Up Talent Across America

Stand Up NBC Returns to Find Stand-Up Talent Across America

Stand Up NBC, the annual nationwide search by NBC for diverse stand-up comedy talent is happening again over the next several months with open calls in Chicago, Los Angeles (that’ll actually be in Oxnard for some reason-so get ready to drive for that one), Nashville, New York and Seattle (Bellevue). You can also submit a short clip as well within the given window of dates based on your location.

Los Angeles dates are as follows:

You’ve got time to get a set together, but, in the meantime, you can get more details here.

But – next best thing – on January 16th, you’ll perform your monologue on the Cort Theatre stage introduced by This American Life’s Ira Glass. In other words … your own Broadway debut! (Nathan Lane: please do not apply.)

To be clear, I don’t want you to impersonate me. I want to see YOURversion of it. You can post the videos on Instagram or Twitter or Facebook with the hashtag #BirbigsUnderstudy. Be sure to tag @NewOneBway!

Thanks for throwing your hat in the ring! Really looking forward to this.

Even though it’s ultimately a minute or so of stage time and you’ll be performing a monologue from Mike’s old solo shows, this definitely is something you might want to get in on.

Also, we would not be surprised if this ends up being the seed or a major plot point for Mike’s next show.

Snapchat Is Launching a Comedy Creator Initiative and Is Taking Submissions Until Nov. 30th

If you’re on or dabbling with Snapchat these days, here’s a nice little opportunity for you.

Snap is looking to produce 10 different short form comedy series that feature 3-5 min. episodes to feature on Snapchat. Those picked from submissions will get $20K to make the 10 episodes.

If you’re into it, you can find out more details and submit here.

The International Songwriting Contest takes in thousands of entries every year in an attempt to highlight the songs of new talent. Within that field, they’re also looking for entries in “Comedy and Novelty”, which covers musical comedy, parody songs, stand-up, and recordings of comedy groups/troupes.

There are cash and other prizes for top placing finalists throughout the ISC and all finalists are listened to by a special judge panel that includes the head of Comedy Central Records. Past winners have included two favorites of ours Rachel Bloom and Garfunkel and Oates.

You don’t have to worry about censoring content and there is no official running time/time limit for entries. All material must be original and all writers must be credited. Entries are being taken from now until Wednesday, September 19th at $30 per entry.

If that all sounds good to you, get more details and enter here.

The world famous Second City will be having their latest LA Diversity in Comedy Festival from October 11th-14th. They will be featuring diverse sketch, improv, and stand-up and, as such, are accepting submissions up until Saturday, September 1st.

That gives you a month (i.e. plenty of time) to get your submissions in.

One of favorites venues in town is doing yet another cool thing by throwing their very first short film festival.

The Lyric Hyperion Short Film Festival, produced by Philip “Dr. Brown” Burgers & Joshua Turek, will be an all day-and-night affair that’ll showcase the best shorts they can find, which ought to be pretty good considering the sorts of shows and screenings that they’ve been doing at The Lyric Hyperion over the years (just go through our listings here at TCB if you’re not familiar and you’ll notice plenty of Lyric Hyperion events).

The submission deadline is Wednesday, August 1st with a more than reasonable fee of $10 and films are to be no longer in running time than 30 minutes. The festival itself will take place on Saturday, September 1st.

If you’ve got a great podcast idea, but are looking to be part of a network (and have a budget to produce it), Gimlet Creative and Squarespace’s Casting Call contest might just be the thing for you.

They’re having an open call for submissions for podcast ideas until May 21st.

Our panel of judges will join host Jonathan Goldstein to select three applicants to fly to New York and produce their pilots. At the end of the journey, one talented hopeful will be awarded a mini-series produced by Gimlet and maybe even a Squarespace sponsorship of their own—because is a podcast even a podcast without one?

Get more details and enter here.

Whether scripted or unscripted, TruTV will be looking once more for new ideas via a contest at the New York Television Festival.

It’s free to enter and you should keep in mind that they’re looking for something with a distinct point of view. Submissions open up on May 2nd and are accepted through May 23rd. The winner, who will get a $25K budget to officially develop the project with TruTV, will be announced in July.

Just For Laughs and Kevin Hart are holding a short film contest called “Eat My Shorts” that will not only have 5 films screen at the one and only JFL Montreal Comedy Festival in July, but have one filmmaker/team get a development deal through the LOL website/app.

Submission rules/guidelines:
-They’re looking for films that speak to diverse, multicultural, millennial audience
-Total running time must be no less than 3 nor more than 22 minutes in length (including credits)
-All languages will be accepted but subtitles must be in English
-Submission deadline is May 13th.

Best of all, there’s no purchase necessary to enter or win.