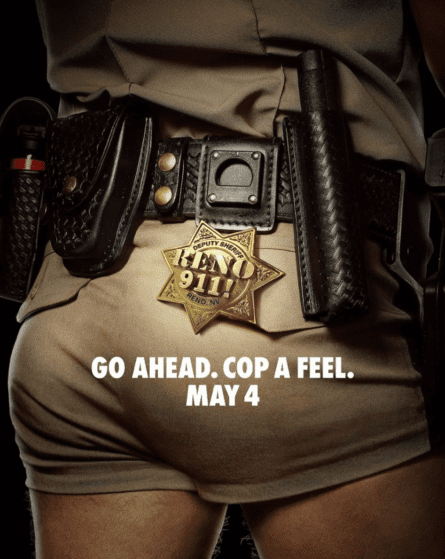 Of the offerings that Quibi has since its launch this week, one of the more high profile things coming to mobile only streaming platform is brand spankin’ new episodes of the beloved cop mockumentary Reno911.

It was announced today that Thurs. May 4th will be officially when new Reno911 episodes will come to Quibi and, if you can’t wait that long until that date, you can enjoy some mini-sodes that have been made while in self-isolation over Zoom (as even Reno’s “finest” is observing social distancing).

Crime shows, both true and fictional, have never been as big as they are now.

So, TNT, which primarily has operated a drama channel that’s chock full of scripted hour long series following detectives, criminal families, etc. is now getting into some true crime comedy.

Their new series debuting this Summer, Claws, shows a lot of promise, almost a darker version of Weeds, set in the world of nail salons with Niecy Nash as the star. Also, we’re excited that the creator, Eliot Laurence, is the writer of the under appreciated, Welcome to Me.

Watch the trailer here, then look for the series premiere on Sunday, June 11th on TNT.

There’s a lot of things to be excited for here including:
-Rashida Jones making more television
-TNT expanding its branding into dramedy.
-another female led ensemble underworld that might give that newly announced DC female villains movie a run for its money
-Niecy Nash starring with diverse cast
-a dark dramedy centered around a nail salon

Look for 10 episodes of Claws coming next year.

This is a nice counterpoint to that infamous, inflammatory, and completely unnecessary Christopher Hitchens essay from 2007 voiced by some of the most notable funny people around today that just happen to be women.

Sure, 2007 was almost a decade ago and there has always been evidence against Hitchens, but it’s always fun to skewer his Why Women Aren’t Funny piece every once in awhile.