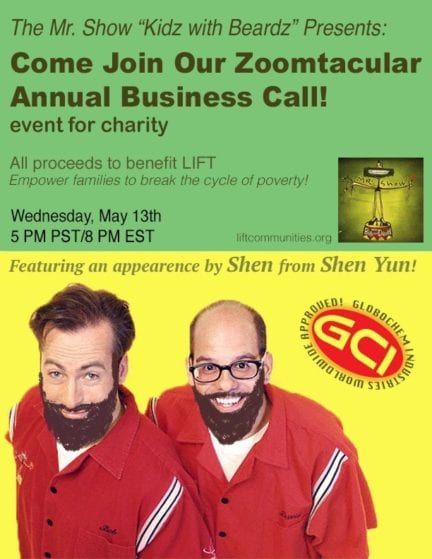 Mr. Show is having a reunion.

That should be enough of a sell for you to buy a ticket to, well, anything that has the seminal, foundational, legendary sketch series from David Cross and Bob Odenkirk gather once again. This Zoom live-stream show will not only have Bob and David, but the storied Mr. Show writers/performers including: Paul F. Tompkins, Scott Aukerman, Tom Kenny, Jill Talley, Jay Johnston, Brian Posehn, Brett Paesel, and John Ennis.

Also, the Mr. Show Zoomtacular Annual Business Call Event for Charity will actually be for a real charity (and not just some meta bit). Proceeds will be going to LIFT, an organization dedicated to specifically breaking the cycle of poverty, which is more crucial than ever in these times.

On top of that, tickets for this special Mr. Show reunion will only cost $12.20 (that includes the service fee), when you’d probably pay at least triple if you were to see this in person. So, with all of that said, support a great cause and see a historic comedy event this Wed. May 13th at 5PM PT/8PM ET and get your tickets here already.

Watch Bob Odenkirk Explain His Inspiration for Two of His Sketches

If you’re in comedy, you’ve might have heard someone tell you that all comedy, no matter how abstract or silly, comes from observation.

Bob Odenkirk’s chat on The Off Camera Show with Sam Jones perfectly exemplifies that notion as he relates two real-life experiences and explains the absurd sketches that came from them.

Already, Netflix has brought back Arrested Development, Wet Hot American Summer, and more and will now add to that list the likes of Bob Odenkirk and David Cross doing episodic television for their new show With Bob and David.

As Odenkirk has stated, it’s not going to be Mr. Show, but rather a new and improved sketch show with a lot of the same folks involved.

With Bob and David is currently in production and let’s hope we get to see it sometime later this year.

It’s Not Going To Be a “Mr. Show” Reunion, But Something Still With Bob, David, and The Writers of “Mr. Show”

There’s has been plenty of chatter around what could have been a reincarnation of Mr. Show with Bob and David for the last couple of a months now, but, in a recent Rolling Stone interview, Odenkirk offers some clarification in order to simultaneously quell rumors about Mr. Show coming back, but also keep us all excited.

Basically, there will be the same writers, as seen here, and Bob Odenkirk and David Cross will be the stars, but the show itself, as it would seem, will be something brand new and, by our estimation, something potentially even better.

The gathering of the moving parts of Mr. Show now looks like a comedy super group with such likes of Paul F. Tompkins, Scott Aukerman, Brian Posehn, and more all coming back.

Odenkirk himself says, “Better Call Saul is not Breaking Bad, but it’s written by the same writers and you can see connections, right? It hopefully will be quite the same as far as the relationship between the two shows.”

Still, with all of this being said, there are no details as to exactly where this new show will end up or when we can see it. Given Cross’ experiment with Hits, they’re probably exploring every single option online and on TV and maybe even elsewhere before they move forward.

In any case, you still should be excited for what’s happening here.

Bob Odenkirk Looking to Revive “Mr. Show” Rather Than Do a Reunion

(via The AV Club)

Instagrams of the old Mr. Show crew writing together again and Kickstarter prizes from David Cross’ Hits have set the Internet ablaze with the possibility of a Mr. Show reunion happening this year. However, it’s not as simple as a cut and dried one-off reunion according to Bob Odenkirk in a recent interview with The AV Club.

On the subject of a new Mr. Show, Bob says:

“However, we are working on new sketches and a new show together. And we want to do multiple episodes of it. And yet we’re limited. [Cross has] sold two series in England and I have Better Call Saul to attend to. So we have limited time, but we do want to do a new series of sketch comedy that’s new sketches and new energy, and we are laughing our asses off writing it.”

So right now we don’t know where it’s going to play. We just don’t know. But we’re trying to nail it down quick. We’re talking to people now and everybody knows how fast we have to move on this. Because people have jobs and they have to know what they’re going to do in February and March.

So, networks and streaming services alike, you have been put on notice to make the new Mr. Show happen ASAP.

In lieu of a traditional indie film release, David Cross is taking cues from Radiohead and Louis C.K. in order to get his film Hits to fans more directly.

Cross wants to play Hits it in select cities across the country as well as on BitTorrent for a Pay-What-You-Want and also a release on iTunes, etc. To do this, he’s going looking to raise $100K on Kickstarter to do this all on his own and the more money that’s raised, the more cities they can visit.

As you’d expect there are some great rewards for helping crowdfund this experimental film release of David Cross’ Hits. One of them is being in the background of a Mr. Show reunion.

That’s right, Paul F. Tompkins wasn’t deceiving us when he tweeted out this picture on New Year’s Eve and a reunion of David, Bob, Jay Johnston. Scott Aukerman, Paul, and more is indeed happening this year.

Eight men out… of the 1990s. Maybe something new coming from the Mr. Show gang in the new year? #MrShow pic.twitter.com/gBy8CQ49nv

With all of that said, get in on all of this.

This latest one with the one and only David Cross is another such episode as they go over Cross’ new movie, good times at Mr. Show, and more. Watch the whole interview here.

Having been accomplices in various acts of tomfoolery over the years, especially on Comedy Bang! Bang!, Paul F. Tompkins and Scott Aukerman don’t appear on camera sans character often.

It’s kind of weird that David Cross is going on tour with Bob Odenkirk and goes on Late Night with Jimmy Fallon to promote it, then Bob is just busy, right and can’t be there?

RIght? Well, luckily, Cross’ biggest fan was there to make up for it. Watch the clip here.

We have heard off hand announcements from Bob Odenkirk that both he and David Cross would be doing a tour of sorts for both promotion of their book as well as just to perform for awhile now, but the days to that coming to be are closer and more real.

Odenkirk just tweeted that not only will all the above happen, but Brian Posehn will be joining them and tickets will go on soon for their tour that begins in September. Dates and pre-sale tickets links can be found @mrbobodenkirk on Twitter.

Paul F. Tompkins and Bob Odenkirk Have a Drink and a Chat

Two of our favorites in comedy, Paul F. Tompkins and Bob Odenkirk, have a drink and nice, long intimate conversation on Tompkins’ Speakeasy web series.

Of course, they revisit Mr. Show, unpublished screenplays, and more fun tangential tomfoolery, so get ready to spend your lunch break watching this.

Called Festival Supreme, it’s going to take place at the Santa Monica Pier Sat. October 19th, and if you have the dough (tickets go from $99-$250), you can be part of what could be pretty amazing.

Coupled with the LA Podcast Festival taking place two weeks before also in Santa Monica, you might want to stay on the west side of LA for comedy in October.

Two things regarding this:
1) This should be really great and you try to get tickets when they go on sale.
2) If you do get to go, resist in yelling out the name of your favorite Mr. Show sketch in the hopes that they’ll do it live.

Not only does this latest podcast offering from the great podcast collective, Feral Audio, come from Eric Hoffman from Mr. Show, but it also features the likes of Matt Walsh, Liam Lynch, Bob Odenkirk, Matt Besser, and more.

Also, it’s about a dumb super villain, which already had us sold. Listen to the first 3 episodes of Brainwarp: The Baby Eater here.