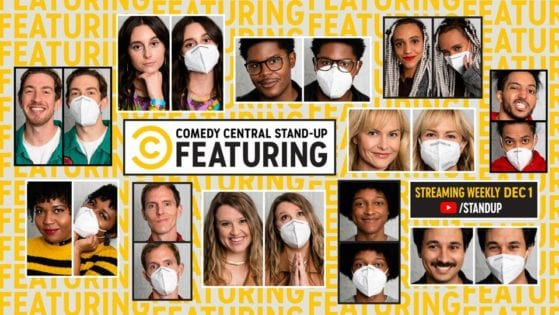 With stand-up comedy getting its footing with outdoor shows (wherever they can happen), it was inevitable that a network would make a run at trying to film it in order to have some brand new stand-up content.

Comedy Central went ahead and did another round of their popular stand-up digital series Comedy Central Stand-Up Featuring in NYC with a socially distant, masked audience (probably done a little safer than SNL form the looks of it) taped outside. The trailer for this latest batch of exclusive stand-up showcase sets almost resemble something like normal, before-times stand-up, but, of course, the material and the cutaways to the crowd are very much of the moment of the COVID-19 pandemic we’re in right now.

Take a look for yourself with the trailer for this round of Comedy Central Stand-Up Featuring here, then look for it to start streaming on Comedy Central’s Stand-Up YouTube channel every week starting Dec. 1st.

Sometimes, being on ‘edibles’ in a tense situation is strongly advised against.

However, Monroe Martin found going on a date and discovering that he had mistakenly ingested a cake that was the special kind of ‘edible’ and managed to make the best of it.

He traced all his steps through his drug trip that happened on said date in his set at Live @ The Apt.

NYC’s Monroe Martin notched his very first appearance, a very good one at that, on The Tonight Show Starring Jimmy Fallon this past week.

Watch his set here and mark down his name somewhere as you’ll probably want to keep tabs on him.