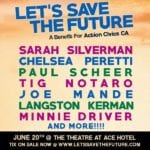 Action Civics CA, an organization to educating the youth into being informed, responsible citizens of the world, is throwing another huge comedy benefit at DTLA’s Theatre at Ace Hotel that features many of your favorite comedy folks (really, just look at that line-up that will probably have more huge names added as they get closer to the day of).