Coming to know James Adomian remains as one of our fortunate strokes of luck in all of our time in comedy. The brilliant comedian, impressionist, voice over artist joins us for this week’s TCB Field Report to recount how he has made it through all the continuing trials and tribulations of the last year including, but certainly not limited to, international comedy tours getting cancelled, the tragedy that befell Armenia by way of Azerbaijan, and no critical breaks on rent. That said, Adomian still voiced a cornucopia’s worth of cartoons on major networks, streaming services, and even on Snapchat. Also, James got to satirically confront the My Pillow guy Mike Lindell on Jimmy Kimmel Live as Mike Lindell and is ready to get back into the swing of comedy, virtual and otherwise.

Follow James @jadomian on IG and Twitter, buy tickets to his Nowhere Comedy club headlining show on Fri. 5/7, and please support The Children of Armenia Fund. 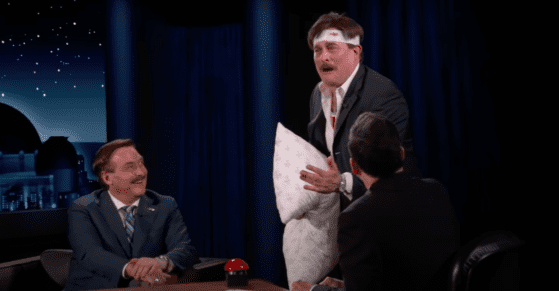 Jimmy Kimmel Live could have kept tapping the brilliant James Adomian for his masterful impersonation of My Pillow’s Mike Lindell and that, by itself, would have been a very satisfying running bit.

Yet, the late night gods were dreaming about something a bit bigger and getting a little bit gonzo with the whole thing. Jimmy Kimmel, after dedicating several minutes of his monologue that he has dedicated to roasting Mike Lindell, invited him on the show and, surprisingly (and against the advice of everyone) accepted the invitation.

We had a feeling that Adomian’s Lindell might be part of a bit within and around Lindell chatting with Kimmel, but what actually happened was so much better. Jimmy had the latter half of his monologue centered on dealing with a severely disheveled Lindell as played by Adomian. Of course, it was hysterical and thrilling with the real Mike Lindell lurking around backstage.

Then, Kimmel brings out the (supposedly) real Mike Lindell and has a somewhat jovial conversation that does eventually turn to trading jokes about Mike’s former crack addiction for Lindell, yet again, voicing some of his more wild beliefs about voter fraud. In the last two minutes, Adomian comes out to do his Lindell to Lindell himself. It’s amazing and it kind of left Mike with no moves except to laugh at the (only slightly) funhouse mirror version of himself, which, as you can imagine, doesn’t happen too often.

Well, Adomian has actually gotten to do that quite a bit including with Bernie Sanders and Andy Kindler because, well, James is just that magical. For so long, late night was relegated to MacGyver-ing its shows due to the pandemic, having to do interviews over Zoom and doing their take on a lack of audience on top of dealing with America and the world being more in crisis than it has been in a very long time. There were a lot of growing pains and even as they figured it out as the months wore on, it just wasn’t the same late night irreverence that the whole time slot is meant for.

Honestly, the tonal and format issues were a bit of a problem even before the pandemic, but part of that did have to do with a notable lack of the comedic brilliance of one, James Adomian. Noted for his characters, impressions, his own stand-up, and a litany of treasured podcasting (please revisit The Underculture), Adomian has, in our opinion, not gotten his due even though he was Bernie Sanders opposite Anthony Atamanuik’s Trump and is the voice of so much of your favorite animated series.

Thankfully, Jimmy Kimmel Live tapped Adomian to play My Pillow founder Mike Lindell as Lindell has really seemed to become more unhinged and wild as of late, even more so than his desperately earnest My Pillow ads. Adomian has been doing an impression of Lindell for years and it’s truly a blessing that it’s now getting put to good use with one of the best late night bits in however long it has been since March 2020.

Let’s hope this means we get more of Adomian anywhere and everywhere (maybe give him his own sketch show already?).

Enjoy Adomian as Lindell on Kimmel in his two appearances on Jimmy Kimmel Live here and here.