Though long form improv has been an established discipline in the art form of comedy for decades now, the prospect of seeing it in the form of a comedy special has been incredibly rare. The last time we even remember seeing something like that was when Schwartz led off a night of improv with the cast members of House of Lies.

Now, Thomas Middleditch and Ben Schwartz together as Middleditch + Schwartz, arguably one of the most successful long form improv teams in comedy history, will be blazing a new trail by making a special out of four tapings recorded at the NYU Skirball. The tapings are almost entirely sold out at this point, but the promise of what this might be is incredibly enticing.

Admittedly, putting long form improv as a special proves for an especially hard challenge as the nuance and ephemeral nature of improv comedy begs that you don’t cut anything from the entire performance. We’re not sure exactly what Ben and Thomas’ strategy for the final product will be, but it’ll undoubtedly set a new precedent in comedy. 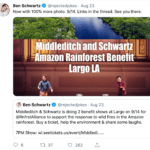 Thomas Middleditch and Ben Schwartz are, together, one of the most renowned improv teams around, Middleditch + Schwartz, and they’re assembling again for a special night at Largo to benefit saving the Amazon Rainforest that’s under threat once more.

We have no doubt that this Sept. 14th show will sell out (maybe they’ll add a late show soon?). So you best get your tickets for $47.30 a pop (and support a very urgent cause at the same time) real quick right here.