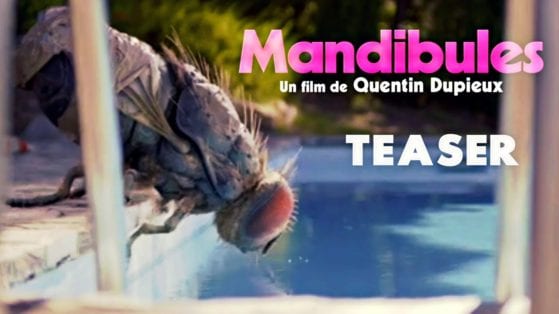 The mind that brought you Wrong, Wrong Cops, and Deerskin is back with what looks to be another bonkers absurdist journey (that’s somewhat grounded in a certain type of reality). Quentin Dupieux has always been one to really wreak some fun havoc on the “deep end”, so to speak. So much of his filmography we’ve enjoyed for how brilliantly daft and wildly imaginative it is.

His latest piece, Mandibles, a French language comedy, follows two men who discover they have a giant fly in in the trunk of their car. While startling, everyone seems pretty cool about it and are wondering how to be chill about having the one of a kind giant fly (noticeably not like Jeff Goldblum as a fly) around or even what to do with it. We’re pretty certain that this trailer only scratches the surface on how magnificently weird Mandibles will get.

Mandibles just played the Venice Film Festival this past weekend. We’ll keep you in the loop if and when you’ll be able to see it/stream stateside.