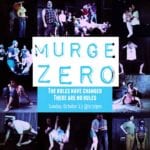 The Murge, which already has been a highly experimental improv show that pretty much had no rules, is going to follow even less rules in their new form as Murge Zero without former Murge director John Gilkey.

So, a collection of LA’s favorite idiot performers, will fly as close to the sun as possible with fourth-wall-less improvised bits and scenes that are daring, sometimes dangerous, hysterical (sometimes literally), and almost unbelievable.

Don’t miss Murge Zero at The Clubhouse this Sun. Admission is donation based FYI. Get more details here.