Unquestionably, one of the best parts of Love on Netflix is Bertie played fantastically by Claudia O’Doherty.

As the series is coming to close, O’Doherty, during her Conan appearance this week, “revealed” that she’s looking for work and can do more than just be a expertly silly Aussie that has a particular talent for not breaking character.

Really, more Claudia O’Doherty in the world is just a good thing. Watch this bit here.

As Valentine’s Day looms in the coming hours, we thought it’d be kind of perfect to watch Krystyna Hutchinson’s fantastic story from this latest season of This Is Not Happening.

It’s a story of overcoming the odds to not only find true love, but come to peace with your own insecurities and anxities. Also, the co-creator of Guys We F****d’s tale is pretty NSFW. 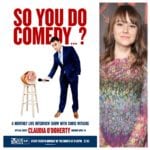 Between her own innovative live performances and her roles in Trainwreck, Love, and more, Claudia O’Doherty is definitely one of the more fascinating comedians working today and one that we would love to know what makes her tick comedically.

The latest so, you do comdedy? at UCB Sunset on April 24th might just get to the bottom of that.

David Gborie is unequivocally a delight and has been so for the years that we’ve known him and seen him going up around town.

This first late night on last night’s Conan set is a trip to “applause break city” throughout and shows off David’s undeniable charm and how great, insightful, and heartfelt his material is.

You can watch Gborie’s set on Conan here.

Valentine’s Day may be past us all (thankfully), but that doesn’t mean you can still reexamine the complexities and futilities of modern relationships and romance by binge watching the latest Netflix series.

All 10 episodes of Love, from Apatow, Arfin, and Rust with Rust and Gillian Jacobs starring are now streaming on Netflix.

Judd Apatow’s next series after Girls, that he’s overseeing along with Paul Rust and Lesley Arfin, is coming to Netflix and seems to seems to stay in that somewhat grounded reality of questioning the old template we have for relationships and relationship dynamics.

Paul Rust and Gillian Jacobs also seem like a fun pairing as well.

Watch the trailer for Love here, then look for all episodes to start streaming on Feb. 19th.

There isn’t any footage from the show or any footage of anything at all really in this teaser for Netflix’s new comedy series Love from Judd Apatow, Lesley Arfin, and Paul Rust.

Instead, there’s a montage of title cards that offer some more realistic resolutions. We’re guessing that’s a list of issues that are going to come up in the series between its stars Paul Rust and Gillian Jacobs. Let your imagination run wild with that until a proper trailer drops.

Not only has Netflix set up the return of Judd Apatow at the head of his own TV show (remember Freaks and Geeks and Undeclared?) with a nice top billing of Gillian Jacobs and Paul Rust, but they’re not wasting any more time in development by ordering Love straight to series and doubling down with two seasons.

Currently, there are few details about Love other than it will explore the sort of fragile, counterintuitive relationships that Apatow loves delving into.

So, with that, Netflix must know something great that we all don’t know with two seasons ordered.

As far as Hulu’s original series go, this would be a great get. A pilot entitled Love, which is produced by Judd Apatow and co-written by Judd Apatow, Lesley Arfin, and Paul Rust might move forward with Gillian Jacobs as its star pending a few potential contractual and scheduling conflicts.

Somehow, Spanish filmmaker Nacho Vigalondo got a beer company to help him make this short film on love that is not only amazing and very funny, but a rumination on the concept of love.

Please watch all the way to the end. It’s absolutely worth it.