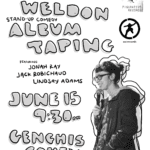 A delight within the LA scene, Paige Weldon, is recording a whole comedy album about two weeks.

It’s free to attend AND you’ll get to sit in pews within a Chinese restaurant. Also, they’re so great guests on the show as well as you can see above.

Matt Dwyer’s First Album “Inside Looking Out” Is Out Now

It’s a bit of a surprise to us that Matt Dwyer hasn’t had an album under his belt already given his exhaustive comedy resume, but perhaps that is what makes this first album feel special and imbued with a sense of urgency.

Inside Looking Out is indeed Dwyer’s first album is being released by Jonah Ray’s imprint label Literally Figurative Records off of AST Records. Dwyer impressively spans his comedy repertoire, both in content and form, which he delights in as there is a lot to cherry pick from. He includes traditional stand-up, song, and reading of short form pieces that come from a very a brutally honest and sincere place, but, sometimes, ratchets the absurdity up to the nth degree. For all of that, Inside Looking Out gives you a really expansive scope of comedy at its core and its fringes.

You can get Inside Looking Out off of iTunes or on 12″ red vinyl. You can also stream it on Apple Music.

This 14+ min. record of Paige Weldon, Uncomfortable at Best, is evidence that there are many delightful comedians that are, in a way, hiding in plain sight in and around the gigantic LA comedy scene. You get a taste of Paige’s disarming, self-deprecating, but easy going charm and hope that a longer record is in the not so distant future.

Get Paige’s Uncomfortable at Best from Jonah Ray’s Literally Figurative imprint off of AST Records here.

You’ve heard of album recordings done in bars before, but probably none like Bar 107 in Downtown LA. It is rather on the small side of a venue, but, nonetheless, a favorite hang of many comedians when in downtown.

Matt Dwyer will be recording his comedy album “Reluctant” there for Jonah Ray’s Literally FIgurative Records off of AST Records come next week, Sat. Jan. 17th at 4PM.

You’ll already be downtown for Riot LA, which is only a few blocks away, anyway. So, this would be the perfect to start off next Sat.