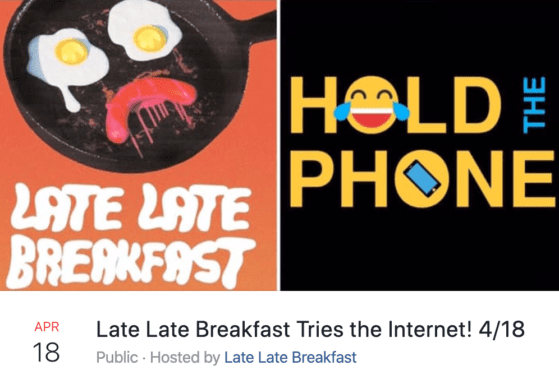 Pick of the Day: Late Late Breakfast Tries the Internet 4/18

One of the most bonkers comedy shows around, Late Late Breakfast, is going live on a live-stream! For the uninitiated, Late Late Breakfast issued random challenges and games for comedians to do while trying to do their act including having to make as many burgers as possible, fighting with paper airplanes, having to do a plethora of impressions, and more. Personally, we’re excited to see how they will pull off their crazy format via Zoom/Twitch.

As always, Tyler Jackson and Danny Maupin will preside as hosts of the controlled chaos and they’ve wrangled quite the line-up from around the country including:

Tune in and witness the madcap delights of Late Late Breakfast on Sat. Apr. 18th at 1PM PT/4PM ET at Holdthephone.tv 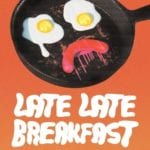 The (somewhat) unbridled, beautiful chaos of Late Late Breakfast is back for a special one-night-only event deep in the Valley, all the way in Canoga Park.

For the uninitiated, Late Late Breakfast combines the obstacles of absurdist game show with stand-up comedy by having comedians attempt to tell their jokes while having to play volleyball with the crowd, fitting in their jokes between choruses during a karaoke sing-a-long, etc.

This latest edition of Late Late Breakfast will happen on Fri., Dec. 6th at 8PM. Admission is free, but donations are accepted! Get more details here (FYI, they’ll probably post address on or near day of as it is a backyard show). 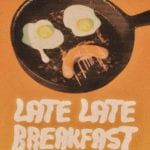 The somewhat controlled chaos of Late Late Breakfast is finally back with more hysterical, insane challenges for LA favorites in stand-up to attempt while doing their sets.

Hosts Tyler Jackson and Danny Maupin will be at Lyric Hyperion in Silverlake this time around on Sat. Jul. 20th at 4PM. Tickets are only $5 for what is truly a beautifully bonkers experience. 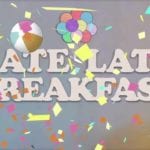 Well, with the holiday season upon us, the gifts are coming early. Specifically, another edition of the crazy variety/stunt stand-up show known as Late Late Breakfast is coming before 2018 closes.

This Saturday, November 3rd, Tyler Jackson & Danny Maupin host a cornucopia of comics attempting to do stand-up while facing some of the most absurd challenges they can come up with.

So, once you’re rested from Halloween tonight, get yourself to Silverlake Lounge (2906 W Sunset Blvd.) on Saturday. Doors open 4PM and the show begins at 5PM. Donations will be accepted. 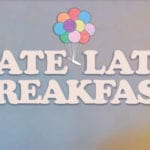 This is just a friendly neighborhood reminder that one of the most bonkers, down right fun comedy shows, Late Late Breakfast, is coming around to LA again on July 7th.

Tyler Jackson and Danny Maupin make stand-ups go through insane challenges while telling their jokes that involve anything from preparing food, taking on the attitude of the seven deadly sins, the audience doing karaoke, etc.

It’s controlled chaos at its best and you shouldn’t miss it for anything.

Again, the latest edition of Late Late Breakfast will be on Saturday, July 7th at Silverlake Lounge with doors opening 4PM. The show does take donations! 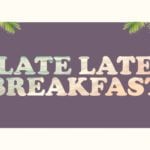 Let’s face it. You’re probably not getting back into the swing things from the holidays into 2018 until next week. A nice way to ease into the new year if that’s indeed your plan is going to afternoon comedy show on Saturday with the likes of Kyle Kinane, Billy Wayne Davis, Megan Gailey, David Gborie, Maggie Maye, Danielle Perez, Josh Androsky, Jamie Loftus, Ryan Singer, Allen Strickland Williams, Erin Lampart, Barbara Gray, and Steph Tolev at a dive bar.

With that in mind, catch Chicago’s Late Late Breakfast from Tyler Jackson and Danny Maupin at Silverlake Lounge (2906 W. Sunset Blvd., Los Angeles, CA) this Saturday, Jan. 6th at 4PM (Doors at 3PM) for what should be a lovely way to sober up for the first Monday where everyone goes back to work. Donations will be accepted.