When it comes to the world of long form improvisational comedy, the names Del Close (whose name you might often heard coupled with the title of ‘the father of modern improv’) and Charna Halpern are crucial to telling that story. As that sort of improv has undeniably shaped modern comedy, their influences even felt at this moment in so many movies and TV shows that we all watch, they deserve to have their story told in how they broke new ground for comedy in Chicago, ImprovOlympic, and more (as well as created an entire new discipline within the art form of comedy).

So, it’s nice to hear that this biopic of said story Del & Charna will be handled by the very talented and capable hands of Kay Cannon with a script from Rich Talarico and Alex Fendrich. Cannon’s last feature was the very satisfying Blockers and we’re very intrigued to see what she’ll do here.

Emily Heller Has a Secret Society Comedy in Development at NBC

Emily Heller Has a Secret Society Comedy in Development at NBC

Not only is the brilliant Emily Heller developing a project at a major network and said project focuses in on “…Beth, a struggling reporter who is tired of feeling invisible in her small town and recruits other women to help take over a dying branch of an all-male secret society, but one of Hollywood’s great comedy power players Kay Cannon (Blockers, Pitch Perfect) is attached to EP along with Laverne McKinnon.

Keep your fingers crossed (or whatever superstition you subscribe to) that this gets a green light so we can see what they cook up.

We didn’t get a proper chance to give some well deserved praise for Blockers when it had its theatrical run, so we’re doing it right now, right here.

When it comes to big to mid-size studio released comedies (as opposed to the dramedy fare that makes the rounds at Sundance or TIFF), genuinely laugh-out-loud broad films are hard to come by over the last few years.

Blockers, directed by Kay Cannon and written by Brian and Jim Kehoe, blends physical comedy, raunchy humor, and a coming-of-age story quite nicely. Also, it’s a great original female comedy that isn’t being redone as a female version of a previously male-led comedy. It’s probably been said many a time already, but if you’re looking for a Superbad or Can’t Hardly Wait for 2018, Blockers might be what you’re looking for.

Also, John Cena continues to delightfully surprise in holding his own with well-respected comedic stars Leslie Mann and Leslie Mann.

So, with that in mind, go get Blockers on Amazon or iTunes right now. 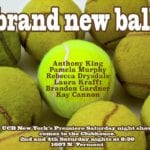 Brand New Ball’s run starts this Saturday, August 13th. As with almost all of shows at The Clubhouse, admission is free, but donations are encouraged to support the venue.

Innovative clothing company Betabrand has, for their Fall Women’s Collection, gathered up a bunch of comedy folks to feature their collection. The likes of Kay Cannon, Danielle Stewart, Janie Haddad-Tompkins, Anna David, Laura Krafft, Alana Johnston, Carrie Kemper, and more show that you don’t have be to intensely brooding or too overjoyed when showing off your new threads, especially when they have crazy patterns like a brain scan as Betabrand likes doing.

Watch a video lookbook/teaser as well as a bunch individual profile/interviews here.

Modern Family’s Jason Winer and Pitch Perfect/30 Rock’s Kay Cannon are teaming up over at CBS for a single camera comedy project that might be worth keeping an eye on.

Hopefully, CBS keeps the next few comedy projects they pick up for their development slate along the lines of this one.