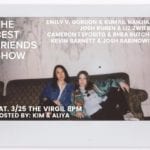 Watch and enjoy See You Around here.

The name Tond should clue you in the wry, existential humor that flows through every frame of this short film.

Kelly Hudson wrote, starred in, and edited it and plays a lonesome old man named Tond looking for someone, anyone to connect with. The result is pretty wonderful and, we’re betting, will make you feel less alone in the universe. Josh Ruben and Vincent Peone direct and it’s another great offering from JASH via go90.

All the voiceover that you hear on commercials or telling you what time your favorite shows are on are actually recorded by a real person in a recording booth where they say those lines over and over and over.

As you can imagine, that can drive you as well as the people doing the recording a little crazy. So, naturally, a few takes in they may go off the deep end with what they’re recording.

This is the premise for CH2’s Most Insane VO Ever series with Josh Ruben, Kelly Hudson, and Ben Rameaka that we’ve enjoyed and we hope you’ll throughly enjoy too.

Basically, College Humor’s Precious Plum with Josh Ruben and Elaine Carroll continues to be on such roll that it’s getting close to being worth having Here Comes Honey Boo Boo on the air just so College Humor can parody it.