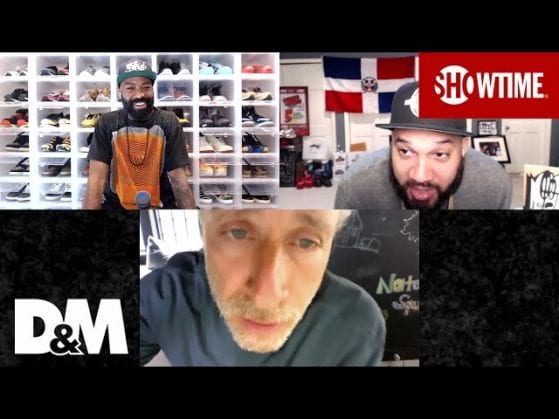 The first part of this full interview (approximately the first six minutes) with Jon Stewart on Desus & Mero is one of the better, more frank conversations about the purpose and philosophy of comedy when times of strife, tragedy, and horror strike.

As we are beset with all three very acutely every single day of the pandemic, doing a recurring late night talk/satirical news show is as tricky as it has ever been. What can you do to talk about the world and lift spirits? How up would you even be given the the weight of the world already being unbearable, but getting heavier every few hours or so? Stewart and Desus & Mero relate their experiences with The Daily Show and this current time that’s a maelstrom of so many awful things all at once to get to some answers to those questions.

Please watch and listen to here

Night of Too Many Stars Is This Saturday (and HBO Made Sure to Redo This Promo Sans Louis C.K.)

November 13, 2017
Uncategorized
hbo, jon stewart, night of too many stars

The big annual TV special Night of Too Many benefiting programs for autism was set to be even bigger as this is the first year that the live event will be broadcast on HBO rather than Comedy Central.

Jon Stewart and a whole boatload of, as the name suggests, too many stars do various bits through the evening in order to raise money. Until last week, one of those guests was Louis C.K., then all the fallout of his sexual misbehavior claims being confirmed happened resulting in C.K. effectively having his career stripped away from him.

So, this promo was actually promptly redone to make sure C.K. was completely severed from the event.

All of that being said, it still has “too many stars” and you should set aside time to watch and support on Saturday, November 18th on HBO at 5PM/8PM PT/ET.

October 3, 2017
Uncategorized
hbo, jon stewart, night of too many stars

As Jon Stewart has shifted from The Daily Show at Comedy Central to various projects at HBO, the gigantic annual benefit that raises money for organizations servicing autism has also moved to the premium cable network.

This promo with Jon announces that this latest Night of Too Many Stars will happen on Saturday, November 18th. No specific line-up is given, but you can trust, that between Stewart and HBO, this benefit show will live up to its name once more.

A Score and 1 Year Later, Jon Stewart Lines Up His Next Two Stand-Up Specials at HBO

A Score and 1 Year Later, Jon Stewart Lines Up His Next Two Stand-Up Specials at HBO

If you listen closely, you can hear the giant sigh of relief from HBO as these are two big time comedy specials that didn’t go to Netflix.

Before his stint in changing comedy, late night, television, and the entertainment landscape in general at The Daily Show, Jon Stewart made his name through doing stand-up comedy. He had specials, his last one being from HBO 21 years ago, under his belt. Being the host and face of The Daily Show for all those year just took time away from him getting up on a mic regularly.

His animated project at HBO didn’t quite work out, but we are more than happy to see a Jon Stewart comedy special or two (or three if you count him hosting another round of Night of Too Many Stars) in the not so distant future.

Comedy and TV legend Jon Stewart has always been in the corner of those who put their life on the line as military servicemen, firefighters, police officers, etc., especially those who have done so and suffered wounds of any kind.

So, co-anchoring The Warrior Games with ESPN mainstay Hannah Storm tomorrow is kind of up his alley.

Look for Stewart and Storm to cover the event live on a special edition of SportsCenter, Friday, July 7th 4PM PST on ESPN.

Turns out that Jon Stewart was concocting a show where he could, in an animated form, satirize the news on the same day. Pretty cool, huh?

Unfortunately, the news breaks too fast and they couldn’t lock down a workflow that would keep pace with whatever nonsense Trump is causing from hour to hour and both parties have opted to suspend making this project into a reality.

Don’t dismay though. Stewart still has something in the works at HBO that will be announced soon.

Apparently, Jon Stewart misses being behind the desk. Thus, he came from underneath the desk and shared some words of wisdom with the media in what he calls a break-up in contrast to the “war” that Bannon paints in regards to Trump and the media.

Luckily, he probably can pop in almost any show of the Daily Show alums.

Also, don’t forget that Jon is supposed to have an animated HBO show coming sometime this year.

Jon Stewart also made his latest appearance on Colbert by taking some fashion cues from the new POTUS taking note of how Trump doesn’t know how to wear a tie correctly.

Oh, this is probably a good time to remember that Stewart still has something brewing at HBO for this year.

“We were the destroyers of men and creators of empires. I think that generally is satire’s role and has always been: the rise and fall of civilization at our whim,” Stewart said facetiously, jokingly adding, “I would have probably allowed Hillary to come a little closer in the Rust Belt, but I still think I would have given Michigan to Trump. I had a little something going on where I was going to give [Al] Gore Florida. There was a bit we had planned that was going to hand Florida to Gore.”

But in all seriousness, Stewart says he doesn’t think satire has that much influence, something he hopes the book [The Daily Show (The Book) An Oral History as Told by Jon Stewart, the Correspondents, Staff and Guests] illustrates.

At a NY Times discussion on the recently released Daily Show oral history, Jon Stewart tried to inject some reality and hope in talking about Trump’s win. Stewart heartily believes that this isn’t the end of America and that it is still the same country with the same people as it was before the election.

Along those lines, Stewart explains, as seen above, that the idea of him staying on as host of The Daily Show wouldn’t have changed the outcome despite some people’s finger-pointing saying otherwise.

Jon also went on to precisely dissect the media coverage, which was always a central focus of his run at The Daily Show, of the election and their obsession with the ratings grabbing headlines and failing to focusing on the actual policy issues.

All of this should inform Jon Stewart’s upcoming animated cable news parody on HBO, which will be more relevant than ever when it premieres.

Last night, Trevor Noah’s interview with outspoken conservative pundit Tomi Lahren showed that Noah can own The Daily Show with his own voice that’s distinctly different from Jon Stewart.

In transitioning from the cultural institution that was The Daily Show with Jon Stewart, many different strategies have been employed in having Trevor Noah take the baton successfully from Stewart.

Accomplishing that has been tricky, to say the least, with the departure of longtime favorites Stephen Colbert, Samantha Bee, and John Oliver to do their own late night show elsewhere and having much of America meeting Noah for the first time as a host of The Daily Show rather than the insanely popular, globe trotting comedian first.

In an interview that reaches almost 30 minutes, Trevor might have found the groove that will see him through as the host and these upcoming years of the Trump Administration.

It’s not Stewart’s famous takedown of Jim Mad Money Cramer, but that’s not what suits Noah. Instead, poise and calm let him have a rational debate with the fiery Lahren and gave room to pick apart her arguments at his pace with the occasional satirical poke here and there. It’s engaging on Noah’s terms and might be precedent for more counterpoint-type guests for him in the future.

Watch and see for yourself in full, extended interview at the link above.

“The Daily Show (The Book): An Oral History as Told by Jon Stewart, the Correspondents, Staff, and Guests” Out Now

Without too much time passing since Jon Stewart left his post as host of The Daily Show, you can see that his influence on comedy, television, political discourse, satire, and the media as a whole is undeniable.

The oral history captured in The Daily Show (The Book): An Oral History as Told by Jon Stewart, The Correspondents, Staff, and Guests should give you an unprecedented look as to how that happened.

Vulture points out some big takeaways from the book in case you’re not already intrigued from Kilborn’s absence in the book to details on Stewart’s take down of Jim Cramer.

Get it from Amazon here.

Last night was the final episode of The Nightly Show with Larry Wilmore. Unfortunately, that marks far too short of a run for the series, especially in the heat of an election year.

In their final half hour of air time, Jon Stewart paid a visit and offer some beautiful, sincere words of encouragement (including a mention of what David Letterman told him when he faced cancellation). After that, Larry Wilmore explained why the map on their set looks like it’s upside down and detailed the mission statement of The Nightly Show, which should be a goal for the rest of late night going forward.

You’ll be watching at 11:30PM on Comedy Central tonight, right?

If you’ve seen any of Jon Stewart’s recent appearances on The Late Show with Stephen Colbert, you can reasonably assume that Jon will be coming back to having his own show with full force.

Also, the fact that he’ll be on HBO and it’ll be animated satirical parody of cable news would make us guess that Jon is definitely not sparing any of his well-channeled, honed, sharpened comedic verve (i.e. business as usual).

If you’ve been pining for Jon Stewart to do what he does best in this election year, pine no more.

Last night on The Late Show with Stephen Colbert, Jon took over the desk, albeit in a little more casual attire, and gave us all a beautiful 10 minutes of classic Daily Show with Jon Stewart goodness that picked apart Sean Hannity’s praise of Trump in comparison to Hannity’s criticisms of Obama.

Yes, that includes burns on Arby’s, making fun of the way Trump eats pizza, and a Rant done only the way Stewart can do it.

Please enjoy this gift from Jon Stewart that we can only hope that we get more of soon under his HBO deal.