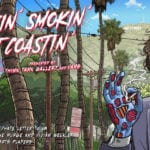 If you’re wondering what people are doing at the edges of comedy in terms of experimenting with the form, challenging methods, etc., you might want to check out The Idiot Hub.

The Idiot Hub is an absurdist comedy collective, started by one John Gilkey, that likes to peel back every convention and trope of comedy that they can in favor of something silly and visceral. Starting off in 2013 as the ensemble known as Wet The Hippo, they have since expanded into other shows that you might have heard or seen around LA such such as The Murge and The Vivian Beckley Performing Arts Players and classes.

Typical performances will have a very sizable cast and aim to be more interactive, very physical, defy expectation, and be absent of a “fourth wall”. For instance, The Murge will have Gilkey pick and guide/heckle players into some sort of crazy bit as if a stand-up was directing a very otherworldly improv scene.

The Murge and The Vivian Beckley Performing Arts Players will be doing their next show at The Think Tank Gallery in Downtown LA as part of Drinkin’ Smokin’ & West Coastin’ on Saturday September 9th starting at 9PM.