As a comedy horror series, Stan Against Evil is already at certain level of funhouse chaos, especially having had two seasons under its belt.

From the looks of this season 3 teaser unveiled at Comic-Con, they’re raising their own bar on how bonkers they want to get including sentient puppets and their own version of Mulder and Scully. We’re on board for all of that and more.

See for yourself here, then look for the season premiere on Halloween on IFC.

Stan Against Evil season 2 is creeping up as its premiere is set for Wednesday, November 1st at 10PM on IFC.

As you can see in the trailer, there’s no shortage of John C. McGinley saying something “badass” while fighting witches, demons, etc.

Stan Against Evil Season 2 Gets Its First Teaser

Your new favorite comedy horror series, Stan Against Evil, will be returning for season 2 so long as you make it through Halloween night. That’s right, season 2 is premiering on IFC on November 1st.

As you can see from the teaser, Stan has more than he can handle alone (even more so than from season 1) and Dana Gould is definitely having fun being traumatized in his own show.

Looks like Stan/John C. McGinley has plenty more demons to dispatch and cranky quips on the changes in society and culture as time marches forward.

Overall, we’re happy to hear that more TV by the brilliant Dana Gould will be made in 2017.

Cable TV is getting another horror comedy this evening with the series premiere of Dana Gould’s Stan Against Evil. If you’re missing Halloween already, this might just be for you.

The show officially kicks off at 10PM, but you can peer into the creepy world the show is set in with all the off-kilter characters (aside from the demons that is) that inhabit it right now.

Dana Gould’s Stan Against Evil Gets Its First Trailer

Stan Against Evil, the horror comedy from the mind of the brilliant Dana Gould, will be coming next month to IFC.

Specifically, the series premiere will be on Wednesday, November 2nd at 10PM when John C. McGinley gets to killing demons with the extreme prejudice that can only come from cranky old baby boomers.

Get a taste of what’s to come in this first trailer here. 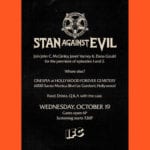 Yep, you can watch an exclusive premiere screening of Stan Against Evil in a cemetery.

Get your free tickets here.

What started as an idea of for a short film, has now turned into Dana Gould’s horror comedy series Stan Against Evil at IFC that has John C. McGinley as an Archie Bunker type that has to fight hordes of demons and the undead.

If that sounds enticing to you, get a look at the first preview clip of McGinley as Stan saving, kind of, Janet Varney from an undead witch.

Watch Delightful Trailer for The Discoverers

Here’s nice way to start capping off this week with a trailer for The Discoverers where a family gives into their grandfather’s Lewis and Clark obsession starring Griffin Dunne.. Think Nebraska meets Little Miss Sunshine meets Lewis and Clark. Also, there’s some cameos from the great Scott Adsit and John C. McGinley.

See for yourself with the trailer here.