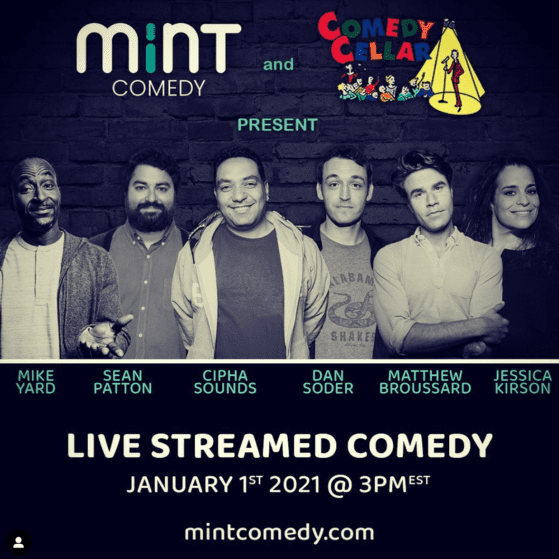 No matter how lauded or venerable it may be, seeing any comedy venue survive these times is a blessing. There have been plenty of closures of celebrated comedy institutions around the country and there will very likely be more as the latest stimulus bill will likely fall short of what many venues need in terms of relief.

With that in mind, it’s great to see that The Comedy Cellar, one of the most respected comedy clubs in the country, is still standing as they get ready to earnestly put on a new round of virtual shows via Mint Comedy.

The very first one of these will happen on the first day of the new year at 12PM PT/3PM ET. The line-up is worthy of you being up that early post-NYE with Sean Patton, Dan Soder, Jessica Kirson, Mike Yard, Matthew Broussard, and Cipha Sounds (the sort of line-up that you’d see at the Cellar in the before times)

Tickets for live-stream access are only $7.99 and you can (and should) get them here.

Undoubtedly, you’ve seen that there have been long lines for early voting and the ones for the official Election Day on Nov. 3rd is very likely to be no different and possibly even worst.

So, Abortion Access Front is swooping in to help folks past the time (in many cases several hours) while they’re waiting to vote in one of the most important elections of our lifetime. They’ll be doing a 12 hour live-stream marathon of comedy to aid in making it through some of the longest lines that people will have ever had to stay in with the comedy stylings of Baron Vaughn, Alonzo Bodden, Jenny Yang, Judy Gold, Jessica Kirson, Erin Foley, DeAnne Smith, and many more.

Abortion Access Front will be live-streaming Vote. No Joke. on Nov. 3rd 9AM PT/12PM ET to 9PM PT/12AM ET. You’ll be able to watch it all for FREE via Abortion Access Front social media platforms on Youtube, Facebook, @abortionfront on Twitter, as well as Comedy Hub’s Twitch channel.

If you’ve already voted, you can just enjoy a madcap marathon of great comedy that whole day while trying to not think about the results taking probably a week or two to count.

Pick of the Day: Jackie and Laurie Present 7/27

So, any time that Jackie and Laurie put together a show, we feel it’s our duty to inform you that you should really check it out. Not only is their the perfect chemistry between Kashian and Kilmartin, but they always gather a fantastic line-up of women comics. This time they have Erin Jackson, Aida Rodriguez, Jen Kirkman, Jessica Kirson, Ophira Eisenberg for their latest live-streamed (via Flappers) Jackie and Laurie Present on July 27th at 7PM PT/10PM ET.

Tickets are only $10 and you can (and very much should) go get them here.

Man oh man, the many voices and asides (literal asides from herself to herself) from Jessica Kirson are such a delight in this set from this late night set on last week’s Tonight Show Starring Jimmy Fallon. It’s the perfect preview for her special Talking to Myself premiering on Comedy Central on Dec. 6th at midnight.